Shawn Watson cleared up some of the confusion over the quarterback/wide receiver miscommunication against Kentucky by telling reporters after practice on Tuesday: "Everybody thought Teddy was having a bad day. Not really. We had receivers running the wrong routes"

There you have it.

So William Gay jumped offsides on a field goal during Pittsburgh's loss to Cincinnati on Monday Night Football, which made people reflective and sad for obvious reasons.

William Gay jumps offsides on a field goal. An entire city pours itself a drink with shaky hands, stares out a window and tries to forget.

But the craziest part of the story is that the Bengals' long-snapper was the same friggin' dude who was snapping when Gay jumped offsides against Rutgers back in '06.

Former Rutgers long snapper Clark Harris - like Gay, a member of the 2007 NFL Draft class - now serves in the same role for the Bengals. So the same guy that drew Gay offsides on a Jeremy Ito missed field goal in that memorable Thursday night loss did the same thing almost six years later.

Ito did miss the first attempt and made it on the second in 2006, sparking a field rush and upset of a top-five U of L team. Bengals kicker Mike Nugent connected from 41 yards out anyway on his try Monday night.

Nonetheless, you can now pick your jaw up off the floor.

Congrats to the Louisville women's golf team on winning the Cardinal Cup tournament, and additional to congrats to U of L's Laura Restrepo on claiming the tournament's individual title. 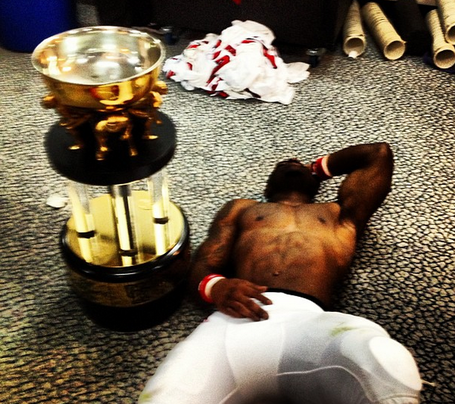 A standard Louisville/FIU preview from the AP.

Chris Hatfield over at The Crunch Zone says that Louisville fans shouldn't be concerned about the recent basketball decommitments.

Jeff Goodman says Kansas is the deepest team (insider) in the country heading into the 2013-14 season, but Louisville is just a step behind them.

This team can legitimately go 10 deep. There are guards, wings and bigs. Rick Pitino can play the way he wants, running and pressing and rotating guys to keep them fresh. The perimeter has Russ Smith, junior college standout Chris Jones, returning wings Luke Hancock and Wayne Blackshear, freshmen Terry Rozier and Anton Gill as well as recovering wing Kevin Ware. The frontcourt may have lost Gorgui Dieng, but will still feature Montrezl Harrell, Chane Behanan and backup big man Stephan Van Treese. Pitino also has walk-on Tim Henderson, who sank a couple of key baskets against Wichita State in the Final Four, and might also be able to get something from Mangok Mathiang, a 6-foot-10 athletic frontcourt player who sat out last season.

The college football nerd stats are actually a little bit more impressed by this year's 14-point win over Kentucky than they were by last year's 18-point triumph.

Going to have to start using "legit sleeper" in ridiculous situations a lot more.

Also, if Lyle and Alexander wind up at DePaul, I will never intentionally read another thing about basketball recruiting again. That is a 100% promise.

In a somewhat surprising move, class of 2014 star Isaiah Whitehead will announce his college decision on Thursday, which means Louisville is out of the equation.

Despite their enormous struggles so far this season, Florida International is a team Louisville won't overlook if only because of the way the Panthers have played the Cards the past two seasons.

Bernie Quill with a Teddy 4 Heisman spotting at the Cabbage Key Inn Restaurant in Fort Myers, which just so happens to be the new home of 2006 Lou Groza Award winner Arthur Carmody (the city, not the restaurant). 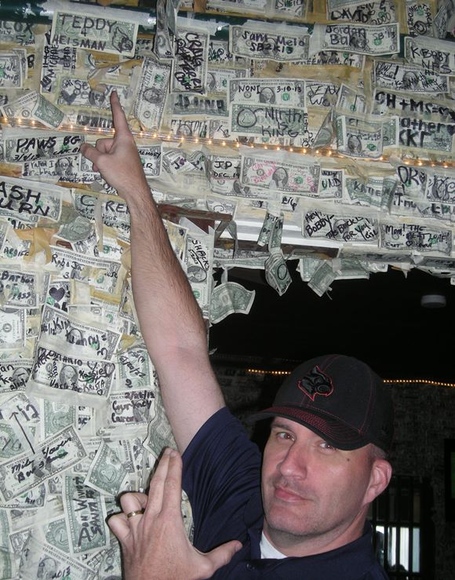 Cards takin' over the FM.

Teddy Bridgewater checks in at No. 4 on USA Today's latest Heisman Watch.

Bridgewater continues to deliver, even if spottily against rival Kentucky. His biggest issue remains the Cardinals' soft schedule, one devoid of chances for prime-time excellence.

The secret to the success of the Louisville defense so far has been its ability to stop opponents on third down.

Some on the field highlights from Saturday courtesy of U of L:

Initial Halloween costume idea: Guy Who's Tired Of Hearing About Louisville's Schedule. I just hope no one else comes as the same thing.

And finally, FIU quarterback Jake Medley sustained a concussion during last week's loss to Bethune-Cookman, which means backup E.J. Hilliard could get the start against the Cards. Hilliard, who was Teddy Bridgewater's backup in high school, saw his first college action in last season's game against Louisville. He's also played in all three games this year.