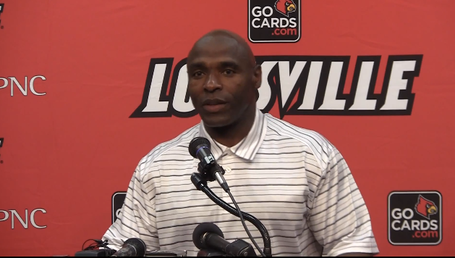 --One of the toughest tasks for our staff is to get our teams motivated and prepared against a team that it's highly favored against. I want our team to play like they constantly have something to prove. We're really never playing against an opponent, we're playing against ourselves. You can never be satisfied, satisfaction leads to upsets.

--FIU is a team that came here and beat us two years ago and that almost beat us down at their place a year ago. Obviously we have a great deal of respect for them.

--You should never expect a blowout, especially in a rivalry game that's on the road. We knew we were going to get their best shot, especially early. Both defenses really dominated that game in the first half, and then we were able to score on our first three possessions of the second half and get some separation.

--I think we need to play a little bit more man on defense and let our corners lock down on opposing receivers.

--We went to Lexington and beat UK two years ago and then came home and lost to Marshall. We can't have something like that happen again. We're going to have a great crowd, I was really proud of the way our fans followed us to Lexington.

--I think we're going to start to see more of the Senorise Perry we saw last season going forward. That long run was great to see.

--We've pretty much been going with Senorise and Dyer on first and second down, and Dominique on third. It's a nice three-headed monster.

--Keith Brown is continuing to work his way back and will keep playing the reserve role we saw from him on Saturday.

--The team has been taken over by the players because we have such strong leaders. I couldn't say that a couple of years ago.

--Our offensive line did not block well in the first half and our secondary gave up some big plays in the second half. We know we have a lot of room for improvement.

--Lorenzo Mauldin, the way he practices is the way he plays. That's how hard he goes. He's fun to watch. Guys don't like doing drills with him because he goes so hard.

--We have to get our guys to understand that we're not going to go score every time we touch the ball. That just doesn't happen when you play good teams. Our guys have to understand that and pick each other up, and I think for the most part we did a good job of that on Saturday. 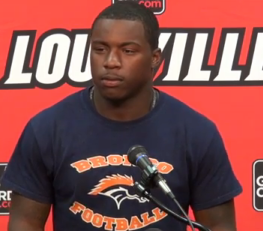 --I think I've played well so far this season, but I could definitely be better. I need to go in and watch more film and keep improving, and that's my mindset heading into Saturday.

--I'm missing too many tackles right now. I need to stay lower and wrap up.

--Third down is what coach calls the "money down." You have to do whatever it takes to get off the field.

--It's great having Keith Brown back on the field. He just gives our defense another weapon.

--Tackling in space is key for our defense, especially with the way the game is now where so many offenses are trying to spread you out.

--FIU has played us really well the last couple of years so we know we have to be prepared.

--Louisville/FIU is sort of a rivalry because so many of the players have played together or against one another in high school or little league.

Video available on The C-J's site.