'Tis the season for bird on bird love. Or something. Whatever, you're not even reading this right now.

Charlie Strong showcased some pretty...strong...appreciation for the job Mark Stoops did when the two shook hands following Louisville's win.

The-Voice Tribune's awesome gigapan image is back with this crowd shot from the Louisville/Kentucky game on Saturday. Look for me hanging over the top of the stadium.

Couldn't be more thrilled to have Mergatroid Skittle on the train.

It will be impossible next season for U of L to top the record it just set for season football tickets sold. Jonathan Lintner explains why.

Season ticket numbers will drop next year when U of L transitions to the Atlantic Coast Conference, as U of L will be required to hold the 5,500 visiting tickets for the UK game required by the teams' contract. This year, with the Cardinals playing the Wildcats at Commonwealth Stadium, U of L was able to limit its visiting section to the American Athletic Conference's mandated 3,500 seats.

"This year, we sold out of our season tickets and the only thing we have for single games are what the visiting team doesn't take on the front end or returns to us if they realize they don't need what they took," said Brad Barber, U of L's assistant athletic director for operations and tickets.

"What we did this year - and we won't be able to do it next year because Kentucky will take 5,500 - is we got all the preliminary numbers from teams for what they wanted."

Squint hard and you can see that Michael Dyer is the No. 1 running back on this week's depth chart. 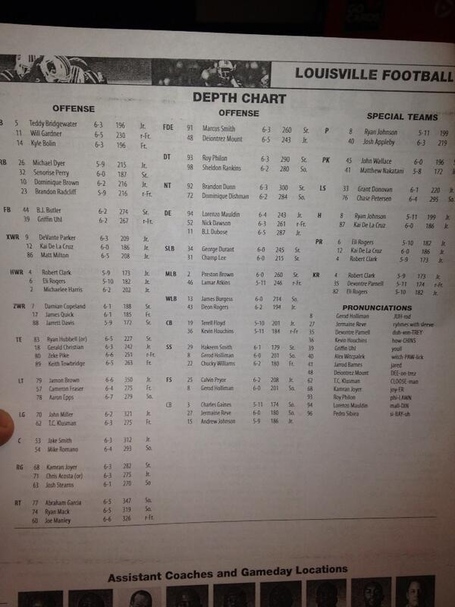 Teddy Bridgewater is still the starter at quarterback. Thanks to Steve Jones for the pic.

The 16th-ranked Louisville men's soccer team snapped a two-game losing streak with a 4-2 win over Cal State Bakersfield on Sunday. You can check out the highlights here.

Louisville ranks in the top 20 nationally in both total offense (20) and total defense (12). The Cards are also No. 4 in scoring defense and No. 9 in passing offense.

Striking the "Red Rage" pose with your baby is the next big thing. 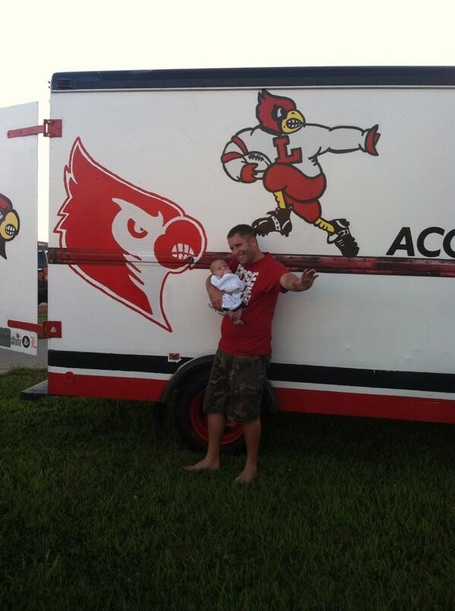 Might as well call the governors cup the Louisville cup because that's where it will be from now on.

We also found out that Louisville is a pretender to the top 10. Kentucky, indisputably the worst team in the SEC, didn't even play very well and kept it fairly even against the Cardinals. Louisville is a a fun team to watch because of Teddy Bridgewater -- but there's no way on earth they're a legit national title contender.

That may have been about seven definitive statements too many to make in the middle of September. The guy goes on to give his national top 10, which features five SEC teams.

Could the MLS be coming to Louisville at some point in the next decade?

The LA Times says that the only SEC defense that stood out this weekend was Kentucky's.

Keith Towbridge is a man of the people.

everytime I see the WNBA games on I watch them.. they get no love so I try to show love

Though Kentucky's overall performance on Saturday was encouraging, the day did little to clear up the quarterback controversy between Max Smith and Jalen Whitlow.

I'm calling it right now: the eight day-stretch between the Rutgers game on Thursday, Oct. 10 and the UCF game on Friday, Oct. 18 is going to be the best one of the fall. Weeknight games on ESPN are always a blast anyway, and with the home fans desperate for quality competition, PJCS should be about ready to explode on both nights.

National Football Post is already looking forward to the 18th.

• Mark Friday, October 18, on your calendar. That is the date of UCF at Louisville. The Knights proved in their win over Penn State that they can be a legit threat to the Cardinals in the American Athletic Conference. They have the offense, but can that 'D' contain Teddy Bridgewater?

If UCF can at least keep things close against South Carolina in a couple of weeks, then there's a chance that U of L could wind up getting a shot at a ranked opponent after all.

God, I'd give anything to give this year's team next year's schedule.

Your complete review of the past week in the world of Louisville sports:

U of L Red/White scrimmage tickets are officially on sale.

And finally, if you're a male student at U of L, come out to the first Meat & Potatoes program at The Avenue (Cardinal Towne) tonight where I'll be serving as a guest panelist. There's a wing eating competition at 7:15 before the panel discussion begins at 7:30. Should be a good time.