Two touchdown, never-really-in-doubt win against archrivals should be celebrated for what they are, not what they are not. But still though a #beatemdown would have been nice.

The Louisville Cardinals defeated their arch-rivals on the road by the largest margin in Lexington since 2003, in a game that was not in doubt from the beginning of the 3rd quarter on, by dominating time of possession and holding UK to 0-13 on third downs.  Only a late TD against prevent defense and a blocked FG kept the game within 14.  Our leading rusher had 100 yards and 2 TDs. We caused multiple turnovers and our defense played aggressive and loose.

Why are we so disappointed?

Sure there are things that keep popping up.  The run game/OL looked bad early, the special teams is going to cost us, the playcalling was not as good as it should have been.

But I think it's none of those things.  We recognize our team is not perfect.  What is going on is that this is exactly what Charlie Strong warned against - we need to take joy in each of our wins this season because this team is really special.  UK is not bad, and their improvement from the WKU game is noticeable.  They played with a ton of emotion in the first quarter and knocked us out of rhythm.  It's a rivalry game, and the 2005, 2007, 2009 and 2011 games in Commonwealth ended with either a loss or a less impressive win.  That's how it goes.

So, why are we so disappointed? I think it's a couple of reasons.

Teddy Bridgewater is an amazing quarterback.  We are so spoiled that any incomplete pass or any (gasp) bad pass is strange.  Even when he misses throws by a small margin it's almost shocking.  Must have been the WR's fault. 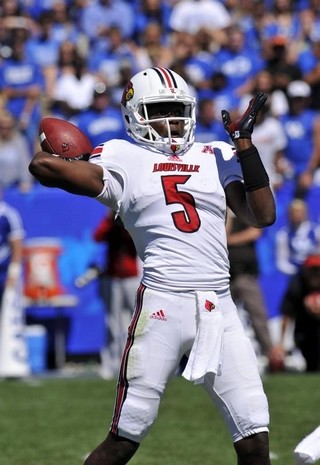 That's not fair to Teddy, and expecting him to go 25-27 every game is just not realistic.  On the bright side, this means that Teddy has room to improve.  That's a good thing.  One of the reasons The Matrix was so much better than the sequels was that watching Neo grow, make mistakes and become who he was made it more interesting.  In the 2nd and 3rd movies the things he did were like, well, of course he's going to do that, he's the one, and it was boring.  Let's not turn this into a detailed discussion of why The Matrix sequels were so disappointing.  The point is that if Teddy were really perfect every game, would it be fun anymore?  Teddy doing amazing things is amazing because he is a human.  He is not a robot.  Teddy doing amazing things is amazing because sometimes he doesn't.

After an offseason spent listening to UK fans, coaches and players talk tlak talk takl tak talk about recruiting rankings and Air Raids and Stoops Troops and all that, a no-doubt, absolute beat down on their home field would have been extraordinarily satisfying.  I think maybe the players thought that's what was going to happen, and when UK kept it close, they were a little surprised.  The fact they regrouped and ended up winning like they did says a lot about our team.  I'm sure our coaches wanted to destroy them as well (for legitimate, recruiting reasons considering the head-to-head battles we've had and will continue to have) but once it became clear it was going to be a more competitive game than maybe some of us expected, they adjusted and just did the normal gameplan: eat up clock, move the ball, score, build an insurmountable lead and then get out of there with the win.  But then they STILL tried to score another TD, moved the ball well and then missed on 2 straight throws to Parker in the endzone.  I'm glad they did it, even though the playcalling and execution didn't work like we needed it to.

Anyway, UK fans can be proud of their effort, but there's no doubt the gap between the programs right now, and UK is a couple years of talented classes behind before they close it.  With the game being at the end of next season, this is the longest gap in the rivalry between games since the 1924-1994 gap.  Tomorrow will be the only day between now and then UK fans might actually recognize this gap.  By Monday (heck maybe even by tomorrow), they will have scored TDs instead of each turnover and would have won going away.  But there's no doubt they weren't 1 or 2 players away today.  Adding a bunch of true freshman next year, even playing the last game of the season, this season's game has almost no connection with what will happen next year.

So ya, of all the reasons today was the most frustrating, the fact that it was our only chance between now and November 2014 to kick the crap out of UK has now come and gone is what frustrates me most.

This is what bothers me the least tonight.  Every game we play, we aren't just playing against our opponent, we are playing against the schedule, the computers, the 1-loss SEC team to be named later, the "national perceptions" and the look testers.  Considering that we were the noon ESPN game and UK plays 3 top SEC teams over the next few weeks, this was as big of an opportunity as we'll get.....but then tonight I'm fine with this.  Championships aren't won in Week 3.  And by the time I am writing this, UCF has beaten Penn State and all of a sudden THEY are the best team on our schedule.  And we get them at home in the Friday night ESPN game.  So, another opportunity has presented itself, and all we had to do was wait 6 hours.

And look, we just have to win all of our games.  This is Week 3, nothing has changed.  So while winning big and impressively and by bigger margin than Alabama and SC and Florida might make us feel good and get a 5 second mention on ESPN, that will only make a marginal difference over whether we are in the championship game or not.

The biggest factor? WINNING ALL OUR GAMES.  If you were weighting it, that's got to be like 96% of the causation of us getting in the championship game.  I'm just not going to worry about the other 4%.  During the games, of course I'm going to want us to go for TDs instead of FGs inside the 5 yard line and complain about soft defense in the 4th quarter allowing garbage points.  Frustrating.  Style points matter.

But tonight?  Doesn't bother me.  We beat UK by 2 TDs and it wasn't really that close, no one got hurt, Parker made one of the best catches I've seen a UofL WR ever make, the defense looked good, and we beat UK by 2 TDs.   And the best part?  WE CAN STILL GET BETTER.

Next Up In College Football