President Ramsey and the U of L Student Veterans are ready to beat Kentucky.

Though most of the quarterback attention heading into this weekend has been directed at Teddy Bridgewater, it's Kentucky's Maxwell Smith who's coming off the best game of his career.

With all the (deserved) talk this week about Louisville quarterback Teddy Bridgewater, the Heisman Trophy leader, it has been lost that Kentucky's starting quarterback is coming off the best showing of his college career.

It was also the fourth-best pass efficiency performance by a Kentucky quarterback since at least 1985 - as far back as my stats database goes.

Ralph Russo of the AP likes Louisville this weekend, 45-17.

Ladies and gentlemen, it's my pleasure to introduce you to Bloggin' Jeff Walz.

The relatively modest spread for Saturday's game seems to indicate that Vegas isn't buying the U of L hype, which is just a tad unsettling.

I'm going to admit something to y'all: This game terrifies me.

I tweeted about the opening line early Sunday morning, Louisville -7.5, and by the time I landed back in Nashville, Tenn., the line had moved all the way to Louisville -13.5.

Ninety-five percent of all the money is on Louisville, and we've finally settled at two touchdowns.

Why is this line hanging here?

Because Vegas believes that the Louisville story is a bit of a myth. First, Outkick told you that Louisville's schedule is so weak that 26 different teams would be favored in every game. Second, look at Louisville's 2012 schedule. Yes, they put a whipping on Florida, which really launched Louisville as a "top 10 team" story. But the Cardinals beat only two teams by more than 10 points last year. (Granted, one of those teams was Kentucky). They also lost to really bad/mediocre Syracuse and UConn teams.

I believe that Louisville's dominance is a bit of a myth.

And if I'm wrong on this, you guys can call me a complete and total idiot. (Which happens every day anyway on Twitter, but still, I'll deserve it for not picking Louisville to destroy a bad Kentucky team.)

SI says if Mark Stoops wants to gain superiority in the Battle for the Governor's Cup, he needs to hope Charlie Strong takes another job after this season.

So earlier today, Wildcat Blue Nation (aka the best site on the Internet) posted a story centered around the idea that Louisville football doesn't matter and that Cardinal fans are less intelligent than Wildcat fans. The post listed a number of reasons why UK fans should be upbeat and not worried about their arch-rivals.

One of them was the following:

-We can spell "rivalry" and "Governer's Cup"

The problem? That's not how you spell "Governor's." The other problem? The word was also misspelled in the post's headline.

Both hilariously ironic errors have since been corrected, but the Internet doesn't forget.

I am officially headed to Commonwealth Stadium on Saturday for the first time since 2005.

It's been a long time, Lex, I shouldn't have left you. Without a dope loss to throw racist insults to.

JaQuan Lyle shoots down a rumor started by perhaps the creepiest Twitter account amongst the creepiest fan base in college sports. 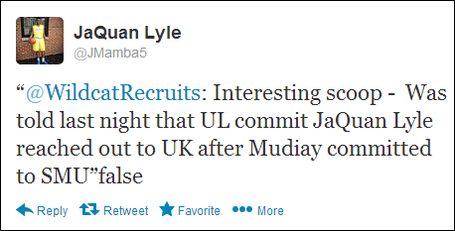 After backing off of his commitment to Florida, three-star OL Ben Knox is now said to be favoring Louisville.

Be safe this weekend, kids.

NBC offers up a preview capsule for this weekend's game.

Louisville junior QB and Heisman Trophy candidate Teddy Bridgewater will try to use all of his receivers against a Kentucky secondary allowing just 147 yards per game and seeking its first interception. Turnovers and sacks might be hard to come by considering Bridgewater has thrown just one interception, been sacked once and completed 76.7% of his passes. He has targeted eight receivers in both games en route to 752 yards and 9 touchdowns. The Cardinals' No. 5 passing game is averaging 406.5 yards per game and 16.9 per completion.

If you're a male student at U of L who's interested in going head-to-head with Shoni Schimmel on a daily basis, this is your moment: 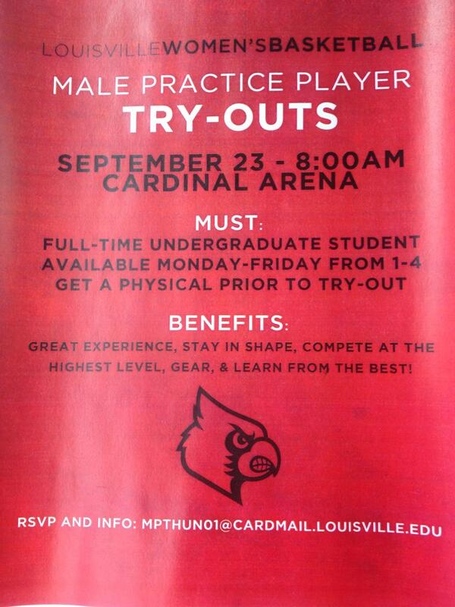 Deadspin wonders if the NFL is blackballing former Cardinal and current free agent Kerry Rhodes because of the rumors about his sexuality.

Louisville is the only team in the country which had five players on The Sporting News' preseason positin rankings.

Heisman Trophy candidate Teddy Bridgewater of Louisville hasn't had to deal with much of a pass rush in his face through the Cardinals' first two games this season. But this Saturday, Kentucky will show him what pressure looks like.

The U of L volleyball team lost a tough, five-setter at Kentucky earlier this week. But it's all good because they got to hang out with Patrick Ewing afterwards.

"I really haven't seen him uncomfortable," Williamson said, according to courier-journal.com. "That's kind of reassuring that he hasn't seen any pressure in his face. That gives us an opportunity to see how he's going to react when we do get pressure on him."

Notice Williamson said 'when', not 'if'?

I did notice that, Chase Goodbread.

UK's freshmen may have not experienced the Louisville rivalry yet, but they still know what it's all about.

The Louisville volleyball team lost a tough, five-setter to Kentucky earlier this week, but that's cool because they got to hang with Patrick Ewing afterwards. 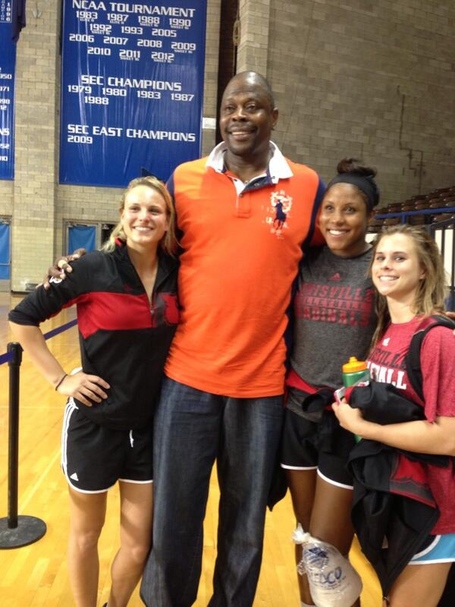 The loss to the Cats drops Louisville to 0-2 this sports season against their arch-rivals (women's soccer lost 2-0).

The best thing Kentucky can do to pull an upset of Louisville is score early.

Only an undefeated season and a national championship are likely to be enough for Texas A&M quarterback Johny Manziel to repeat his Heisman trophy triumph. There's just too much water under the bridge during Manziel's tumultuous offseason, and maybe also too much Bridgewater along the Ohio River in Louisville, Kent. -- Teddy Bridgewater, of course.

The University of Louisville quarterback will most likely be making his junior season his final collegiate one before he heads off to the greener pastures of the NFL as a high first-round pick (perhaps even No. 1 overall). Bridgewater is in a position to make his departure from Louisville a glorious one, capped by not only his draft status but also his Heisman candidacy and opportunity to lead Louisville to a BCS title shot or at least the biggest, best bowl the Cardinals can get as champion of the American Athletic Conference in the school's first and last year in the conference.

But Bridgewater will still have to deliver the goods between the lines. Any stumble along the way could cost Louisville a BCS bowl game, and Bridgewater not only a Heisman trophy but also perhaps a statue alongside Louisville legendary alum Johnny Unitas.

Multiple media outlets are now reporting that former Louisville commit and current Ballard star Quentin Snider is expected to commit to Illinois tonight. Best of luck to him.

CBS re-did its rankings of the best college basketball/football programs at the current moment, and once again Louisville is No. 1.

1. Louisville (7): The Cardinals have a good chance to repeat in our formula again, especially if they can make a third-straight trip to the Final Four. Defending champs might have more talent.

Mark Ennis and I are back on ESPN 680 tonight from 6-8. We'll be talking Louisville/Kentucky with Brett Dawson, Jeremy Fowler and Mario Benavides. Listen live or anytime on ESPNLouisville.com.