Longtime U of L fan Hugh Pritchett Sr. raises a patriotic toast to a Cardinal victory on Saturday. Awesome.

So, this happened last night: 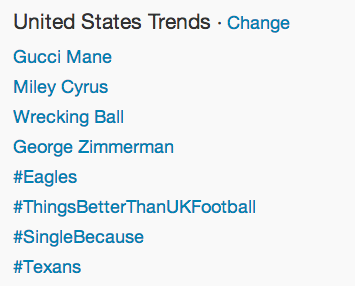 The nation still drastically underestimates the power of the Louisville/Kentucky rivalry. You can replace "power" with "pure, unabashed hatred" in the previous sentence and it still works.

Speaking of the hate, Calvin Pryor and Lorenzo Mauldin haven't been shy this week when asked to describe their feelings about Lexington Basketball Academy.

S Calvin Pryor wouldn't shy away from commenting about it either.

"I heard a comment over the Summer from them about our defense being ‘average'," Pryor stated. "I didn't like that...It's going down Saturday at 12."

DE Lorenzo Maudlin wasn't exactly bashful about his disdain for the Wildcats either.

"I've never liked Kentucky since I've been here," Maudlin noted. "From tweets from my Freshman year to now. Everybody knows I don't like Kentucky."

Those are two young men I would not feel comfortable having on my bad side.

So, there are still a pretty considerable amount of tickets remaining for Saturday's game. Kentucky fans are attributing it to the fact that the new pricing system, which raises the cost for "premium" (Louisville and Alabama) games to a face value of $81, but still...come on.

All we heard about this summer was UK's incredible spring game attendance, and now you can't even get butts in seats for a game against an arch-rival ranked in the top 10? Expect to see far more red than usual inside Commonwealth on Saturday.

This has also sparked a battle-cry from the other side of "yeah, but you all didn't sell out the Kentucky game last year," which is hilarious considering the fact that last year's game was the highest-attended contest in the history of Papa John's Cardinal Stadium. Oh, and Louisville sold out all six home games in 2012.

Step your game up or pipe down, but don't just make up stuff. 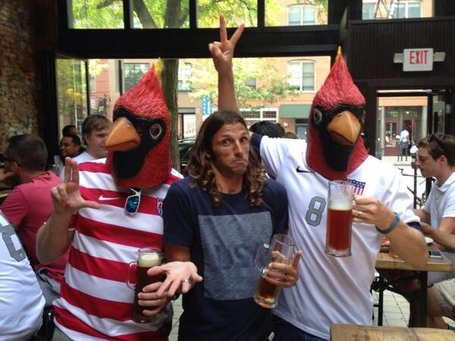 Just keep drinking, Frankie, it'll make sense. Actually it won't, but you'll come to terms with and embrace the confusion.

Shawn Watson told reporters after practice today that Kamran Joyer will start for Louisville at right guard on Saturday. Joyer missed the first game of the season with a leg injury and played sparingly against Eastern Kentucky. He had been listed as interchangeable with Chris Acosta on this week's depth chart.

Stoops on Strong: I have a lot of respect for Charlie (Strong) and have known him for awhile.

Strong says he had no prior relationship with Stoops.

Mark Stoops called his team's Tuesday practice "average," and said the Wildcats need "to pick it up in their intensity."

The Sporting News has Louisville at No. 3 in its new college basketball preseason top 25 for 2013-14.

All-American shooting guard Russ Smith made a surprising decision to play his senior season-surprising in that he (actually his father) had announced he would move on to the NBA Draft. The likelihood that Smith would be undrafted whether he left college this year or in another 10 perhaps convinced him it was wiser to burnish his legacy as a collegian. Louisville probably will use Montrezl Harrell in the middle-and he is prepared for a stellar season-but you have to plunge deep into the NCAA record book to find the last champ with a 6-8 center.

According to SportsInsights.com, only Alabama/Texas A&M has drawn more betting action in Vegas than Louisville/Kentucky so far this week. Over 6,500 bets have already been placed on The Battle for the Governor's Cup, with 92 percent of those taking the Cards to cover the spread.

C.L. Brown placed a nice hidden message in his final C-J story before leaving for ESPN.com. In his wrap-up of the Louisville/EKU game, Brown spelled out "Thank you Louisville" with the first letters of each paragraph. Pretty cool.

Some bad news for Cincinnati (and the AAC), as starting quarterback Munchie Legaux will miss the rest of the season with that nasty knee injury he suffered against Illinois. I know we got on him pretty hard last year after his comments about Teddy, but here's hoping he recovers quickly and fully.

This is having to live with the wrong choice epitomized. 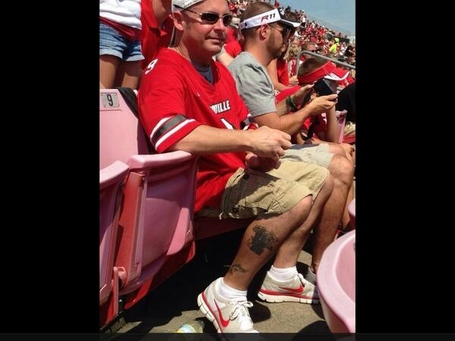 A very happy birthday to one of the best to ever do it at Louisville (or anywhere), Angel McCoughtry.

Cinmeon Bowers, a JuCo basketball prospect who some believed Louisville had targeted, has committed to Florida State.

Charlie Strong and Mark Stoops have a slight difference of opinion when it comes to the topic of how important Saturday's game is for recruiting.

According to PredictionMachine.com, out of 120 FBS programs, Louisville ranks 107th in home field advantage. Before you start throwing things, Alabama ranks 116th and Florida State is dead last at No. 120.

Gerald Christian, who had no trouble with Kentucky during his time at Florida, gets it: 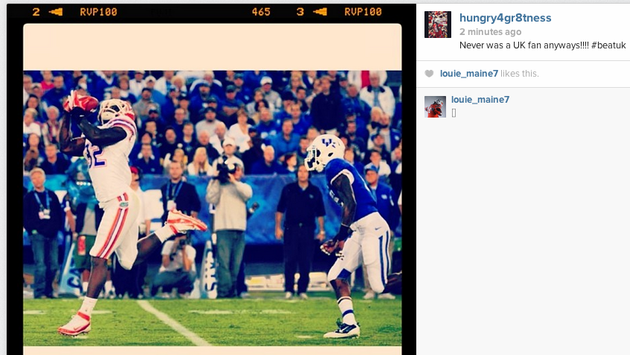 The Cards check in at No. 14 in Football Outsiders' weekly S&P+ Ratings.

@WHAS11Lefkoe if you're looking for a story, my aunt is having a tailgating wedding before the FIU game; 10AM, fairgrounds paved lot

I'll be there with bells on.

For those unfamiliar with Heisman Pundit...

Now in its eighth season, the HeismanPundit.com Heisman Straw Poll is the college football world's most trusted gauge of Heisman voter sentiment. It has been the most accurate Heisman poll in the country during the past seven seasons, with the final 2012 poll correctly picking the top five finishers and the final 2011 poll picking the top seven. This year's poll is made up of 9 anonymous Heisman voters from across the country. Each week during the season they will pick three players. Tabulations for the preseason poll are tabulated like a real Heisman ballot, with three points awarded for a first-place vote, two points for a second-place vote and one point for a third-place vote.

Each week's poll is released on Tuesdays throughout the season at HeismanPundit.com.

And you might have guessed that we probably wouldn't be talking about this if a certain Cardinal signal caller wasn't feeling the love this week.

While Teddy gets the bulk of the love, he's also taking full advantage of perhaps the best receiving corps ever to wear the red and black.

Chris Smith got a tattoo of his brother J.R.'s face on his back. I don't really have anything to add to that.

Patrick Ewing Jr. is in attendance for tonight's volleyball game in Lexington featuring the Cards and the Cats. His daughter, Randi, is a senior for U of L. 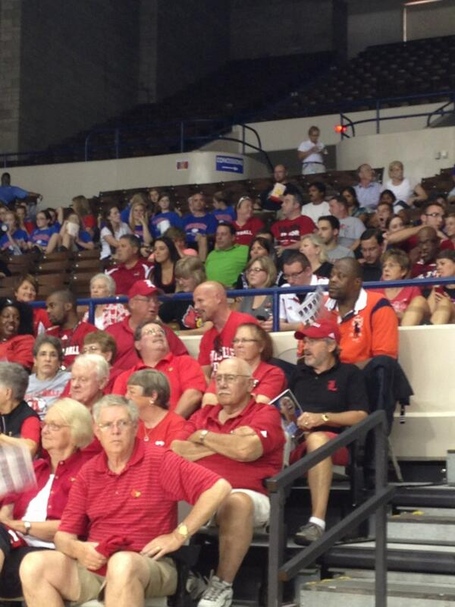 I'm just gonna chalk that shirt up to being infra-red.

The Cards currently lead the Cats one game to nothing.

A Sea of Blue recognizes that the proverbial deck is stacked against the Cats this week, but also notes that crazier things have happened in rivalry games.

Elizabethtown catcher Zeke Pinkham has opted to switch his commitment from Kentucky to Louisville. It's a bold move considering the Cats have had so much more postseason success than their in-state rivals in recent years. What's that? U of L's been to two College World Series since 2007 and UK's never made it out of the regionals? Kid probably made the right choice then.

The latest CBS mock NFL Draft has Theodore Bridgewater going to Jacksonville with the No. 1 overall pick.

Teddy Bridgewater, QB, Louisville: Should the Jaguars "earn" the No. 1 overall pick despite a solid 2013 draft class, general manager David Caldwell and head coach Gus Bradley will have no choice but to look for "their guy" at quarterback as a replacement to Blaine Gabbert. Unlike the Chiefs a year ago, the Jaguars could be in position to choose between a couple of potential franchise quarterbacks. Bridgewater possesses all of the traits scouts are looking for.

Winsipedia hits you with a bunch of numbers about the Louisville/Kentucky rivalry.

Eric Crawford offers up five thoughts on The Battle for the Governor's Cup.

This is probably the most in-depth headline you're going to see all week.