Share All sharing options for: Game Day: Louisville Vs. Ohio

Ohio and Louisville will meet for the fifth time in school history on Sunday. The all-time series is tied at 2-2. The first time the two teams met was in 1956 with U of L earning a 25-19 victory over OU. The most recent meeting took place in 1959 in Athens, where the Bobcats defeated the Cardinals 22-15 en route to a 7-2 season. 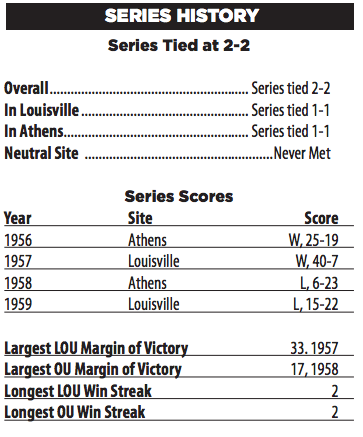 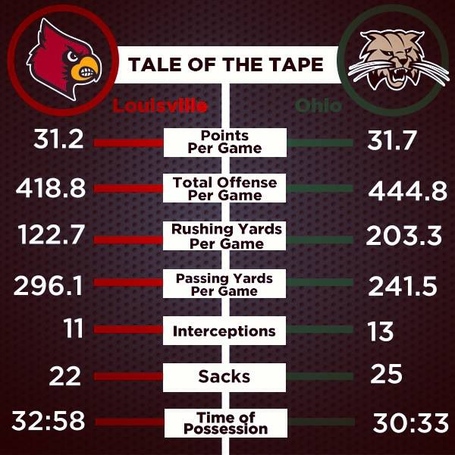 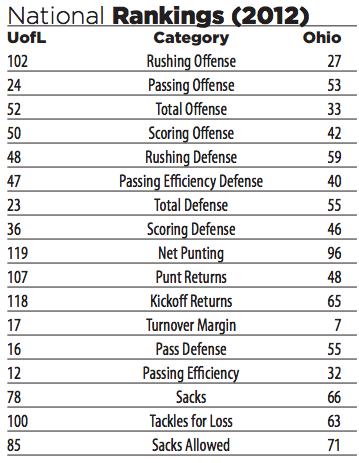 Only Ohio State game I've ever been to, and this happened directly in front of me.

It's the first game of the most highly-anticipated Louisville football season of all-time. The Cards could be playing Doss and this would still be a least a 9.6.

Pregame Meal: No official menu (admittedly not in midseason tailgate form), but appearances by multiple dips, fruit, alcohol and a cookie cake (you're welcome) have all been confirmed.

All the "old" red Louisville Football shirt purchased before last season did was become an icon who carried us through the first half of the year and then served as an undershirt for both the Sugar Bowl win and the basketball team's run to the national title.

The bar: It's way up there, new blood.

I'm going to stretch the bold prediction out to a season-long one and say that Quick actually winds up with more TD receptions than anyone else on the team not named DeVante Parker. He hits paydirt for the first time in the second quarter this afternoon.

20 years old. Hann!! Beating Louisville on Sunday is gone feel better than people who dream of playing on Sundays. Blessed over here 8/31

Why did Louisville football follow me on twitter...They must want this work smh

--Ohio, which has been picked to win the MAC's East Division for a second consecutive season, returns 16 starters from last year's Independence Bowl champions. Among that group is senior running back Beau Blankenship, who rushed for a single season school record 1,604 yards. Also returning is standout QB Tyler Tettleteton, who is the only Ohio signal-caller in history to throw for 2,500 yards in back-to-back seasons.

--This will mark the eighth straight year that Louisville has opened it season with a home game. The Cards have won the last two of those contests, including a 32-14 win over Kentucky last season.

--Ohio opened its 2012 season with a 24-14 upset of Penn State on national television in Happy Valley.

--Last year, the Bobcats ranked seventh in the nation in turnover margin (+1.15) and boasted the 27th best rushing offense in the country at 203.31 yards per game on the ground.

--In just two seasons, Louisville quarterback Teddy Bridgewater has amassed 5,939 career yards of total offense, which ranks sixth all-time at U of L. His 3,718 yards passing in 2012 ranks third in a single season. That passing total ranked 14th nationally in 2012 and his 286 passing yards per game were 18th best in the country..

--Ohio is 0-16 all-time against ranked opponents.

--Tyler Tettleton was one of just four quarterbacks in the country who threw 15 or more touchdowns and had four or less interceptions last season. Tettleton opened the year by going 161 attempts without throwing an interception. Among the four, Tettleton and Alabama quarterback A.J. McCarron are the only two signal-callers who return this season.

-The Ohio offensive line is one of the most experienced units in the MAC. The Bobcats boast an interior core that includes four seniors and collectively has made 43 career starts.

--The Cardinals head into the 2013 season ranked No. 9, the highest preseason ranking in program history.

--Ohio will be looking to win its fourth-straight season-opener.

--An upset win over Louisville would give head coach Frank Solich his 60th win at Ohio.

--The Cards are 11-6 in non-conference games under Charlie Strong.

--Louisville is 7-3 all-time in games played on Sunday. The Cards also opened last season on a Sunday when they defeated arch-rival Kentucky, 32-14.

--U of L is 8-3 in September games under Charlie Strong.

--Louisville is 24-5 under Charlie Strong when scoring 20 or more points.

--"We're not going to be able to sneak up on Louisville. No matter who they'd play their first game, they're wanting to prove they're deserving of their ranking, and their fans will be excited." --Ohio coach Frank Solich

--"You have to approach everybody the same. You can't think that just because they went and beat a big team that they're going to come beat us. We want to go win every game. They're a good football team, and we have to prepare as such." --Jake Smith

--"Growing up, I always told myself that I wanted to go somewhere where I had the chance of being known nationally. I told myself that wherever I went I wanted to leave a legacy as the best in school history, so I kind of dreamed it. Once I got here, the guys around me made it all a reality. I'm just thankful to be a part of this team because it's a bunch of great guys who love ball." --Teddy Bridgewater

--"We've been focusing on (OU running back Beau Blankenship) all summer." --Preston Brown

--"I'd probably say it's the most focused team I've had because it's also a much older team. They understand that they really have to work now because the level of expectations has risen. They want to set the standard for the program and know how to manage those expectations." --Charlie Strong

--"Knowing what we want to accomplish and who we are, that pretty much keeps everyone level-headed." --Teddy Bridgewater

--"The challenge will be every bit as great as the Penn State challenge was, probably more so in terms of the amount of players that they have coming back. They have a Heisman Trophy candidate (Teddy Bridgewater) at the quarterback spot. They have a receiver who could come out early and be drafted high (DeVante Parker), and the other receivers are going to catch a ton of balls. They have got strong, physical people up front, and so it just goes on and on and on." --Frank Solich

--"Louisville is a powerhouse; they're going to be a difficult team. It's going to be a huge environment. The biggest thing will be not to be rattled, because it's rare that we see that many people. If we come out there with some poise and really set the tempo, that will be beneficial for us." --Ohio WR Donte Foster