CCBM doing what the CCBM does on the Great Wall during the U of L MBA program's trip to China.

It's not official until it's announced by ESPN, apparently, but it appears as though Louisville and Indiana will, in fact, be squaring off inside Madison Square Garden on Dec. 9, 2014.

Even though this would be a cool event, I'm a little disappointed that this announcement isn't that the Cards and Hoosiers have come to terms on a long-term contract for an extended series. I get that the ACC and Big 10 schedules are pretty brutal, but there's no reason that these two programs shouldn't play every year.

Athlon got SEC coaches to speak anonymously about their opponents in the SEC, and this take on Arkansas was especially...interesting?

"They are going to be slim in a lot of spots. It's going to take them three years to get a good foundation. It's a product of bad recruiting - which is typical of a Bobby Petrino school. It's the same thing that happened at Louisville that got Steve Kragthorpe fired. Petrino didn't leave him any players. It's the same thing at Arkansas. They have no players on defense. Petrino would load up on offense and leave the cupboard bare. That's why he can't ever get over the hump."

Right. Eighteen returning starters - including a Heisman Trophy candidate at quarterback - from a team that won the Orange Bowl and was probably a game away form playing for the national championship is a bare cupboard.

You're not fooling anybody, Les.

In order to make sure that the program is as well-represented as possible, Charlie Strong has been making his players take interview classes.

I was thinking about the upcoming athletic season the other day and how if the football team's schedu---OH SHIT... 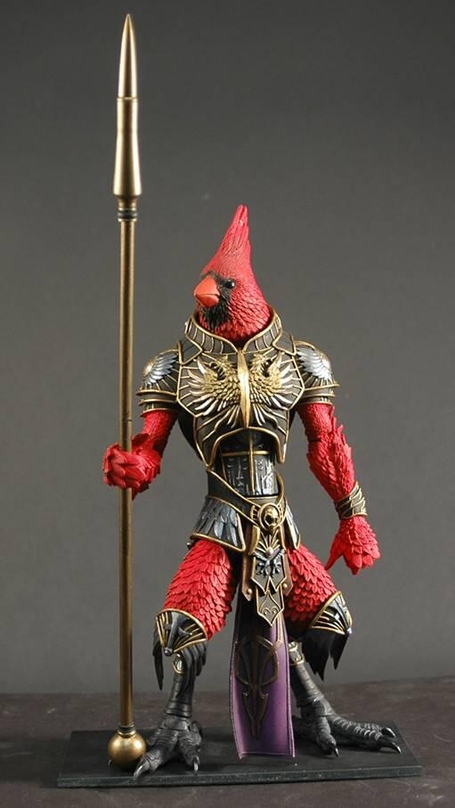 Can you imagine what that thing would do if the UConn Husky even looked at it the wrong way?

Donovan McCrab, would you care to act the scenario out?

FYI, the image came from this Kickstarter project, which I don't understand at all but now completely support.

Louisville Slugger Field is currently in second place in the battle to be crowned America's best minor league ballpark. You can vote for The Slug right here.

It's only fitting that we're finally going to get to see Chicken Knowles play college basketball during the one season he'll share a conference with Louisville.

"We think he presents great problems because of his size and length and ability to shoot the ball and stretch the floor," Houston coach James Dickey told me by phone earlier this week. "We're excited about having him on campus."

You might remember Knowles from Houston's heralded 2012 recruiting class. (If nothing else, you remember a dude nicknamed "Chicken," right?) He was a borderline top-50 national prospect and key component of a recruiting class designed to eventually help Houston -- this historically relevant basketball program that played for the national title twice in the 1980s -- make the NCAA tournament for just the second time since 1992. And he still might do it. We'll see. But that plan was put on hold last September when Knowles, a 6-foot-10 forward, was ruled ineligible by the NCAA.

Consequently, Knowles spent a year away from organized basketball.

But now he's back.

We might not have DePaul Day to look forward to this season, but Chicken coming to the Bucket will be a more-than-suitable holiday replacement. Can't wait to circle the date.

Sports Illustrated says James Quick is one of 15 freshmen to watch this college football season.

Class of 2014 forward Michael Humphrey from Phoenix has a final(?) list of 13 schools, and it includes Louisville.

You might think 13 is a lot, but you give me a five-star ranking at age 17 and I'm giving you a list of my 335 favorites and holding a press conference every day to cut one school. Sorry, DePaul, you may have noticed that your hat isn't one of the 334 on this table in front of me. I'm just looking for a program with a style of play that's a little bit more of a better fit for my game. I also hate losing games.

"Not at all,'' he said. "I know if all of my hard work on this level pays off, then I'll be able to make money on the next level. I feel my education is priceless.

"As long as I can get a quality education, great education, then I have no problem with the guys out there doing what they're doing.''

Bridgewater sounds like so much of a salesman of the amateur ideal that you wonder if he really even means it, or if maybe he was coached to say it. The momentum is strongly against what he was saying. But the thing is, he makes the sales pitch so well, and it's only fair to take him at his word.

And about his autograph being sold for profit on the Internet?

"When we have fan days, or after games when fans and children come out, that's who we do it (sign autographs) for,'' Bridgewater said. "As long as it's going for a good cause, in my eyes, I have no problem with it.''

Good cause? I reminded him his autographs are being sold on eBay.

"As far as selling it, I have no control over that,'' he said. "The day that we have signings, or for little kids at camps, those are autographs I cherish most. Being able to give back to those children means a lot to us.''

That used to be the NCAA's line.

Tim Sullivan writes about the Louisville defense and how it plans to play with reckless abandon this season. 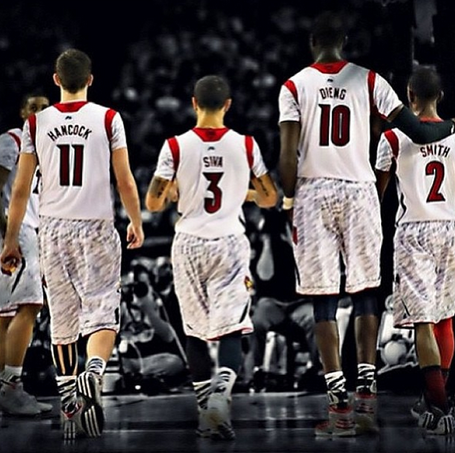 No, man, I've just been rubbing my eyes where this snake jumped up and bit me. Yeah, it was crazy. Ok, I was crying. The snake thing happened, though.

Perhaps the biggest story to come out of the New York Jets' camp this summer has been the rise of former adopted Card Chronicle son, Bilal Powell.

"When Terrell Davis got to the Denver Broncos, he was ninth on the depth chart," Lynn explained. "He just kept showing up every day and doing his job. A couple people got hurt here; someone got kicked off there; (Davis) made a couple plays here - and by opening week he was the starter. I was there and witnessed it all. That's how he got his shot."

Through practices leading up to the Jets' preseason opener tonight in Detroit against the Lions, Bilal Powell's training camp has not been unlike Davis' in 1995.

With the running back pool whittled by injury and absence, Powell has risen to become an essential component of the Jets offense and a leader in the locker room. Each day, Powell has turned in a 9-to-5 shift at the head of the line, and put in some overtime, as well.

Bilal gets his first chance to show out tonight in the Jets' preseason debut against Detroit.

And finally, your Friday treat of the day (once again courtesy of Internet hero upfromtheashes) is the full video of Louisville's 1993 demolition of Texas at Old Cardinal Stadium.

True fact: In their all-time series, U of L has outscored Texas 57-40. I'm pretty sure that doesn't factor into this year's BCS formula, but there's a chance I'm wrong on that.