Michael Jaylen and MaKinsley Renee were happy with the little taste of football they got, but were by no means fully satisfied.

We haven't had the opportunity to tackle the news yet (football reference), but Charlie Strong landed his 25th commitment from the 2014 class on Wednesday when Lakeland, Fla. DT Chris Nelson chose to become a Card. The three-star prospect was originally committed to Virginia, but wound up picking Louisville over the Cavaliers, Nebraska, NC State, Iowa and Kentucky, among others.

As a bit of a follow-up to Vance Bedford's plea, discounted single-game tickets are currently available for a limited time only. 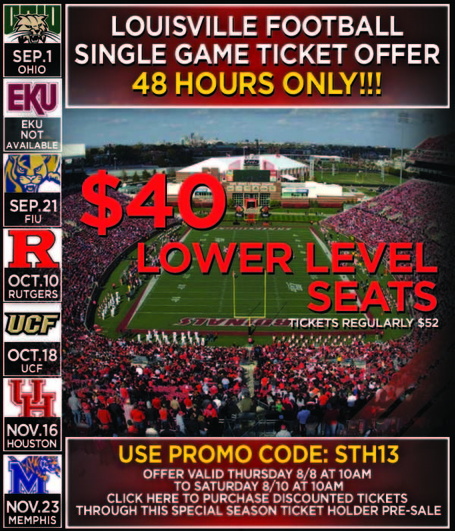 Also, all season tickets will be mailed on Aug. 12. Start guarding your mailbox with appropriate vigilance.

He was also right about Peyton Siva...and why he's so hood.

Rick Bozich and Eric Crawford have a Q&A with Charlie Strong that demands your attention.

BOZICH: Are you hard on your assistant coaches?

STRONG: I try not to be, but they're hard on themselves. But I always look at it like this, if we're not coaching fundamentals and technique, then we have no chance. Because the scheme is fine. I say, let me tell you fellas, everybody's got a scheme. Schemes don't bother me. Whatever. If you have good players, you'll have a good scheme. But you've got to coach those guys, and you've got to coach them on fundamentals, and you've got to coach them on proper technique. You've seen a lot of good football teams lose games because they were poorly coached. And I don't want anybody ever to say that about us -- that's a good football team but they're poorly coached. That could very easily happen to us this year. This season, I think about USC last year. Barkley -- Teddy. They had a transfer running back in from Penn State, we just had a running back transfer in. Wide receiver? They had them all. Think about those wide receivers they had. We got the same wide receivers. Defensively? They had a good defense. And look what happened to them.

BOZICH: You said that to your players or coaches?

STRONG: I'm going to talk about it with our players, but I said it to our coaches today.

BOZICH: Yeah, they didn't even finish in the top 25 and Barkley didn't go in the first round.

STRONG: And they started No. 1. And they didn't even finish in the top 25. That could be us. You look at it, if we allow that to happen, that will be us. Let's not become the USC of this season.

CRAWFORD: I want to ask about Clint Hurtt. None of us knows what will happen to him, and he has this past with Miami, but everyone here, coaches and players love him. What do you see happening, and do you think you can hold onto him?

STRONG: Well I want to hold onto him. What happened is he sat down with Tom and I and he told us the whole story, and we believed what he told us. I told Tom, the whole time he's been here, we've had no issues. He's a great recruiter, he's a great family man, and our players absolutely love him. I told Tom I wanted to do everything possible to back him. Even when he took a leave of absence, I said I'm not going to hire anyone, I'll coach the defensive front myself, I just want to make sure that he gets a chance to go before the committee of infractions and state his case, and he did a great job. So now we just wait on a final ruling.

Ain't no party like a Kevin Harned dance party.

On a related note, this might be the greatest piece of Louisville basketball memorabilia in existence. 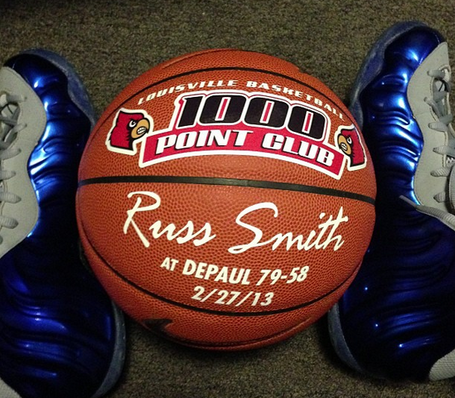 I already miss DePaul Day more than I miss three weeknight drinks not leaving me hungover for two days.

I was never the biggest Scotty Smalls fan anyway. The kid's a square, Benny.

If you're interested in owning the best moments from the Year of the Cardinal forever, our man Kayoss still has some great deals on Blu Rays of the national championship game, the Sugar Bowl and more.

CBS previews the AAC and believes that the league title will come down to the final game of the regular season.

Bold conference prediction: Cincinnati will be undefeated in league play when they host Louisville on Dec. 5. This is absolutely a bold prediction, particularly with back-to-back road games at Rutgers and Houston in November, but it is also the best-case scenario for the league. Last year the Thursday night finale between Rutgers and Louisville lacked some its luster due to late season losses for both teams. If both teams are undefeated in league play, the game will get much more national hype.

1. Louisville: The goal is simple for the Cardinals: return to a BCS bowl game. The American Athletic Conference still has the Big East's automatic bid to the BCS for this last year before the College Football Playoff takes over as the postseason format. With 16 returning starters, including Big East Offensive Player of the Year Teddy Bridgewater, there is no consolation prize for a team coming off 11 wins and a Sugar Bowl victory.

Some news on a pair of beloved former Cards, as Preston Knowles has signed a contract to play for Ness Ziona in Israel's top professional league, while Larry O'Bannon has signed with Sharks Antibes in France's top-level league.

Remember to keep voting for Mario Urrutia and Tiger Jones.

Led by U of L commit Reggie Bonnafon, the Trinity football team is the No. 2 team in the country in USA Today's preseason poll. Over at Rivals.com, however, the Shamrocks check in at No. 45, five spots behind arch-rival St. Xavier. The Tigers are expected to be quarterbacked by BJ Nagle, the son of former Cardinal great Browning Nagle.

Elite 2014 recruit Myles Turner has trimmed his list of schools to eight, and includes both Louisville and Kentucky.

Though Kentucky fans were quick to paint it as Teddy Bridgewater selling drugs to babies, U of L was equally quick to dismiss any notion that Bridgewater was involved in any wrongdoing in relation to items with his autograph appearing on ebay. Here's the school's official statement:

"We are aware of many of the items for sale online that have been autographed by several of our student-athletes with remaining eligibility. As we are required to do by NCAA rules, we regularly review these items and send correspondence to the seller(s) requesting they remove the item for sale.

We have and continue to educate our student-athletes that it is not permissible to accept any type of compensation for their autograph or the sale of memorabilia. We have spoken with Teddy Bridgewater and we are comfortable that no violation has occurred."

Rival fans tend to get a little desperate when they have a feeling they're about to get stomped.

The legend of the U of L AFROS is alive and well.

If you missed it earlier, Rob Yoder has some good footage of yesterday's practice, including some solid Michael Dyer clips at the very end.

And finally, I'm back on the radio with Mark Ennis tonight on ESPN 680 from 6-8. Listen live or anytime on ESPNLouisville.com.