U of L SID Rocco Gasparro tweeted that the number of people who attended Tuesday night's open practice was 1,600. There's no way to check the validity of that number, but I will say that there is no question that this was the most heavily-attended open practice in the history of Cardinal football.

The players are there, the hype is there and the fans are there. Perhaps the collision course ball began rolling on Wednesday.

All eyes were on Michael Dyer, who could justifiably compete with Doug Martin for the rightful owner of the "Muscle Hamster" nickname. The guy is like a tiny ball of pure strength.

Dyer ran with the third team - he was the fifth running back getting reps - and wasn't asked to do very much, presumably because he hasn't had time to learn any of the playbook. Whenever he was in, the play was a simple handoff.

The sample size was obviously too small to answer any of the "how in shape/how game ready is he" questions, but he certainly passed the eyeball test. 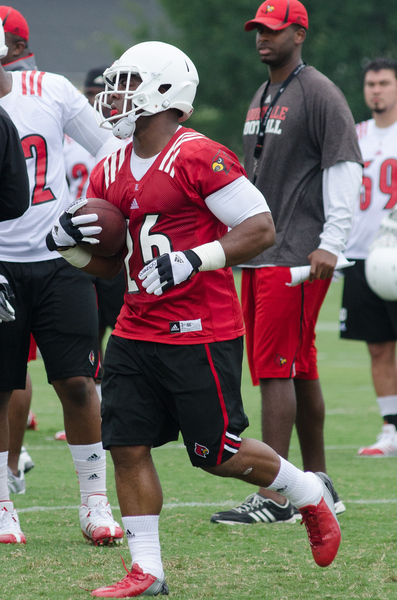 In other news, Chane Behanan has competition for the title of "Biggest Calves on Campus." Big man on calvemus? No? No idea why I felt the need to take it there. My apologies to everyone who had to go through that because of my selfishness.

As has been widely reported, Clint Hurtt was back on the field and just as active and vocal as always with the defensive line.

Will Gardner is your backup quarterback at the moment, and after looking a little shaky in the first quarter of practice, he really settled down and threw some crisp balls during 7-on-7. At one point he fired a laser over the middle to Eli Rogers, which was probably the best pass of the day thrown by anyone.

Kyle Bolin was playing with a brace on the left knee (he tore his ACL last fall), but appeared to be moving around just fine. He threw a handful of nice passes, the majority of which went in the direction of James Quick. The plan is still to redshirt the Lexington Catholic product, but if the unthinkable were to happen and Bridgewater and Gardner were to both go down, my guess is that Bolin would take over as Louisville's starting quarterback.

There were lots of problems with the under-center exchanges when the second and third teams came on the field. Gardner, Bolin and Brett Nelson all had problems when either Mike Romano or Tobijah Hughley were doing the snapping. Even when they got the snap, they didn't get it clean, it was almost like they had to double clutch it.

There were also plenty of issues on the quarterback to running back exchange. All stuff that will be worked out over the next few weeks.

--Keith Brown was not out there. James Burgess, Preston Brown and George Durant are your starting linebackers at the moment.

--Michaelee Harris was on the sidelines and had a noticeable limp.

--Senorise Perry was out there and did look healthy when he carried the ball. Stong talked recently about limiting Perry's reps in practice, which was the case on Tuesday.

--Andrew Johnson saw limited action because of an unspecified injury.

--Jamaine Brooks was dressed and saw the field.

--DeAngelo Brown is also hurt, which resulted in true freshman De'Asian Richardson running with the second team at defensive end.

They had a rap music mix playing the entire practice, except spliced into the middle of songs were live calls of plays, derogatory comments from announcers, etc. It was pretty fantastic.

This was an actual sequence on the soundtrack:

The lack of pads really makes Jamon Brown's size stand out. It was my initial thought pretty much every time the first team offense broke the huddle. It's so staggering that it keeps surprising you. The man is large.

Also very large? Gerald Christian. The 2013 holder of the legendary No. 18 jersey was running with the second team at tight end. As the depth chart indicates, Ryan Hubbell is your current starter at the position.

Something the depth chart doesn't indicate is that B.J. Butler is currently the team's starting fullback. Tyler Sharp ran with the second team.

It's hard to believe we've gotten this far without talking about Teddy, but Teddy was Teddy. Quarterbacks don't really have a chance to "put on a show" during a practice like this; the drills are more about getting timing down and making correct reads, both of which Teddy accomplished with ease.

The most fascinating thing about watching Teddy was juxtaposing it with what we saw just two short years ago. In 24 months, he's gone from a kid with unreal talent who looked a little lost and confused, to the unquestioned leader of the team, the guy who serves as the example for everyone watching - both on the sidelines and on the field.

I could have spent the entire practice watching Vance Bedford. His player interactions, his attire and his dance moves all demanded constant attention.

Presumably because of the injury to Keith Brown, Nick Dawson has (perhaps temporarily) moved back to linebacker.

Strong was really riding James Burgess on multiple occasions, at one point getting right up in his face. Third only to not possessing the necessary size or athleticism, being able to handle a situation like this is one of the biggest reasons I could never play football for Louisville.

If Charlie Strong gets in my face and expresses disappointment, I'm walking straight off the field and going to sit on the railroad tracks.

It wasn't a great day for Brandon Radcliff, who dropped a pass and looked a little bit lost at times. It was disappointing after he looked so impressive in the spring game, but it was also just one practice.

If you didn't know already, James Quick is going to see the field from day one. He dropped a pass late in the practice and he needs to bulk up a little bit, but the young man's natural skill set is off the charts. He will make more than a few big plays for this team as a true freshman. As long as he stays healthy, that's a guarantee. 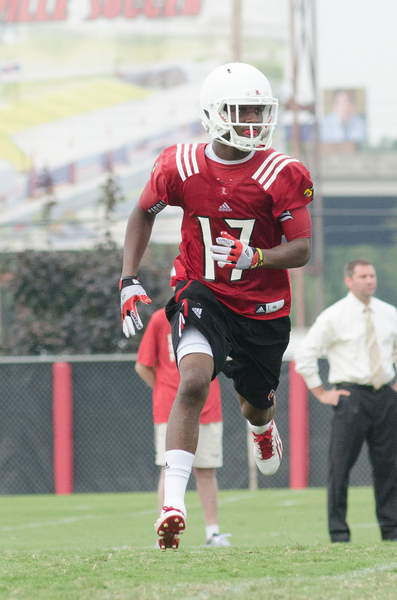 Charles Gaines might be the most vocal player on the team. Whether it's with the coaches, his fellow corners or the receivers he's lining up against, he is constantly talking. He backed it up for the most part on Tuesday, making a nice interception on a pass that should have been caught by Damian Copeland. That speed we saw at the beginning of last season is also still there.

Zeke Pike and James Hearns win the award for first fight of fall camp. Hearns, who had to be warned on more than one occasion that this was not a full contact practice, was doing most of the fist-throwing.

All it took was a monster ass-slapping to Charlie Strong for Jamon Brown to rocket up my list of favorite players.

It's remarkable how much bigger DeVante Parker has gotten in just two years. He was also wearing a pretty sick personalized white sleeve on his left arm.

Kai De La Cruz, Parker, Rogers and Robert Clark were the guys fielding punts on day one. Also, the punting was extremely hit or miss.

The best coverage on a single play that I saw surprisingly came from Devontre Parnell. He stayed right with Parker on a deep route in an island situation and gave Teddy Bridgewater nowhere to drop the ball in.

B.J. Dubose was back on the field and is a massive human being.

The single best catch of the day goes to Gerod Holliman, who went way up to make a one-handed catch with his right hand during a defensive back drill. Anyone who has read this site for a couple of years knows how excited I am to finally see Gerod on the field. 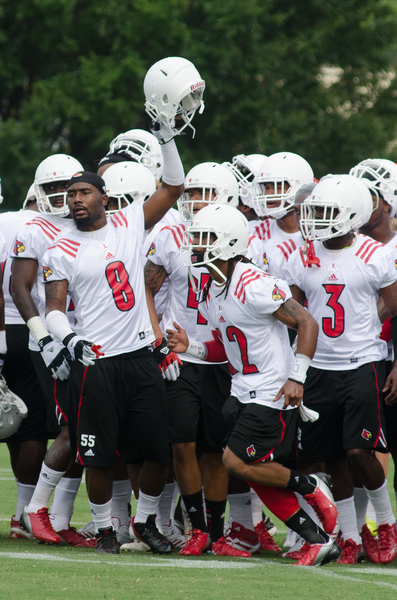 He also has the best chin hair on the team, and it's not even close.

As expected, Jake Smith is your starting center to begin camp.

Individual assessments aside, the major takeaway from the practice was that it was a "look how far we've come" experience.

I was at the first Charlie Strong era practice at 5:30 in the morning three years ago, and it could not have looked more different than what we're seeing now. The guys were smaller, they were way more confused, and they may as well have been playing under water when you compare the pace of that practice to the one yesterday.

Three years ago, Louisville practiced like a team that had no idea what winning felt like. On Tuesday, they practiced like one deserving of a top 10 preseason ranking.