Big shoutout to my man Grayson Hinz, who turned his recent broken leg into a positive by donning a red and black cast to support the Cards this weekend. Well played, sir.

Weather check: High of 90, low of 70 with a chance of isolated thunderstorms. Chance of rain: 30%.

You have no idea how happy it makes me to be able to type those out again.

In somewhat of a follow-up, U of L is allowing fans to bring 16oz unopened bottles of water into Sunday's game because of the high temperatures.

Rick Pitino thinks the NCAA's treatment of Rakeem Buckles is as ridiculous as you do.

"I'm just blown away by it. It makes no sense. It's amazing the NCAA can do this," Pitino told ESPN.com. "He's a model student-athlete who had a 3.2 GPA when he left Louisville. He just wants a chance to play in another NCAA tournament."

FIU was hit with a postseason ban by the NCAA months ago from academic deficiencies dating back to the Isiah Thomas regime.

"[Buckles] had no idea that the program wouldn't be able to play in the NCAA tournament when he transferred to FIU," Rick Pitino said. "This is a good kid who has dealt with plenty of adversity over his career. It's completely unfair."

Due to a "design issue," the Louisville football posters that were supposed to be available across the city on Tuesday will now not be out until "later this week."

The Wall Street Journal's "College Football Grid of Shame" measures how good all 125 college football teams are on the field as well as how embarrassing their off-the-field antics are.

Louisville falls under both the "powerhouse" and "admirable" umbrellas, while another in-state program is both "embarrassing" and a "weakling," something only four other BCS conference teams can say. 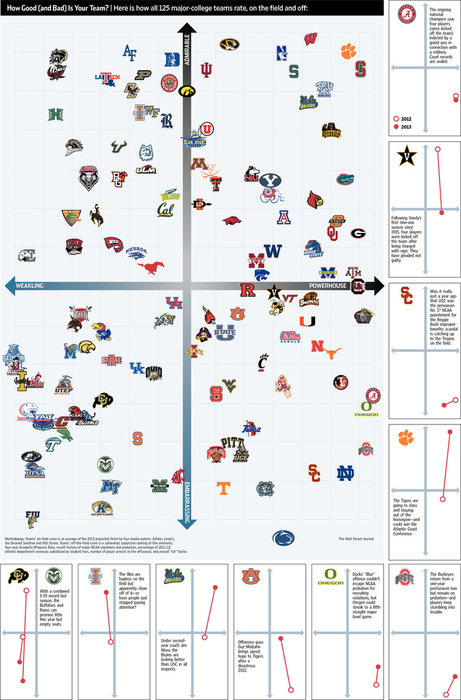 The release from the Auburn side about the 2015 Kickoff Classic has some complimentary quotes about U of L.

"Louisville and Auburn represent two great football brands with incredible fan bases and a tradition of winning," said Gary Stokan, Chick-fil-A Bowl president and CEO. "The ACC vs. SEC is a tremendous rivalry that has proven to be a recipe for sellouts, high TV ratings and close, competitive games."

Auburn Athletics Director Jay Jacobs called the game "one of the best neutral-site games in the country."

"A match-up with an outstanding program like Louisville will give us a challenging contest to start the 2015 season," Jacobs said. ""With more than 20,000 Auburn alumni in the Atlanta region, it will be a great way to kick off the college football season for Auburn University."

The Louisville/Auburn game got me thinking about the post we ran last year concerning Lee Corso's letters to Auburn in 1972. It was an interesting read then that just became a little bit more interesting today.

The Louisville/Ohio game might be sold out, but you can still win a pair of tickets by filling out this survey from U of L Magazine.

It appears five-star big man Trey Lyles' weekend visit will not extend to the game on Sunday.

According to Jason Anderson of ESPN 680, there will be 18 scouts representing 17 different NFL teams in attendance for the game on Sunday. They're all going to be so disappointed when they realize Titus Teague isn't suiting up this year. 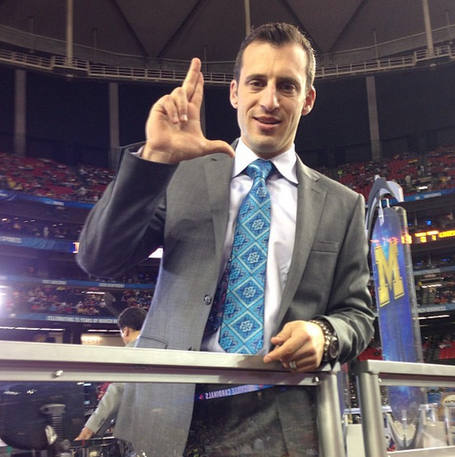 You don't deserve to have those three fingers.

I love Peyton, but I will never let "Fat Wayne" die.

Nice to see our man Crum's Revenge getting some much-deserved recognition from the local newspaper of note.

Rick Bozich says that Howard Schnellenberger's lack of inclusion in the College Football Hall of Fame is ridiculous.

Teddy Bridgewater (No. 2) and Hakeem Smith (No. 38)  appear on Andy Staples' (Sports Illustrated) first list of the top 50 prospects for the 2014 NFL Draft.

A handy, quick-and-easy preview capsule on Sunday's game from the AP.

Three more days until the pants come all the way off: 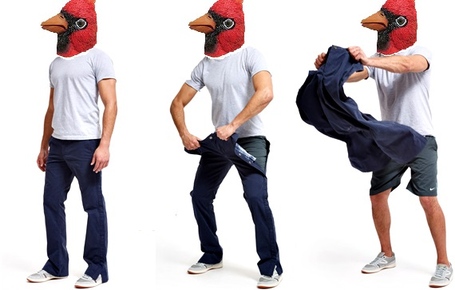 The Louisville women's basketball team will play 23 games on television this season, including eight on the ESPN family of networks. You can check out their full 2013-14 schedule right here.

The folks at WDRB offer up their fearless college football predictions for 2013, and only Eric Crawford sees Louisville running the table.

After immaturity essentially cost him his sophomore season, the light is clicking for B.J. Dubose, who could wind up starting on Sunday if Lorenzo Mauldin isn't able to go.

Congratulations to C.L. Brown, who is leaving his U of L beat writer position at The Courier-Journal to blog about North Carolina sports for ESPN.com. No word on who Brown's replacement at the C-J will be, but my guess is the Alabama fan who wrote the previously-linked post is a long-shot.

I wasn't really sure what I was supposed to be doing here, so I definitely did not match the intensity brought by Vanetti or Lefkoe.

Lefkoe's the guy at the Karaoke Christmas party who flawlessly raps "Bombs Over Baghdad" right after setting you up to fail with something from Greece. Dick.

Your complete guide to the legal stream for every single college football game available for online viewing is here. Bookmark it.

It's my site, I can share this if I want to. 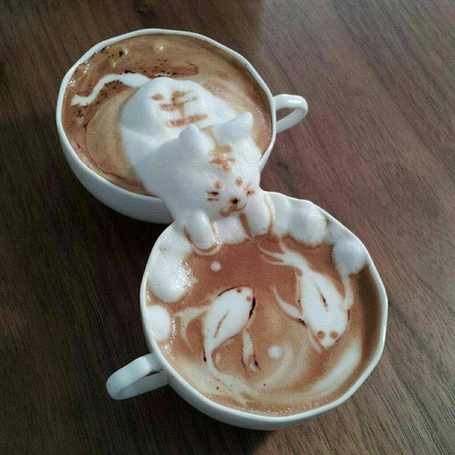 It's cool, but those first few sips would be awfully awkward.

Deadspin has Louisville at No. 12 to start the season, but its awesome graphic ranking every team with logos from 1 to 125 kind of makes up for it.

The Ohio beat writer for The Athens Messenger breaks down the Bobcats linebackers and defensive line.

Athlon says that Louisville has the 18th-best secondary in the country.

Lost Lettermen makes the case for Michael Dyer at Louisville.

Teddy Bridgewater rushed for 26 yards last season, so what possible justification could ESPN have for including him in this graphic (h/t: Howie Lindsey)? 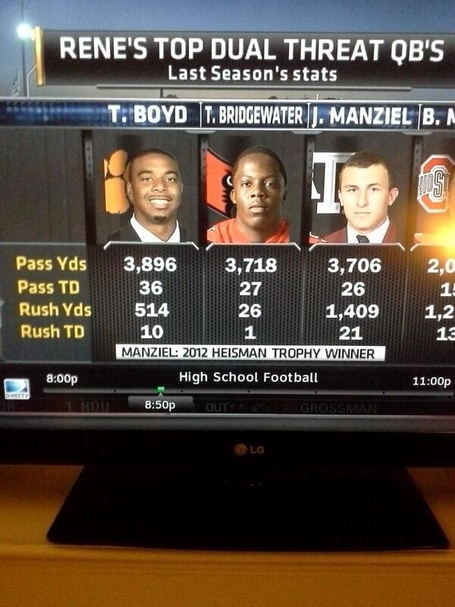 I also love hearing national pundits talking about Bridgewater and saying "he's actually not that much of a runner" or "the thing people don't know about Teddy is that he really doesn't like to run that much" as if it's some earth-shattering revelation. It's just like that time Mike Marra was included in College GameDay's "people we're surprised are able to dunk" segment.

The AAC announced on Twitter tonight that has reached an agreement with the Armed Forces Network, which will allow troops worldwide to see select games. That's pretty cool.

The season hasn't even started yet, but this is already the definitive Kentucky football read for 2013.

THE Kevin Harned is all ready for the CCBM March to the March: 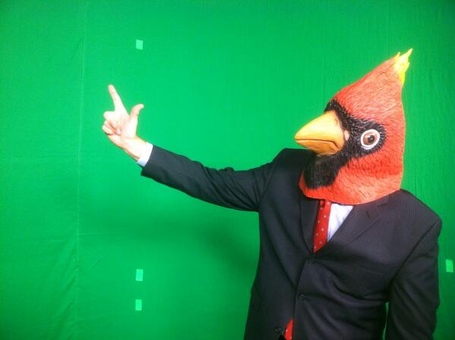 Maybe the best CCBM picture ever.

If you have the time, Spencer Hall's "The Business of Protection" is the one college football-related piece of writing you should read tonight.

Admission: I woke up a few mornings ago from a frustration dream in which I was having trouble sending a tweet. Louisville was in a struggle with Ohio, leading just 29-24 before a dazzling 11-yard touchdown sprint from Teddy Bridgewater put the game away.

Apparently I just had to get that tweet out there, but it wouldn't send. Then when it finally did go through, it had some weird characters included, which just made the situation worse.

I woke up and I've never been more sad about the things that my subconscious has deemed important...or creative.

By the way, it's not a coincidence that I picked 36-24 as the final score for the Ohio game in my post earlier today.

SB Nation's Jason Kirk lists Louisville as the most overrated team from the non-power conferences, but then turns around and sort of defends the Cards.

Most overrated: Esteemed colleague Bill Connelly has talked all summer long about how Louisville's (No. 9 in AP and Coaches) getting a 2012 West Virginia bump. You know, the confidence excess that comes with surprise-dominating a BCS bowl.

Cardinals fans justifiably point out that if we're going to discount the Sugar Bowl win over Florida, we should also discount unimpressive games against UConn, FIU, Southern Miss, and Syracuse. And we should remember that Teddy Bridgewater was injured for two of those. And Hattiesburg was monsoony.

The Bridgewater offense will overwhelm, an iffy defense with scads of returning starters will improve, and last year's wretched special teams will be fortified by improved recruiting. But though the talk of the offseason has been how weak Louisville's schedule is, it won't be a worry in December. There's no sign this is the year Louisville makes its leap from good to Boise State-esque, in terms of dependably flattening mid-majors.

Yahoo serves up its 2013 AAC preview.

The Schimmel sisters, who have become "national ambassadors for Indian Country," will pay a visit to the youth at the Red Lake Reservation on Sept. 21.

This is the part of News and Notes where I again call on you for help.

Every year in our morning "Game Day" posts we have a "(Insert Player Name) Playing Alert Level" for a guy we love who may or may not see the field. It started out with Bilal Powell because I thought he needed to be playing more (vindicated), and then moved to Zack Stoudt and Titus Teague because they were sporting the No. 18 Art Carmody jersey that I also owned.

Now Titus is gone, and the new owner of Carmody's legacy (Gerald Christian) will see the field without question. My initial inclination is to pass the torch to Gerod Holliman, but I feel like I may be overlooking someone more deserving.

Any and all suggestions are appreciated.