Someone just told Liam about all the cool ish that happened right before he entered this world. He's pretending like he didn't hear them.

Other players of note include:

Somebody wasn't too happy with his run to the LCPT Championship Game.

Kirk Herbstreit is picking Teddy Bridgewater to win the Heisman.

SB Nation college football sage Bill Connelly isn't as enamored with Louisville as the rest of the country, but he does a much better job of defending why than the vast majority of detractors have.

It's an ESPN insider story, but Jeff Goodman polled a number of coaches to get their opinion on which one of their peers was the best X's and O's guy in the game, and Rick Pitino checked in at No. 3. Michigan State's Tom Izzo claimed the top spot.

Teddy Bridgewater is only the 9th-most likely player to win the Heisman Trophy, at least according to College Football News.

9. QB Teddy Bridgewater, Jr. Louisville
The odds-on favorite to be the top quarterback taken in the 2014 NFL Draft - he's nuts if he doesn't come out early - he's coming off a fantastic season throwing for 3,718 yards with 27 touchdowns and a spread-out eight picks. Most importantly, he was one of the signature stars of the 2012-2013 bowl season with his 266-yard, two score day in the Sugar Bowl win over Florida. Everything is set up perfectly for a Heisman run with the talent, the experience, the team and the street cred after proving himself worthy against a top SEC team. The schedule is there for a huge season for the team and a bright spotlight for No. 5, but ...

Why He Won't Win It: The schedule. Where's the signature moment going to come from? If he blows up Rutgers, will anyone do anything more than yawn? Will destroying Kentucky, Connecticut or Cincinnati make anyone care? He has to put up astronomical numbers to reasonably get into the discussion, Louisville has to rip through everything in its path and there can't be an obvious other option. Getting to New York is possible, but actually winning the honor will take some serious breaks. 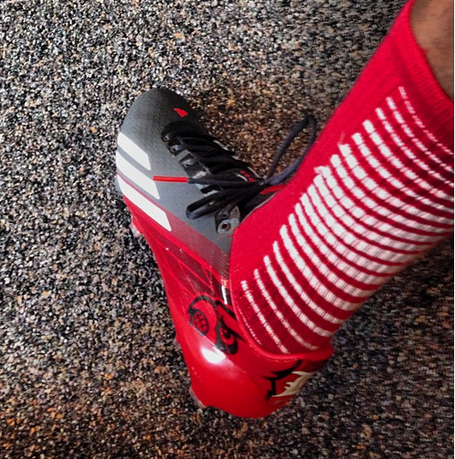 All seven of Charlie Strong's commitments from the state of Ohio are among the preseason Scout Ohio Top 150.

Howard Schnellenberger isn't thrilled with the move of the Louisville/Kentucky game to the end of the season.

Rick Pitino is about to be named the Louisvillian of the Year, but due to an unforeseen scheduling conflict, he won't be attending the ceremony being held in his honor.

USA Today is the latest to take a look at the possibility of the Kentucky basketball team going undefeated this season, and says Louisville is one of the five teams with the best chance to take the Wildcats down.

Dec. 28 - Louisville at Kentucky (4 p.m., CBS): This one needs very little explanation. Two schools separated by about 80 miles. Two rabid fan bases. The two coaches that won the last two national championships. Coming off their title, Rick Pitino's Cardinals lost a few key players but still might not miss a beat this season, thanks to the return of Russ Smith, Chane Behanan, Wayne Blackshear and Luke Hancock -- and the development of Montrezl Harrell. Expect Rupp to go more than a little nuts for this one.

As a bit of a follow-up, Rob Dauster wonders aloud where all this talk of a UK undefeated season is coming from. 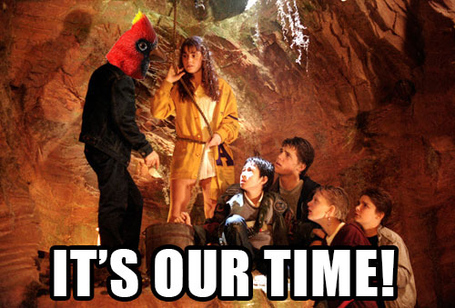 Sans Swift ("Trouble" over "Never" any day of the week), the three seeds are absolutely loaded in Grantland's Battle for the Song of the Millenium.

What if Sports' 2013 college football simulation has Louisville losing three conference games, and still tying with Cincinnati for the AAC title. This being the case, it's pretty disheartening that football games are played on computers. Guess it's time to start counting down the days until the Wesleyan exhibition.

Athlon says that Louisville has the seventh-best receiving corps in college football.

7. Louisville
Helping quarterback Teddy Bridgewater's Heisman campaign is the American Athletic Conference's best receiving corps. DeVante Parker averaged 18.6 yards per catch last season and has 16 touchdown catches over the last two years. Senior Damian Copeland led the Cardinals with 50 receptions in 2012, while Eli Rogers returns after grabbing 46 catches. This group will be even deeper in 2013, as Louisville is gaining the services of a couple of transfers - tight end Gerald Christian and receiver Robert Clark. Freshman James Quick is expected to play some snaps at receiver and will help on returns. -

Rival fans - the majority of whom don't know many yards a pass interference penalty is worth - like to take shots at Louisville for playing on Thursday nights, but the list of programs who have appeared in ESPN's feature weekday game the most is pretty impressive:

Congratulations to Louisville volleyball seniors Emily Juhl and Brooke Mattingly, who have been named the AAC's co-Preseason Players of the Year. 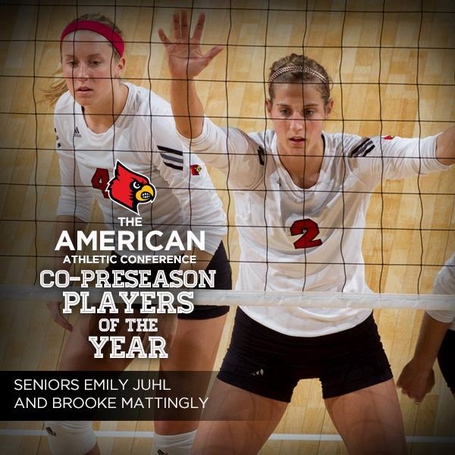 NFL.com says that Louisville is loaded with playmakers, but that DeVante Parker is the most explosive of all of them.

If you're looking for a short and quick preview on U of L's first opponent, here you be.

Yahoo previews the 2013 Cards, and says the offensive line is both the biggest and concern and the most important key to success.

KEYS TO SUCCESS: If the line can adequately replace its two best players from a year ago, C Mario Benavides and LT Alex Kupper, who is going to stop this offense? Bridgewater is a great decision-maker and has a terrific receiving corps at his disposal. DeVante Parker, Damian Copeland and Eli Rogers can get open against anyone, and freshman James Quick offers more speed. Adding Dyer to a running game that already boasts Senorise Perry and Dominique Brown is a case of the rich getting richer. The defensive line should generate a better pass rush this fall, and the secondary has physical players throughout the lineup.

AREAS OF CONCERN: Moving Jake Smith to center from guard fills one hole, but it means the line's right side will be inexperienced. G Kamran Joyer started a few games last year, but Abraham Garcia is raw. Can the D-line become tougher to block at the point of attack, enabling the Cardinals to stop the running game with consistency? Three of the defense's top four tacklers last year were defensive backs, and that should never happen for a good team. Louisville also needs more consistent play from its kick coverage units, which were simply dreadful at times in 2012.

The man affectionately known around these parts as Honey Mustard is looking to follow up his breakout season of 2012 with a stellar senior year. Copeland missed Sunday's open practice with a "dinged up" knee, but was back to full speed on Wednesday night.

Larry Vaught wonders how much moving the Louisville/Kentucky game will benefit the rivalry.

A quick reminder that if you don't have any Friday night plans, U of L QB commit Reggie Bonnafon and Trinity will be opening their season against Nashville Ensworth live on ESPNU starting at 7 p.m.

After that, I had a little camp in Louisville for a couple of days. It was T-Will's camp - Terrence Williams, from Seattle like me, the first one from Seattle who went to Louisville, who I've known since I was a kid - and we had fun there. Now I'm here in Detroit, working out, and I'll be here right until training camp starts.

Hearing the news that the Pistons had made the trade for Brandon Jennings and there was a roster spot for me was a great wedding present, absolutely. I was very excited about that. I found out on my honeymoon and I couldn't wait to get back on the court.

My wife's name is Patience, but I don't think she would have shown much patience with me if I tried to play basketball while we were on our honeymoon. I wasn't allowed to play, but there were no courts there anyway, so I was able to relax. But I missed it. It was killing me out there to not be able to play, but I picked up beach volleyball and water polo. It was awesome! I had a great time playing those. I also went zip-lining, too, which was also fun. We went on a tour around Puerto Vallarta and had a real good time.

(read while listening to "The Scientst")

More on Stites & Harbison's $2 million donation to U of L.

A story from a Kentucky fan website popped up in my Google News feed. Its headline contains 26 words. I felt like I had to mention it. Yes...had to.

USA Today writes that Bobby Petrino might be a changed man. Or he might not be. Or he could be partially changed. Or maybe he wasn't who we thought he was to begin with, making any recent change beyond the realm of our comprehension.

One of those four.