That would be Lance Lawfer spending some quality time last December spreading the good word at the Sydney Opera House in...Sydney.

Louisville's complete men's hoops schedule, including its AAC slate, will be released this afternoon at 3 p.m. Just as importantly, we're all about to find out the day that Chicken will finally be brought to The Bucket.

This is the brink of history.

USA Today has Louisville at No. 16 in its full countdown of all 125 teams in college football. The publication also doesn't see the Cards making it through their light schedule unscathed.

- In a nutshell: The gap between Louisville and the rest of the American Athletic Conference is immense, wider than the gap between any team and the rest of the pack in any automatic-qualifying conference. Obviously, anything less than a return to the BCS would be viewed as a tremendous disappointment - even if Strong and the Cardinals would never, ever suggest anything of the sort. There's simply no opponent in the American capable of beating UL, all things being equal; having said that, there's always the chance one team - Cincinnati, perhaps, or Rutgers and UCF - sneaks up and knocks the Cardinals off their perch.

I think someone does just that, in fact. I'm a little hesitant to plug Louisville as a title contender due to the idea that this team will not run the table, going 12-0 and earning a shot for the national title. Yes, the talent is there - oh, the talent is definitely there. The coaching is there, as is the confidence that comes with last year's finish. But I'm stuck: I think the world of Louisville, of Bridgewater and Strong, but I can't pull the trigger on an undefeated season. Would a Louisville team, playing this sort of a schedule, be considered one of the nation's 10 best teams if it suffers a loss? Maybe. But I'll say this: Should UL drop a game in the regular season, there will be many, many other teams with a stronger case for playing for the national title.

Let's enjoy the ride. UL gets one more season out of Bridgewater before he departs, likely as a high draft pick in 2014. Strong isn't going anywhere, most believe, so even without Bridgewater this program will head into the ACC with high expectations. And yes, I'd be foolish to not at least consider the possibility - a pretty strong possibility - that the Cardinals survive the regular season unscathed. For all its talent and confidence, I still think Louisville loses at least once before the postseason.

Linebacker/tight end/fullback Jalen Harrington has left Louisville, and plans to finish out his college career at Murray State.

In addition to Harrington, cornerback Jordan Paschal is another notable name no longer on the Cardinal roster. Paschal was named a starter opposite Anthony Conner before the 2011 season, but found it difficult to get on the field at the position over the past two years.

So apparently Russ is huge. 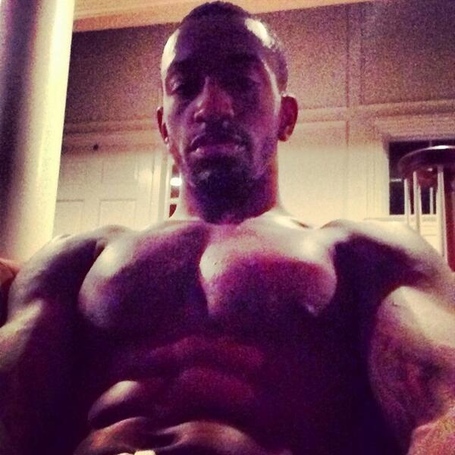 Or he's just really stepped his photoshop game up.

Good news from Business First, which says the Yum Center has posted a higher-than-expected profit under its new management.

Dennis Petrullo, the arena's general manager and an employee of Los Angeles-based AEG Facilities, said Monday that the Yum Center's profit for fiscal 2013, ended June 30, was $2,137,837, more than the $1.1 million originally projected. AEG took over management of the Yum Center from its previous operator, the Kentucky State Fair Board, last year. Petrullo discussed the arena's financial figures during this morning's monthly meeting of the Louisville Arena Authority Inc.

As part of its contract with the arena authority, AEG has guaranteed that the Yum Center will generate a profit of at least $1 million per year.

The arena generated $8.7 million in revenue and had operating expenses of $6.6 million.

A special thanks to Wes Napper and Brad Miller for hooking me up with the finest bottle of wine known to man. 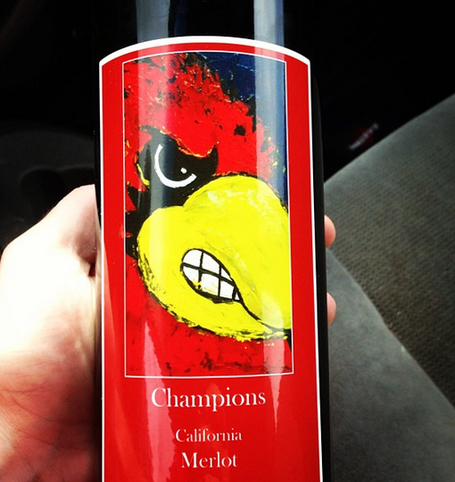 According to ChicagoHoops.com, Louisville is one of five schools that will be paid an official visit by five-star big man Cliff Alexander.

So what is Alexander up to this week?

That. Is. Hilarious, Cliff. This kid gets it. He's meant to be a Cardinal.

Someone who won't be taking a visit to Louisville is four-star big man Goodluck Okonoboh, who trimmed his list to Duke, Indiana, Ohio State, UNLV and Florida on Tuesday.

The good news is that Louisville appears to have emerged as the leader for another 2014 big man, Chinanu Onuaku. Onuaku's older brother, Arizne, played at Syracuse. Chinanu will visit U of L in a couple of weeks.

The cat had been out of the bag for a while, but Sunday's open practice confirmed that B.J. Butler has made the move from fullback to tight end. Butler was running with the first team at FB during the open practices at the start of fall camp, a position Tyler Sharp and Jarel McGriff-Culver are likely competing for now.

Yahoo examines the red flags among every BCS title contender, including Louisville.

It starts and ends with the schedule for the Cardinals, who could easily go undefeated and be left out of the BCS title game in lieu of a one-loss team from a more respected conference. (The bias will likely come less from the pollster and more from the computers, which will almost assuredly hate Charlie Strong's crew all season.) The single year of American purgatory isn't Louisville's fault, but the lack of a real non-conference threat really hurts their chances to impress outside of the league. This is also a team that lost to Syracuse and Connecticut last year, so despite the fact they don't play a team in the preseason top 35 (not a typo - thirty-five), it doesn't mean a potential toe-stubbing isn't there.

They return most of last year's 11-2 squad and add Michael Dyer to the backfield, but they'll have to fill two critical spots on the line after the departure of left tackle Alex Kupper and center Mario Benavides. The advanced metrics are also not huge fans of the Cardinals, but that's only because they've never seen Teddy Bridgewater throw an out route on the move. Why do you deny yourself joy, heartless machines?

Wednesday debate: Is Mark Wahlberg a great actor, or is he just a guy fortunate enough to play himself in a handful of great movies? I'm not going to tip my hand here, but I think Boogie Nights is the most important cog to either argument.

A UK fan from Breckenridge County was recently caught drugging women he met through a Christian dating website. His mugshot is hilarious. 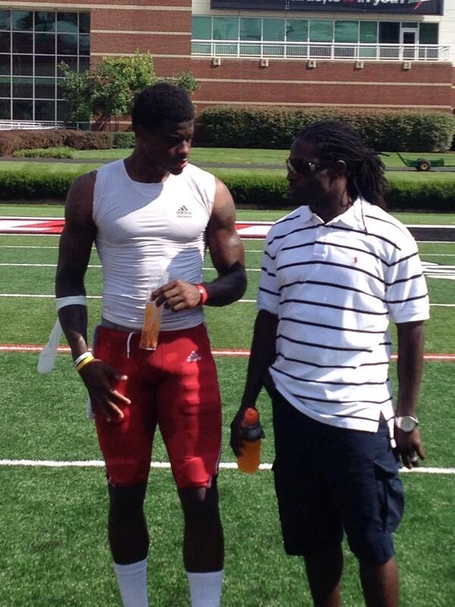 CBS Sports has announced a sub-licensing agreement through ESPN to broadcast AAC basketball games on CBS Sports Network this season. Five U of L games are included in the deal, although no specifics have been released about which ones they are.

The Cards check in at No. 8 on the LA Times' preseason top 25 countdown. The Times' story on U of L focuses on its starting quarterback, whose name I can't remember off the top of my head.

Four Louisville restaurants have been named to Southern Living's "100 places to eat now."

why did I just walk into a patients room who had the cardinal bird mask on. 😭😩😂😭😂😭😩

This is the dream.

Louisville football isn't the only team around these parts generating some preseason chatter about potentially going undefeated. The Sporting News examines five hurdles that could derail Kentucky basketball's illusions dreams of going 40-0.

3) Louisville is a known quantity now: The Cardinals will have to visit Rupp Arena on the afternoon of Dec. 28, but they'll arrive as reigning NCAA champions, with seven of their top nine players from the championship squad.

The team that went to Rupp in December 2011 became a Final Four squad, but only after finishing 10-8 in the Big East regular season. This Louisville team will be far more imposing.

It's an adorable feature.

U of L announced Tuesday that Charlie Strong's new radio show will debut August 29th on 84-WHAS and will run weekly throughout the season all the way up until December 3rd. The show will be hosted by Paul Rogers and will air at 7 p.m. every week from the Tumbleweed on the river.

Someone should probably tell Denzel Ware - the UK football commit who posted a private conversation between himself and U of L assistant Ron Dugans earlier this summer - to stop tweeting.

Promise is a heavy word, Denzel.

And finally, a year ago, we made Gorgui Dieng the overwhelming LEO Reader's Choice winner for "Best person to have their face on a building." Now, I think the time has come to pass the honor on to Teddy Bridgewater.

If you want to shoot me a vote for "best local hip-hop artist," I wouldn't hate that either. Also, Hot Hot for "best community role model."