AP Voters All Over The Place When It Comes To Louisville

Share All sharing options for: AP Voters All Over The Place When It Comes To Louisville

The release of the Associated Press Top 25 over the week ensured that for the first time in the history of the program, the Louisville Cardinals will begin a football season as a top 10 team in both major polls.

But that doesn't mean all AP voters are sold on the Cards.

Though U of L will begin the year ranked No. 9, 15 voters assigned the Cardinals a double-digit ranking on their ballot. Most notable among that group is Mitch Vingle of the Charleston (W. Va.) Gazette, who has Louisville at No. 21 - six spots lower than anyone else.

At the other end of the spectrum is Scott Wolf of the Los Angeles Daily News who has U of L at No. 2, behind only defending national champion Alabama. Three other voters have Louisville at No. 4.

Here's the complete rundown of who the AP voted on Louisville, via PollSpeak.com:

And for the visual learners among us... 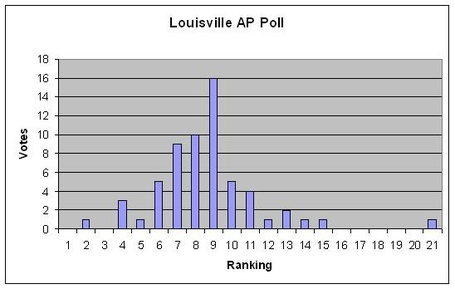 I've been a Scott Wolf fan ever since he worked at The Max.