Seven-week-old Parker Thompson didn't get to experience the Year of the Cardinal, but that doesn't mean he isn't going to celebrate it. 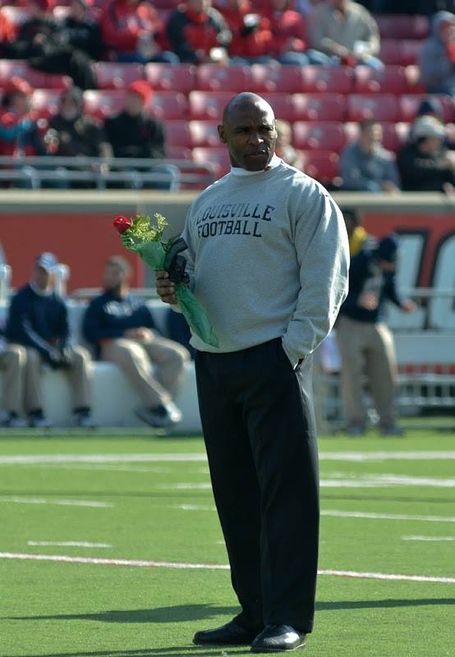 A tornado flew around my room before you came...

I talked a little bit about this on the radio both Monday and yesterday, but there are two aspects of the Michael Dyer addition that I don't think are getting as much play nationally and locally as they deserve.

First, even if he doesn't rush for 1,000 yards or even wind up being Louisville's No. 1 or No. 2 back, the addition of Dyer is huge in terms of national perception. As ridiculous as it is, perception trumps reality in college football, and U of L is still perceived as a "mid-major" program by the sport's old guard. The addition of Dyer - who broke records, won championships and was the Most Valuable Player of a national title game all at a traditional powerhouse - is huge for U of L's legitimacy in the eyes of these folks. It sounds crazy, but there's a possibility that the Cards will be in a position where they need a "bump" like this in a few months.

The second thing is that I think this really is more about Michael Dyer the person than anyone, including most Louisville fans, believe it is. Major college sports have become such a moral cesspool that we immediately roll our eyes at the notion of someone doing something for a talented athlete solely because it's the right thing to do. Let's not forget that Charlie Strong kept Darius Ashley on scholarship after his second DUI even though he never allowed him to play football again. He's also stuck his neck out for guys like Charles Gaines and Zeke Pike instead of simply casting them aside. Strong is from Arkansas and has a relationship with Dyer's high school coach as well as several other people in the area who vouched for the young man. This is deeper than a coach just taking a kid because he has next-level potential.

The most telling evidence here is the fact that Louisville doesn't need Michael Dyer. U of L already has four very good running backs and would still be the No. 9 team in the country had Dyer committed to South Florida or anywhere else last night.

Cynical as we all may be, sometimes, even in major college sports, people do things simply because they believe it's the right thing to do.

It doesn't really mean anything, but this is still pretty cool:

More bets placed on Louisville to win BCS than any other team at Wynn, sportsbook director tells @DavidPurdum

Help us. Beat somebody. Beat anybody.

If you have any interest in being in the Red V. Blue movie, here's your chance. This Sunday at 2 p.m., the film's producers are taking over St. Matthews and the cameras will be rolling. Great drink deals, signed Red V. Blue gear and former players will all be featured. Cards fans will be gathering at Molly Malone's (3900 Shelbyville Rd); Cats fans will be gathering at the Tin Roof (3921 Shelbyville Rd).

Jeff Goodman says (Insider) Rick Pitino is the fourth-hardest coach in the country to recruit against. Reigning SEC Tournament quarterfinalist John Calipari checks in at No. 1.

"It feels great to have the city back [and] excited for football season." --Damian Copeland

The Summer of Trez rolls on at the first day of the adidas Nations.

According to Steve Jones of The Courier-Journal, Quentin Snider has received 10 scholarship offers since decommitting from Louisville. Among the hottest in pursuit is Indiana, where Snider is already planning to visit. Neither Kentucky nor Louisville have reached out to Snider since the decommitment, and U of L has reportedly pulled its scholarship offer from Snider completely.

Not one member of Athlon's college football staff believes Louisville will finish this season undefeated, and all four believe the Cards will drop their regular season finale at Cincinnati. 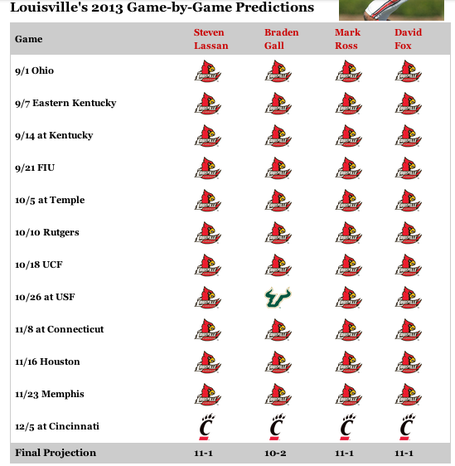 Former Kentucky point guard Michael Porter has been sentenced to two years in prison for having sexual relations with an underage girl at a church camp.

C.L. Brown examines U of L's preseason ranking and what it may mean for its national championship hopes.

The good news? Since the 2006 inception of the BCS title game, which matched the No. 1 and No. 2 teams in the BCS standings, only four teams ranked outside the top 10 in at least one of the two major preseason polls advanced to the championship game.

Auburn, which was ranked 22 in the 2010 preseason AP poll and 23 in the coaches poll, is the only team to win the BCS title game that wasn't a preseason top 10 team. Its opponent that season in the championship, Oregon, also came from the "outside." The Ducks were ranked 11th in both preseason polls.

Notre Dame wasn't ranked last year in the AP preseason poll and was No. 24 in the coaches' poll, but appeared in the title game, losing to Alabama.

Former Cardinal William Gay might be playing a larger than expected role for the Pittsburgh Steelers this season.

Dr. Fitz Hill said Charlie Strong is in the "people-building business" and "willing to invest in human capital."

Trinity quarterback Reggie Bonnafon has received his official offer from U of L: 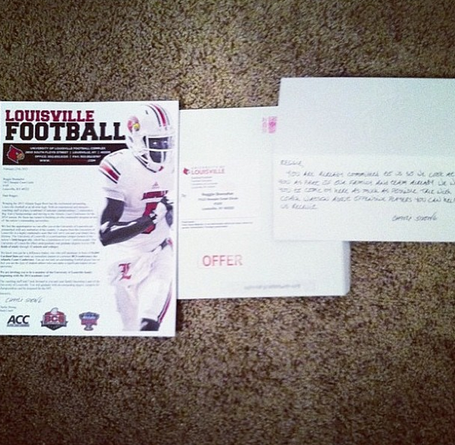 Love that they use Teddy on the letter.

"Detroit Jock City" says that the Brandon Jennings trade opens the door for Peyton Siva to stay with the Pistons.

When the intrastate football series was relaunched in 1994, U of L gained more from it than UK did.

The series helped Louisville get Papa John's Cardinal Stadium built. U of L's success against Kentucky (the Cards lead the modern rivalry 11-8) boosted the in-state perception of the Cardinals program.

Yet UK has always benefited from the Governor's Cup series, too.

A game with U of L has been UK's best-attended home contest in six of 11 seasons in which the Cards visited Lexington since the rivalry resumption in 1994.

Charlie Strong is putting his principles on the line with the addition of Michael Dyer, according to Eric Crawford.

The AAC is counting hard on Tommy Tuberville and the Cincinnati Bearcats. I'm telling you, if that Dec. 5 game is for the conference title, I'm going to be very, very paranoid about a fairly called game.

And finally, I can't let you go into the weekend without some Ted: