Pieces Of The 2013 Final Court To Be Signed By Rick Pitino, Sold To Louisville Fans

Share All sharing options for: Pieces Of The 2013 Final Court To Be Signed By Rick Pitino, Sold To Louisville Fans

Louisville fans will now see history every time they walk inside the KFC Yum Center, and will have a chance to own their own smaller piece of history starting this fall.

During a press conference Tuesday afternoon, it was announced that the center of the Final Four court from Louisville's national championship victory in Atlanta last April will be framed and hung in the lobby of the KFC Yum Center. The court will measure 24 x 28, will weigh over 6,000-pounds and will be held up by steel beams.

Basically, this thing is going to be enormous. 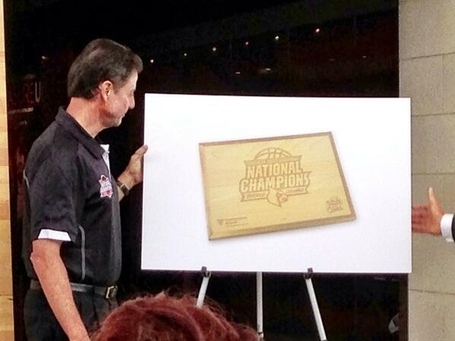 Further details on all of these matters will be made available in a few weeks.

Proceeds from all sales of the court and the autographed pieces will go directly to Kosair Children's Hospital and pediatric cancer research. U of L and Northwest Mutual have set a goal to raise $250,000 for Kosair.