Sunday Of The Cardinal: Basketball Cards Past, Present and Future Shine Literally (Literally) Across The World

From Vegas to Orlando to Prague to Russia, Sunday was a fun day for college basketball fans

Share All sharing options for: Sunday Of The Cardinal: Basketball Cards Past, Present and Future Shine Literally (Literally) Across The World

With the Greatest Year in College Sports History lasting into June with the College World Series and the NBA Draft, and the Year After The Greatest Year In College Sports History starting in August with football practice, the Interregnum promised to be mercifully short. Namely, July. We can make it through July. It's one month. Sure, it has the maximum number of days a month can have, but still, it's one month.

The way the day unfolded, with Luke in the morning and Trez in the afternoon on ESPN3.com, then Kyle's game and Siva's games back-to-back on NBA TV, then the Twitter reports from Las Vegas, then a replay of Luke's game on ESPNU....if you could explain to 2005 you how you were able to watch Louisville players dominate across the world, well, it would probably mostly be a conversation about the technology and space-time continuum difficulties with time travel and I overuse this device. But still, I appreciate modern technology. Thanks science!

Let's look at how each of our Cardinals, past, present, and future, did today:

One of the biggest stories of the offseason so far has been Trez going from "unheralded" to "consensus break-out player for the 2013-14 team" to "surefire lottery pick" with his strong showing for Team USA. He rose to the occasion in the Gold Medal Game of the U-19 FIBA Men's World Championship yesterday, dominating taller Serbian guys at both ends of the floor and ending up as the team's leading scorer with 17 points, 4 rebounds and 4 blocks. The stats don't fully capture how great Trez played in this game, how he affected shots on defense and how his man would sell out on blocking out on defensive rebounding. He also had a sick follow-up slam (1:26 mark of the complete highlight video below) to his own miss, but most importantly for Cards fans, showed off a mid-range, elbow free throw line jumper, which shall henceforth be known as a #jumperl. Adding L to words will never, ever get old I reckon (unless 2015 me comes back to tell me about that and how we have to watch recruits announce their decisions live on the Melgos app).

If you get a chance, watch the whole game because the announcer is awesome, keeps calling him Montrel (I guess the Z is silent since they are in Prague) and notes again and again how Montrel is changing the game. He says that Harrell lives in the 6 inches above the ground (but way more poetic) and in general was about 10X better than almost everybody on US TV except for Bilas, Raftery, McDonough.

Trez had the play of the game:

And a number of times appeared in the full highlights:

Finally, here's the man himself, with an Instagram message of "I'm blessed beyond belief." 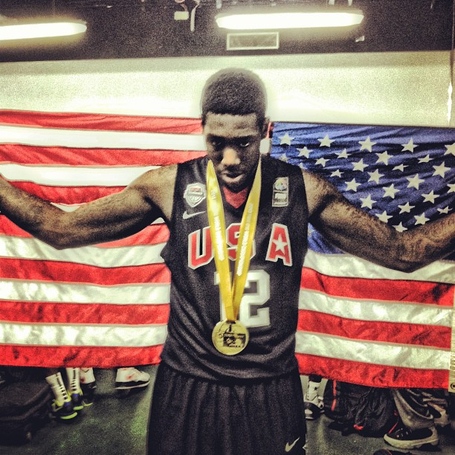 Lots to be excited about for the 2013-2014 Cardinals, but another (and likely last) season of Montrezl Harrell is towards the top of the list.

Another thing to be excited about next season? The Final 4 Most Outstanding Player from the defending National Championship College Basketball Team coming back for his senior season. Luke Hancock started for Team USA in the first round of the World University Games in Russia, and hit some 3s and helped the red, white and blue pull out a squeaker, 140-46 over United Arab Emirates. Hancock ended with 9 points, 2 assists and a steal on a December 2012-esque 3-8 from 3. But he only played 14 minutes because of the absolute beatdown being given and most of those misses were when they were already up like 30 and it was just like, whatever I'll just shoot. Not like, we are down 12 and I'm going to make 4 in a row and then a steal type situation. 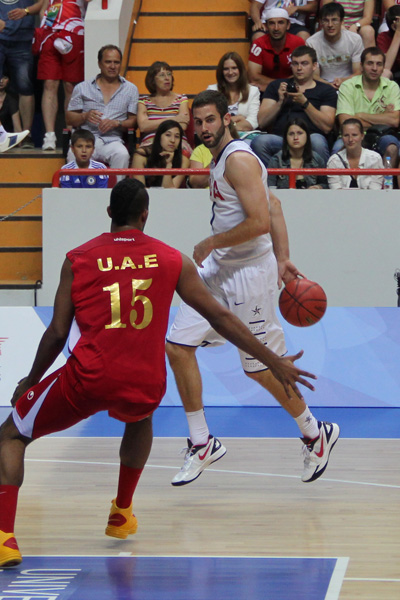 The viewing and cheering went from two current Cardinals to two former Cardinals as the NBA Summer League got under way in Orlando. The Oklahoma City Thunder have picked up one Kyle Kuric, who you may remember from such once-in-a-lifetime UofL experiences as "Last Game at Freedom Hall" and "and...yam!", to play on their squad along with their first round picks from last week's Draft and former Kentucky Wildcats Daniel Orton and Andre Liggins. Despite playing the fewest minutes of anyone on the team, Kuric scored the most points of all non-starters, going 2-3 from 3 and 2-2 from the line (8 points) to go along with a defensive rebound. Probably a longshot for him to make the main team, but any chance for him to showcase his skills against NBA players is a good thing, and he took advantage of the limited opportunity he was given.

More is expected, however, from Peyton Siva's time with the Detroit Pistons in the summer league if he is to get a spot on the roster. He is being given the opportunity: he started today along with Andre Drummond and first round picks Tony Mitchell and Kentavious Caldwell-Pope. While he didn't score a bucket from the field (he was 0-2 and didn't attempt a 3 pointer) he got to the line well (6-8), had 6 assists, 4 rebounds and 4 steals and would have had a bunch more assists if guys had made the open shots he set up for them. I didn't get to watch the game, but following on Twitter it appeared he was getting into the lane but was having trouble against the taller guys guarding the rim for the Nets.

With Jose Calderon signing with the Dallas Mavericks, Siva has a much better chance today of making the roster than he did on draft night. It sounds like the Pistons will give him a shot, and here's hoping he gets a full-time job because if there's anyone who deserves it, it's Peyton Siva.

I really don't want to get excited about recruiting, but the conventional wisdom is that there's a 1-year lag on recruiting following good, successful seasons on the court/field. Not surprising, then, that the 2014 recruiting class is shaping up to be the best incoming recruiting class in both Louisville football and basketball history, without any real room for debate. Sure, the Gorgui-Russ-Justice class was the most successful and loved in decades, and the 2011 class of Chane, Wayne and Ware will go down in Cardinal history, but if the 2014 class adds 2 of the like 10 top-50 big men we are recruiting to the guys who are already committed....ya, that's going to be a top-3 national class if not overall No. 1, and easily will be the most talented and highly rated incoming class in history.

While there is no video yet, surprisingly everyone who covers recruiting schlepped out to Las Vegas and tweeted about the happenings. Here are just a few examples:

Quentin Snider on a strong run. Dwayne Morgan continues to play well. W Myles Turner not playing, there is no one to guard Cliff Alexander

Corner 3 for Quentin Snider, then a gliding finger roll on the break. The second came on an assist from Charles Matthews. Their team up 10

JaQuan Lyle and Quentin Snider are on the same camp team, although they haven't been in the game together in the parts I've watched.

Quentin Snider with a hard coast-to-coast take with a really nice one-handed finish with a defender on his back.

No doubt it's good news for UofL that Cliff Alexander said he plans to visit there. Cards would seem like a strong fit for him.

Louisville commit Shaqquan Aaron officially has the hot hand. He's 4 of 5 from three so far.

"Rick Pitino is getting a good one in Q! Love his pick n roll ability to attack"

Louisville's 2014 PG commit Quentin Snider has quietly played well. Two threes, some transition layups and has mixed in a floater.

JaQuan Lyle with a ridiculous behind the back pass for a hockey assist to Justin Jackson. He also has a couple threes.

So there you have it. Nobody freak out. Nobody say anything.

Montrezl leads Team USA to gold, Luke starts for Team USA in Russia, Siva and Kuric make their NBA Summer League debuts and the top recruits in the country at the LeBron camp are all mentioning Louisville and being recruited by our 3 already-committed 5 stars. And we got to watch it all unfold on a random Sunday in July, through the magic of streaming video from across the world, Twitter and a network dedicated to the NBA.