Ken Moser is making all the right moves in Athens. Never back out of a scheduled game with us...this is what happens.

Expect a thrilling conclusion to Dyer Watch 2013 in the very near future.

Although Dom Brown might not be as on the edge of his seat as the rest of us.

Man everyone wants to hyped this guy up all I kno is my boys and I AINT GOT NO WORRIES man! and thats real talk @SenoriseP @BrandonRadcliff

There are only two major concerns with bringing Dyer into the fold, and disrupting chemistry is one of them. Although I think the pros of adding a player like Dyer - which include potentially elevating the performance of the other people at his position - still outweigh the cons.

There's no doubt that Brown is correct in thinking that even without Michael Dyer, Louisville is pretty loaded at the running back position.

Two of Louisville's greatest in one room: 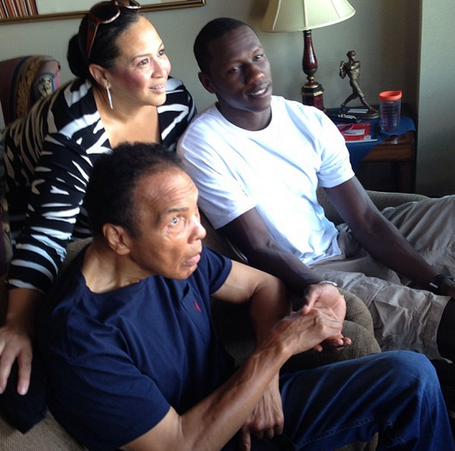 For those who have been asking, the preseason USA Today coaches' poll will be released on Thursday at noon. I know they've been ranked higher by a number of publications, but I'd still expect that Cards to wind up somewhere around No. 10.

Speaking of preseason polls, between 2008-2012, Louisville has been one of the most accurately ranked teams in all of college football. 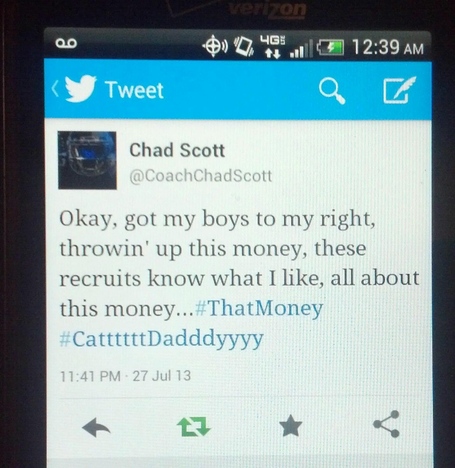 I can't imagine why.

The full preseason AAC media poll and all-conference teams will be released tomorrow during the league's media day, and Louisville is expected to be the near-unanimous No. 1 pick. Tampa Bay Times sports writer Greg Auman gave fans a sneak peak at his ballot for tomorrow, which has U of L at the top of the 10-team conference.

Athlon has released its full bowl projections for 2013, and the publication sees Louisville heading back to the Sugar Bowl to take on Georgia.

Teddy Bridgewater dropped an A.F.R.O.S. (America's Finest Receivers On Saturday) reference on ESPN today, which led to the unearthing of this absolute gem of a highlight video featuring LaVell Boyd and the original AFROS.

A major congrats to Peyton Siva on tying the knot over the weekend, and a respectful Rest In Peace to the hopes and dreams of many a Louisville female. The kid has had quite the 2013.

The Miami Dolphins have signed former Card Andrell "Pooda" Smith to a free agent contract. Pooda would seem like a long-shot to make the team, but the experience and added name-recognition are both major boons for his career. 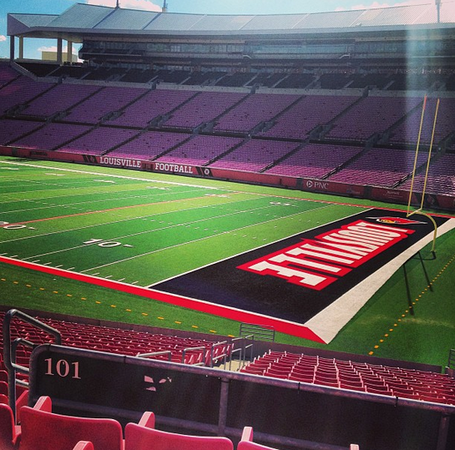 Dr. Holly Sheilley, another leaf off the Tom Jurich tree, has been named the first female athletic director at Transylvania.

Congrats to former Cardinal Monique Reid, who has been named the new head coach at Fern Creek High School, her alma mater. As a senior captain in 2012-13, Reid averaged 9.2 points and 3.9 rebounds, helping the Cardinals reach the national championship game.

Teddy Bridgewater has already taken the necessary steps to make sure he's covered should he suffer a Michael Bush-esque injury at some point this season.

Louisville junior quarterback Teddy Bridgewater said Monday that he has taken a $10 million insurance policy to protect himself against a career-ending injury.

Bridgewater is projected by many to be a top-five pick in next year's NFL draft. Last season, he attempted to play through several injuries, including to his ankle and thumb.

Bridgewater said he has a high tolerance for pain that came from watching his mother battle and overcome cancer.

"I saw my mom struggle to get out of bed," Bridgewater said. "I saw my mom's hair fall out. As far as I'm concerned, no pain is too tough to deal with."

My thoughts and prayers are with Cardinal fanatic Robbie Boarman and those closest to him. Here he his staying upbeat just moments before undergoing brain surgery earlier today: 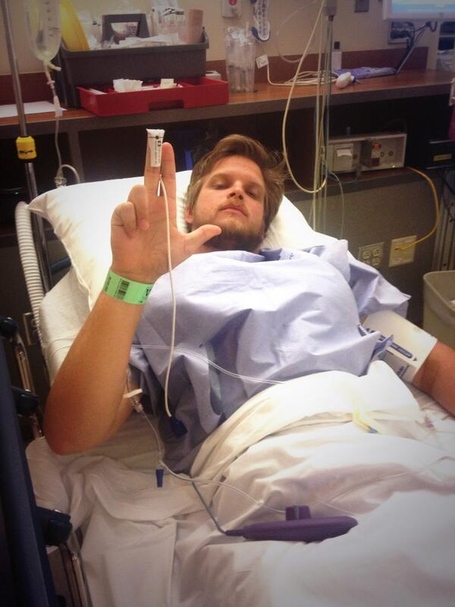 Randi Ewing, the daughter of Patrick Ewing, is ready to make a name for herself at U of L.

According to multiple reports, Rick Pitino and company have extended a scholarship offer in the direction of 2014 center Michael Humphrey from Phoenix.

Probably the most BBN thing ever:

Per Evan Daniels, class of 2014 standout Isaiah Whitehead has confirmed that he is no longer considering Louisville. The staff stopped targeting the young man following the commitment of JaQuan Lyle. 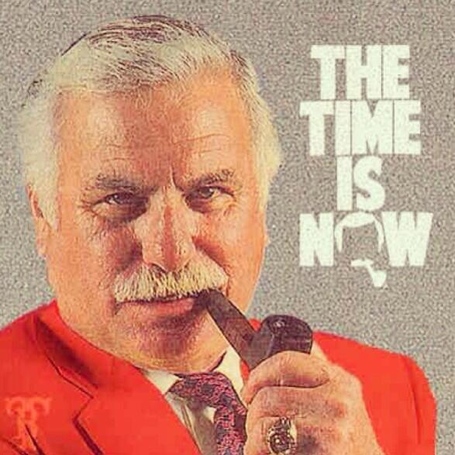 The U of L women's team is embracing the new rule changes for the upcoming season.

Louisville's Nov. 8 game at Connecticut will kickoff at 8:30 p.m. and be televised on ESPN2. The game will be part of a Friday night network doubleheader featuring the Huskies, as the UConn men's basketball team will be taking on Maryland at 6:30.

And finally, I'm back on the radio with Mark Ennis tonight from 6-8 on ESPN 680. Listen live or anytime on ESPNLouisville.com.