Desperate for any actual news, this was Jordan Raisor's reaction to Russ Smith's performance in Estonia this morning. 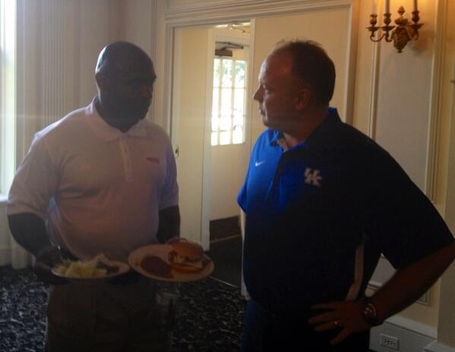 ...the biggest story form Wednesday's Governor's Cup Luncheon was the stability of the series itself and when the game should be played.

Though most coaches, even some at Kentucky, have admitted in recent years that they would prefer the game to be played on the opening weekend every season, Stoops sided with the UK administration's stance.

"We generally like to play them after we get a few games under our belt, so game two, game three, somewhere around there. I think with all the conference scheduling issues that are going on within the SEC, we may not have a lot of say in that."

'It's a long process'

As for the security of the series, UK AD Mitch Barnhart says it's safe for at least the next few years because the SEC won't be going to a nine-game conference schedule.

"I don't think we're going to nine conference games at this point in time," said Barnhart. "Through 2015 or so, we're solid, maybe 2016, somewhere in that range. We're not going to be at nine for a while, and if we are, that's another conversation down the road."

Of course the implication is still there that if the SEC does shift to a nine-game league schedule, the Battle for the Governor's Cup will be no more. That would be a shame.

I hadn't seen this picture until a few days ago, but it's pretty fantastic. 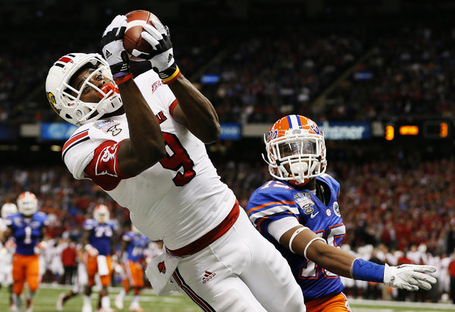 With the trip to the White House being the cap on the 2013 national championship, Andy Katz says it's now time to start looking at whether or not the Cardinals are capable of becoming the first repeat champion since 2007.

The starters of Smith and Jones, the spot play of Henderson, the potential return of Ware, the face-up shooting of Hancock, the contribution of Blackshear, the inside play of Behanan and Harrell make up a team that can win the title again. The one thing missing is the intimidating back-line defense of Gorgui Dieng, leaving that onus on Harrell and Behanan. How much the newcomers -- guards Anton Gill, Terry Rozier and big man Akoy Agau -- contribute is still to be determined.

Louisville will be the team to beat in the American Athletic Conference. The Cardinals should be considered as a preseason No. 1.

"It takes a little bit of luck and a lot of hard work and a great family type of chemistry,'' Pitino said. "We've got those things now. More than anything else we have to replace Gorgui Dieng. Peyton Siva had an unbelievable attitude but we've got some great guards coming in. We're very deep in the backcourt. We've got to replace Gorgui in the 5 spot. I'm not as confident as Russ Smith who told one of the New York tabloids that even though he was going to Spain and he would miss seeing the president that he would see him next year. We're not that confident as a coaching staff.''

When looking for an old quote, I somehow stumbled onto this old post from Feb. of 2009. If you ever get upset about something during this upcoming football season, just remind yourself of where we were a little over four years ago.

Congrats to dlpfis79, one of original handful of Card Chronicle members, who was the man who made the personalized Louisville Slugger given to President Obama on Tuesday. WDRB tells more of his story.

"Lifelong U of L fan, I was named after Derek Smith. I would've been born in Albuquerque had they gone to the final four in 1979," he said.

Luckily for Derek the Cards' quest that year fell short - making him a Louisville native, a Louisville fan, and now a gift maker for the leader of the free world.

"It's not too many jobs that I can see a picture of the president holding something that I made."

Congrats to Derek and to all the Cloids down at Louisville Slugger on their big week. Let me know when that limited edition DePaul Day bat hits the racks.

Also, a quick reminder that Slugger is still selling the specialty bat that was given to the President.

The Louisville staff has apparently spent some time this week putting the full-court press on 2014 power forward Jaylen Johnson. Here's a little of what he can do:

According to Jeremy Fowler of CBS Sports, the Big 12 and the ACC are still in the "exploratory phase" of creating a scheduling alliance.

I've got so many good "Michael" puns lined up if Dyer ends up coming here. Just wait.

The online publication All Africa has a nice profile of Gorgui Dieng and his agent and fellow countryman, Makhtar Ndiaye 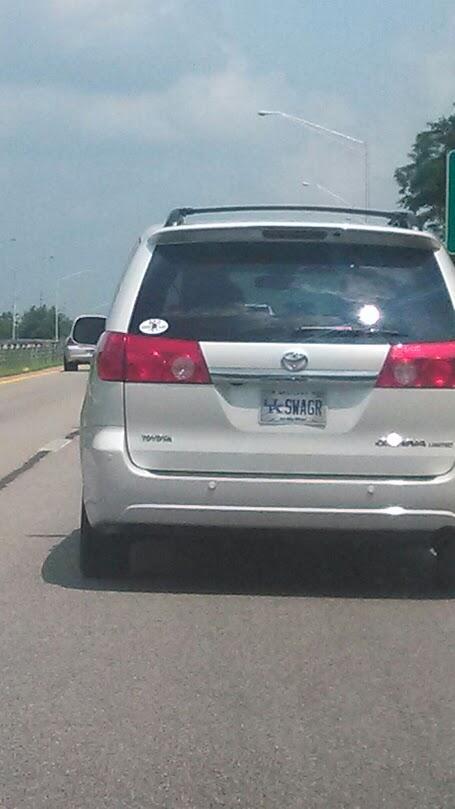 It's nice to know that if nothing else, we share the same sense of humor.

Florida International, the fourth opponent on Louisville's 2013 football schedule, has been picked to finish dead last in Conference USA.

And finally, Montrezl Harrell's gymrat mentality could pay huge dividends for both himself and Louisville in 2013-14.

"I think they were things I was capable of doing, but I wasn't as comfortable as I am now," Harrell told Sporting News. "Coach P has really gotten me more confidence in my shot.

"Getting repetitions up-that's really the thing he says. He tells me my jumper really looks good. Coming off screens, popping up to elbow. We do a lot of things like that."

Louisville assistant Kevin Keatts told Sporting News that the most important element of Harrell's improvement as a shooter is balance: elevating and landing from the same spot.

"Usually I'd be coming off, falling everywhere, falling back," Harrell said. "But getting so many reps in practice, I'm starting to land in the same spot, feeling better."

Trezurel: That. Is. What. You are.