Soon-to-be Estonian Prime Minister Russ Smith continued to make himself one of the biggest summer names in Northern Europe by dropping a game-high 29 points in the East Coast All Stars 71-68 win over Belarus in the opening game of the Four Nations Cup.

Russ the only American in double figures, connecting on 7-of-18 shots from inside the arc and 3-of-7 from outside it. He also snagged a team-high nine rebounds and again led the team in assists with six. The only downside to Smith's performance was five turnovers...and the following outfit decision.

Naturally, everyone who saw the picture understood that Russ was simply sporting the jacket of teammate Phillip Nolan. No one made anything of it. 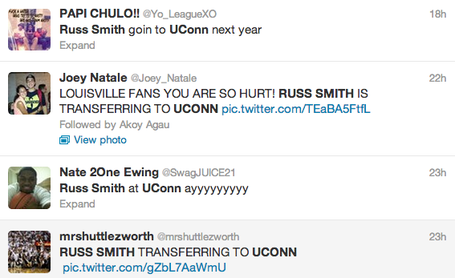 Anyway, the Americans trailed Belarus for nearly the entirety of Thursday's contest before mounting a furious rally in the fourth quarter in which they outscored their opponents, 26-11. Belarus turned the ball over 25 times, four of which were the product of steals by Russ.