Trey Boylan isn't thrilled about the recent absence of Cardinal News and Notes.

First off, a thousand and one apologies for the relative lack of content on the site recently. My vacation last week rolled into the wedding of one of my best friends over the weekend which is rolling into another wedding trip to Chicago starting tomorrow. I'm choosing to view it all as a national championship bender.

Anyway, we've got some catching up to do.

Zach Price announced over the weekend that he will be transferring to Missouri.

I'm not going to do what you all think I'm going to do and let out a Fuller Call, because I think the last two years have shown that we won that "battle." Anyway, thanks to Zach for all he did during his time here, and best of luck to him in Columbia.

On the heels of his May arrest, Terrence Williams has been waived by the Boston Celtics.

As of yesterday morning, Louisville is officially a member of the American Athletic Conference.

On a related note, as of yesterday morning I am the most hardcore AAC supporter on the planet.

Andrea Adelson writes that Tom Jurich is the MVP of The Year of the Cardinal.

Undoubtedly, there has been no bigger story in collegiate athletics than Louisville over the past year.

Tom Jurich has guided the Cardinals from an athletic department in disarray to one that is winning national titles and moving to the ACC.But you will never hear the man running the athletic department say that. Tom Jurich uses words like "magical" to describe the incredible run of success the Cardinals had in 2012-13, punctuated by an impending move to the ACC, as if outside forces pulled invisible strings to get Louisville where it is.

No magic was required. Jurich, widely recognized as one of the savviest athletic directors in the entire business, saw a small window in November to make up for a lost opportunity. Last year, the Big 12 decided on West Virginia over Louisville. Mountaineers fans rejoiced. Louisville fans cringed.

But when Maryland left for the Big Ten, Jurich had his second chance. If you know Tom Jurich, then you know he was not going to let this opportunity slip away. He started being proactive. And he ignored all the outside speculation that UConn was next in line to join the ACC. So much so, that a recent conversation about how Louisville got into the ACC went this way:

How did you outmaneuver UConn to get into the ACC?

"I didn't outmaneuver anybody," Jurich said. "I just put our story out there."

Well, UConn was thought to be the favorite to get the spot.

"Nobody told me that," Jurich said. "So I just worried about selling Louisville. That's all I worried about."

Rick Pitino's new book, which he wrote with the help of WDRB's Eric Crawford, is set to hit shelves on Oct. 1.

Forbes has a tremendous feature on Tom Jurich and the rise of Louisville athletics.

Louisville athletics was a pariah. An organization so mis-aligned, so bloated in inefficiency that the very conference it helped form had sued to expunge the university from its ranks. A desperate attempt to prevent the department's disease of non-compliance from spreading to the other members of the league. There was little hope for Louisville, its faith seemingly sealed as terminal.

In his influential work on organizational management, "Good To Great", author Jim Collins refers to the circumstances Louisville had fallen into as the "Doom Loop". The organization lacked internal accountability, failed to achieve credibility within its own community and had lost all authenticity with the college athletics community as a whole. It was not that the department did not want to change, but rather that it lacked the discipline to do so.

Those were the circumstances that faced Tom Jurich when he became the athletic director at the University of Louisville in 1997. Jurich understood that if there was any chance of salvation, he needed to reconstruct the athletic department to be built upon a foundation of accountability, integrity and honesty. Then, and only then, could a culture be born that would filter its way through the department and move it slowly out of a vicious cycle of disappointing results and stalled momentum.

"The department was out of control when it came to issues like compliance and Title IX," says Jurich. "We were staring down the barrel of a gun and potentially facing the death penalty from the NCAA. Either we made a decision right then and there to change the culture once and for all or we would forever be mired in our own self-sabotage," he adds.

Louisville might be the favorites to land a former LSU linebacker commit.

Champagnat Catholic coach Mike Tunsil posted on Facebook Monday night that his stars Travonte Valentine and Michael Johnson would both like to attend the same school. Johnson is a current U of L commit, while Valentine decommitted from Louisville shortly after pledging his allegiance to Charlie Strong back in May of 2012.

Johnson has drawn some significant attention from some big-name schools since his commitment to become a Cardinal, which has led to some wide-spread speculation that he might never make it to U of L. Tunsil alleviated those fears with some comments to the Courier-Journal last month.

University of Louisville safety commitment Michael Johnson and undecided four-star defensive tackle Travonte Valentine are among seven players rom Champagnat Catholic High School in Hialeah, Fla., visiting and working out at UK on Monday and Tuesday, U of L on Wednesday and Thursday, Cincinnati on Friday and Saturday and Tennessee on Sunday, according to coach Mike Tunsil.

Wide receiver Jason Williams is another one of the players attending, Tunsil mentioned.

Johnson has been mentioned as a possible soft pledge to Louisville, but Tunsil said on Monday that "He's solid" and looking forward to visiting other friends from South Florida who play for the Cards.

Tunsil said UK is recruiting Johnson, but the player is camping in Lexington primarily just to get the extra practice time.

As for Valentine - a player with countless major offers - Tunsil said he was actually committed to U of L for a short time last year before withdrawing the pledge. He remains interested in the Cards and is eager to visit U of L for the first time and meet its players.

Landing both of these guys would be quite nice. Losing both would be less nice.

Chane Behanan has spent a chunk of his summer playing in the Devores-City Gear Summer League, where he has been doing this:

Kyle Kuric, who just wrapped up his first professional season in Spain, will be playing for the Oklahoma City Thunder in the NBA Summer League.

Dan McDonnell is one of seven finalists for for the CollegeBaseballInsider.com's National Coach of the Year award. The winner will be announced tomorrow.

Before draft night, The Gorgster sat down with the folks from Nordstrom for a quick Q&A. Among other things, he discussed the infamous Giggling Gorgs GIF.

MSD: There's a famous video clip where you're on the bench, it looks like Coach Pitino shouts in your face, and after he walks away you kind of laugh-do you remember what he said to you?

GORGUI: "Yeah I remember that. But I don't think I can repeat it! [Laughs]. You know, I don't take Coach too serious because I know how he is. When he's on the court he just wants to go all out-he doesn't care what he does to win the game, he will do it. He has so much passion for the game. But, the player needs to understand that, too. So, even when he says some stuff, you know, I just laugh, because I think that's the best way I can handle it."

Also be sure to visit the documentary's Kickstarter page if you haven't yet.

Peep the first Flying Cardinal Challenge of the summer.

Baylor women's basketball coach, and 2012-13 CC Least Cool Person Tournament participant, Kim Mulkey, has been given a one-game postseason suspension for the comments she made about the officiating following her team's loss to Louisville last March. No idea why it took so long, but good. 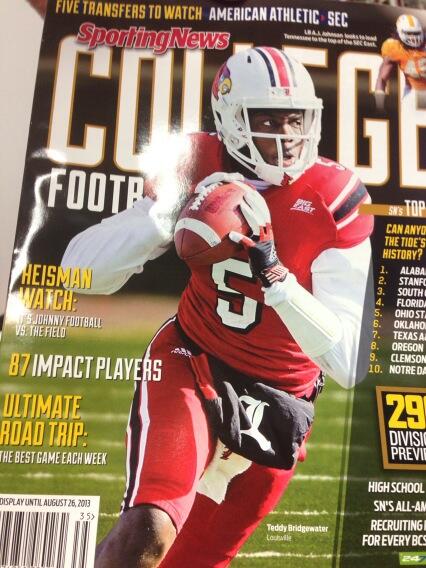 Deion Branch has drawn a little bit of criticism for the following comments:

"Aaron is a great guy and a great friend of mine and a great teammate," Branch told The Albany (Ga.) Herald over the weekend. "I love him to death, and it was shocking to hear his name involved in this situation. I truly hope and pray he doesn't have any dealings with it."

"That's my guy, man," Branch said of Hernandez. "That's my guy. It really shocked me. He was a great kid. Overall, I hope the best that he isn't involved with it and I hope he gets his name cleared, but most importantly I send my prayers and condolences out to the Lloyd family."

If he prefaces the initial statement with "the Aaron I know" then I don't think there's any issue here. I still think Deion deserves a break here. It's pretty clear that he was simply trying to get across that the Aaron Hernandez he knows isn't the one we've been seeing on television, and that's understandable.

Congrats to former U of L basketball player Tony Williams on being named the new boys' head coach at St. Francis.

The closing of Hollywood Park (and the fact that horse racing in California is on life support) makes me sad.

U of L hoops getting some love from Business Insider.

After seven years of serving as an assistant at U of L, Dale Cowper took over as Louisville's head track and field coach on Monday.

This is going to take a while to get used to: 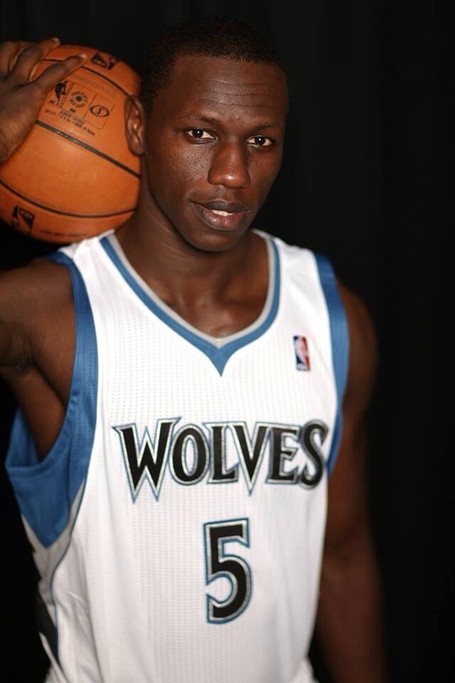 Although I do like that he's wearing a number that's probably as synonymous with Louisville basketball as any other.

Best of luck to all those guys in their quest to make The Show.

"I absolutely did (regret it). There is a piece of me that said that and I did say it," Castiglione said. "I understand why others felt the way they felt, but I don't think there's any secret (we wanted Louisville)."
...

"People can disagree with me, that's OK," he told SoonerScoop.com during an interview late last week. "I don't think there's any secret how our president David Boren and I felt about the University of Louisville. We were very supportive and even somewhat proactive at trying to build a case or a perspective for them as a member of the Big 12."

"If you were to go and see the University of Louisville's facilities, you look at their financial resources, you look at their success across the board, you look at how they've improved academically and the growth of that campus and accessibility, and the fact we had another member institution in that area, there were reasons why we felt it made some sense," he explained.

It made sense to Oklahoma, but not to the majority.

"We get it and we're doing well," said Castiglione of other conference members not being ready to add the Cards. "When we move forward that's the benchmark we're using to make decisions."

As you might have expected, the folks in Minnesota are already fans of Gorgui Dieng's attitude.

As for Peyton Siva, he's confident that he can help the Detroit Pistons right away.

Someone probably a shirt to celebrate the making of this shirt. 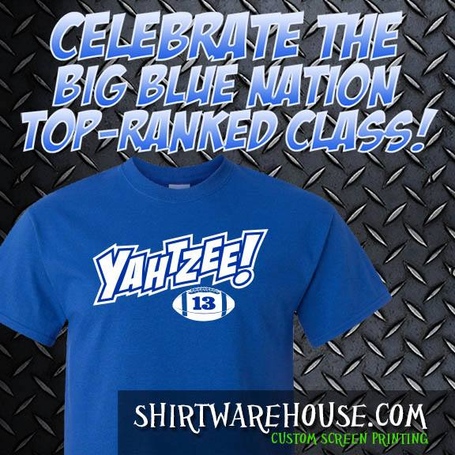 And finally, plenty of people are talking about Eric Crawford's interview with Bobby Petrino, which you can watch (and read about) right here.