GySgt Wesley Key representing at the top of The Unsterberg, a mountain massif of the Berchtesgaden Alps that straddles the border between Berchtesgaden, Germany and Salzburg, Austria. It's now ours.

You have just a little over 24 hours to vote for Rick Pitino, the Louisville women's basketball team and Angel McCoughtry to bring home ESPYs. Make sure you do so.

The kids are all ready for LA and the show. 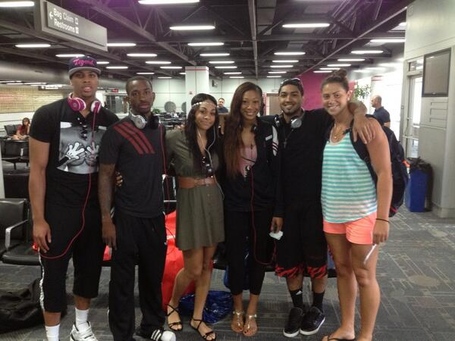 Not sure I could be a bigger fan of Wayne's entire outfit.

It enhanced viewing video of Watson's star quarterback, Teddy Bridgewater. And it inhibited viewing the tears that well up in Watson's eyes when he talks about Teddy.

"He is one of the five best people in my life," Watson says, brown eyes brimming.

The 53-year-old football lifer can get emotional about a lot of things - but with Bridgewater, the affection is always percolating just below the surface. Sometimes it spills over, and spills down his cheeks.

"We're in each other's head," Watson said. "It's a unique bond that way. We come from two totally different worlds, but we share the same love for the game."

These are the days, man.

Today's announcement that the Louisville/Kentucky game will be on ESPN means that six of the eight Cardinal games with announced coverage will be on either ESPN or ESPN2. Not bad.

DeVante Parker is the latest football Card to pick up some summer lovin' after being named to the Biletnikoff Award (top wide receiver) Watch List on Tuesday.

Gary Parrish writes about the Summer of Rick.

And Pitino, 60, is so big of a Pitbull fan that he went to a concert recently at the Hollywood Bowl to celebrate his son Ryan's 23rd birthday. It was Rick, Ryan and a few friends. Rick knew a guy who knew a guy. So the whole group ended up backstage.

"We got to spend about 40 minutes with Pitbull," Pitino said. "And because the concert was at the Hollywood Bowl, a lot of the people he collaborates with were there. So Chris Brown came out for the second song. And Enrique Iglesias came out. Marc Anthony. J. Lo. So, at the end of the concert, Pitbull says, 'I want to thank everybody for coming out. And I want to thank Coach Pitino. And, by the way, happy birthday to his son, Ryan.'"

Coach Pitino smiled big at this story. He laughed. And it became clear, at that moment, that the story he was telling was less of a Pitbull story than it was a family story that highlighted how Pitino seems to be in a really good place right now, both personally and professionally, just three months after making his seventh Final Four, winning his second national title and getting inducted into the Basketball Hall of Fame.

Speaking of Pitino, he appeared on The Terry Meiners Show Monday afternoon and said, among other things, that Wayne Blackshear is in fantastic shape and has been tremendous in practice so far.

That's all well and good, but don't think the name is changing. Fat Joe wouldn't go through an identity crisis just because his commitment to Weight Watchers started paying dividends.

Drew Deener gets his hands on a CCBM and handles the weight of the moment with grace. 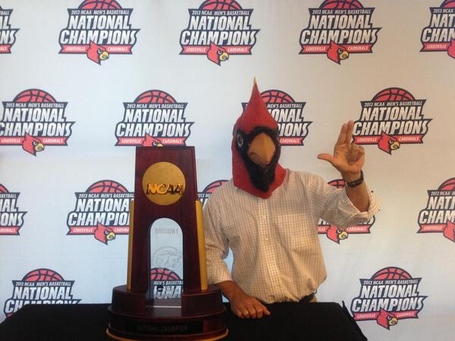 After all the bickering and general nastiness we've seen over the past few days, this is awfully refreshing. I want to adopt the kid in the green shirt.

Named after the late longtime educator and coach in the Luxora school system, the recreation center was the site for a full day of activities for Mississippi County children and for a successful native Arkansan to return to Northeast Arkansas and visit with friends.

"I'm just so happy to be back home and come back to Mississippi County and come back to a community that my father was such a big part of," said Strong. "He was a coach and educator here ... It's such a special day."

Making the day even more special for Strong was the county proclamation that Friday, July 12, 2013 be "Charles Strong Day."

"It's just so special that I could have a mentor like that. Someone that you can follow and continue in his legacy."

I celebrated Charles Strong Day by buttoning all my buttons and dumping confetti on my head. I think most people got it.

Kentucky fans will defend Grown Ups 2 to the death.

Class of 2014 commits LJ Scott and Daniel Gresham are ACC-ready. 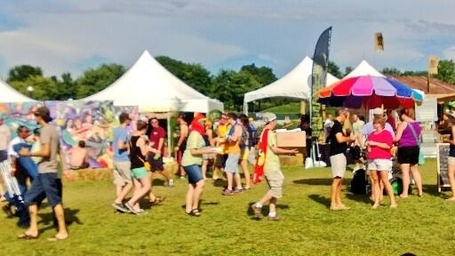 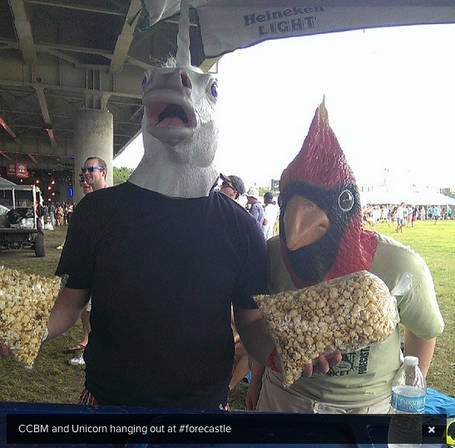 No one can say for sure that the second picture caused Sunday's evacuation, but let's be real, it did.

Dana O'Neill takes a look at the Hall of Fame Tip-Off, which should culminate with a Louisville/North Carolina showdown.

The experts are pretty torn in how they think the tournament is going to play out.

Title-game prediction: Louisville over North Carolina. Everyone will be trying to upset the king this year and so the road won't be easy for the Cardinals. But Louisville is just too loaded with experience, even for a very good Tar Heel team.

Who others are picking:

You have to admire the dedication.

Angel Delgado, one of Louisville's top targets in the class of 2014, is transferring to Huntington Prep for his final season of high school ball.

And finally, I'm helping Jared Stillman fill in for Jason Anderson from 4-6 this afternoon on ESPN 680. Listen in as I give my thoughts on the new depth chart, Louisville's recruiting efforts and how the hell Belle managed to get the Beast up onto that horse by herself when she found him unconscious in the woods.