That's Coen Ball reacting instinctively to finding a cardinal while at the Carnegie Natural History Museum in Pittsburgh. It's a glorious reflex.

Just in case you needed a reminder, you should be cherishing every second that Teddy Bridgewater is a Louisville Cardinal.

Snider, at 6-1 and 166 pounds, figures to be more a traditional point guard in college. He's quick to get in the lane and solid when shooting from outside.

And Aaron (6-7½, 176) - "an elite-level scorer," according to Scout.com analyst Evan Daniels - can shoot from deep, attack the rim or see over defenders to deliver a pass.

"That three-man class is a really strong start to 2014 for them, and those are three guys who can help them immediately," said Daniels, whose site ranks U of L's class No. 2 behind North Carolina. "They're not just three recruits. They're three impact players for them."

These are the best times.

Louisville football added another name to the preseason watch list...list...on Tuesday when Gerald Christian - who will bear the glorious No. 18 jersey - was named to the John Mackey Award Watch List for the nation's top tight end.

I wore my Fear the D shirt to a Cubs game at Wrigley Field on Saturday and it was the greatest experience of my life. Also, it's insane how little people in Chicago care about DePaul basketball. Did I say insane? I meant understandably rational.

Jason King says the ACC is one of the biggest winners in the latest conference shakeup.

ACC: No other basketball conference will ever be as strong as the ACC thanks to the additions of Syracuse, Notre Dame, Pittsburgh and (starting next year) Louisville. Think about it. North Carolina, Duke, Syracuse and Louisville all have won NCAA titles in the past 10 years. Notre Dame has won 21 or more games the past seven seasons under Mike Brey, and Pitt finished fourth or better in the Big East six of the past eight years. In some ways, winning the ACC regular-season championship will be just as difficult a feat as winning the NCAA title.

As a bit of a follow-up, Dana O'Neill says the result of the realignment madness isn't nearly as bad as we thought it'd be.

Louisville's full non-conference basketball schedule won't be released for another several weeks, but more and more of the opponents and dates are being set in stone. The latest is a home game against Southern Mississippi and former Morehead State head coach Donnie Tyndall, which will take place on Nov. 29.

Peyton Siva played the best game of his extremely short professional career to date, scoring 12 points and dishing out seven assists in Detroit's 79-75 loss to Oklahoma City. Kyle Kuric was on the court for the Thunder, and scored five points on 2-of-7 shooting.

Shoni Schimmel was also on the court on Tuesday, scoring six points in Team USA's blowout win over the Czech Republic at the World University Games. 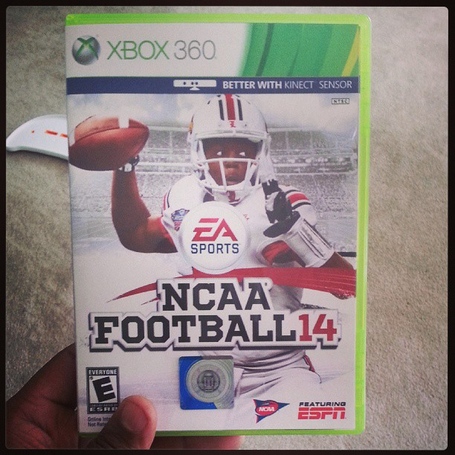 According to his head coach, five-star quarterback Kevin Dillman from California will visit Louisville (as well as Tennessee, Vanderbilt and Alabama) this weekend. The 2015 star already has scholarship offers from U of L, UT, Florida State and Arkansas, among many others.

In less than two weeks I've driven to and from both Hilton Head and Chicago, and my main company on the bulk of all of those drives has been FM radio. That being the case, I'm now sick of every Top 40 song in the country. Near the top of that list is the remix to the song "Cruise" by Florida Georgia Line, which features Nelly.

Now if you spent any amount of your teenage years in the early 2000s, there's a very high chance that Nelly had a profound impact on your life. You probably have a small understanding of who Courtney B is, you went on the wild ride that was the St. Lunatics, and even though you don't know what an L is, you know it's smoked in the back of a Mercedes Benz.

The same man who provided all of that good fun now seems to be in the midst of a midlife crisis that is on full display for the world to hear every single day. First there was the duet with Tim McGraw, then there was the over-the-top poppy "Hey Porsche," and now there's this work on that one crossover country song that is unavoidable every year ("Dirt Road," "Wagon Wheel," etc.).

Genre crossovers, whether in solo or collaboration form, are fine. In fact, I enjoy them. But here's the thing: I've seen the video for "Tip Drill." I've seen it a lot. When you have that imprinted on your brain (I do), it makes hearing the same artist featured on a song that includes lines like And this brand new Chevy with a lift kit would look a hell of a lot better with you up in it more than just an obvious sellout, it makes it annoying.

I suppose we should have seen this coming with "Suit" and "Sweat," but I can't say that I did.

Pour one out for Band-Aid Nelly. He is gone and I am sad.

Five-star class of 2014 forward Leron Black trimmed his list of schools to Illinois, Indiana, Baylor, Florida, UConn, Tennessee, Memphis, Arizona, Louisville and Ohio State on Tuesday. Black said recently that U of L and IU are the two schools currently recruiting him the hardest.

Rick Pitino has made it known that he's after a big man in the 2014 class, and one of his top targets is Cliff Alexander, a player for whom he has more than a little competition.

Five-star Chicago big man Cliff Alexander, who has U of L, IU and Kentucky in his final 10, mentioned Louisville, Kansas, Arizona and Memphis as schools he wants to officially visit.

"I love Louisville," he said. "Coach Pitino is a great guy."

He said UK and Michigan State - two schools long thought to be well-positioned with Alexander - were not included on his list because he has visited both campuses unofficially and wants to see new places. He said it's not a sign of any decreased interest in either team and that he has no favorites at this point.

"Coach (John Calipari) has been recruiting since last year when they first offered me," Alexander said. "I love him. He's a great guy."

Alexander said Calipari talks or texts him about three times a week "and tells me he wants to coach me."

Another big man Pitino is focusing a large amount of attention on is Goodluck Okonoboh, a player we should all want for obvious reasons.

YouTube hero upfromtheashes has uploaded a number of full Louisville classics, including the 2003 Louisville/Florida game in which an emotional Francisco Garcia led the Cards to an upset of the No. 1 Gators. You can check out all the new additions on his channel.

I'mma show YOU how great I am. 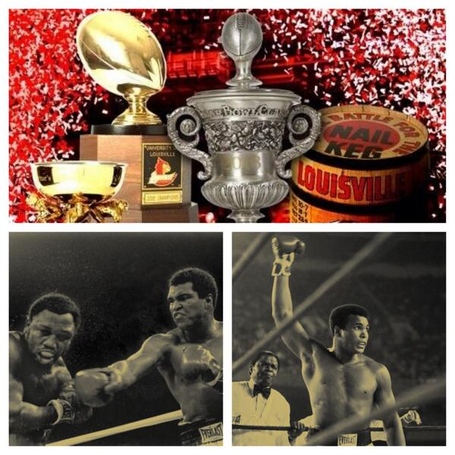 Phil Steele has spent his Monday breaking down who he thinks will be the 25 most-improved defenses in 2013, and he has Louisville at No. 11.

"I see it as, unless God himself comes down and tells me I need to stop, then I'm not going to stop until I can't go anymore," Harris said. "I just see it as motivation because I can still walk, I can still run, I can still cut, so why should I stop?"

Harris has been out of action since last August, when he tore his left ACL in preseason practice. He recently had scar tissue cleaned from that knee, so his current rehabilitation is still just focusing on strengthening his legs.

The devastating experience of missing two seasons has Harris taking a different approach to preparing for this season. He said that last August he was only about 85 percent to 90 percent healthy when he started playing again while recovering from the torn right ACL.

That's why his goal now isn't to make it back for the start of fall camp. It's to feel 100 percent healthy whenever he lines up again.

"I try to take something different from my injuries, so this year I just want to get through the season," said Harris, who expects to be ready before the season opener Sept. 1 against Ohio. "I want my goal to be to get to the bowl game or get through the last game of the season rather than be able to go full throttle in camp."

You just have to hope that eventually we're going to see the best of this kid.

It makes me a little sad that I've barely eaten at half of the 18 essential Louisville restaurants.

Former U of L soccer standout Paoolo "Salt" DelPiccolo has signed with the Montreal Impact of the MLS. DelPiccolo, who had been playing professionally in Germany, was taken by Montreal with the 27th overall pick in the 2013 MLS SuperDraft.

There's a fantastic CCBM cameo in this month's U of L alumni magazine. 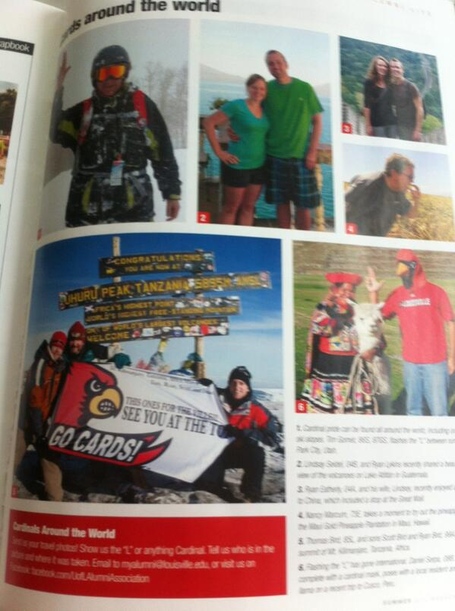 Something called KFox 14 has Louisville ranked No. 7 in its preseason top 25 thanks in large part to two wide receivers who play for Houston.

Even though he's *wipes away single tear* sitting this year out, Titus Teague is rated as a 92 in kickoff returns on the new NCAA Football 2014 video game. Titus has noticed and is pretty fired up about. 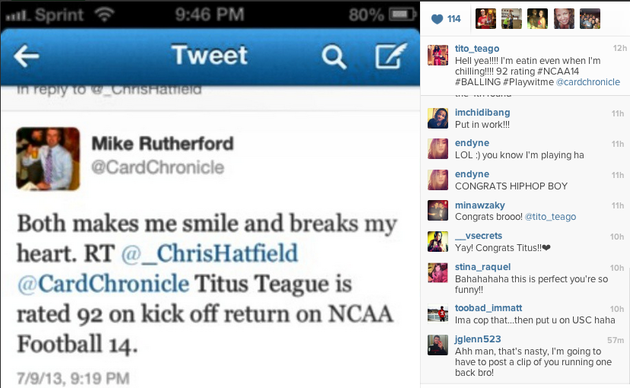 Four-star wide receiver Blake Bone says he has a current top four of South Carolina, Louisville, Kentucky and Ole Miss, with the Gamecocks slightly ahead of the Cardinals.

Graphic designer Tim Haag will be posting 50 U of L football designs on his Twitter page between now and the start of the season. You can follow him here.

In the gambling world, Louisville is one of the five worst home teams in college football.

The Cardinals enter 2013 as a dark-horse contender for the national title. Louisville has a solid chance of going undefeated, with a very easy home slate. Last season, UL went 3-4 ATS at Papa John's Cardinal Stadium, and that was against much tougher competition. The expectations are high this year and the home pointspreads will reflect that.

And finally, the U of L baseball team is auctioning off a bat signed by the entire 2013 College World Series team. The bidding on the item has already started.