Share All sharing options for: Louisville's New Baseball Uniforms Will Turn Some Heads

ESPN business reporter (or something) Darren Rovell tweeted out the following picture Saturday afternoon, saying it was the "first look" at Louisville's special College World Series uniforms for adidas. 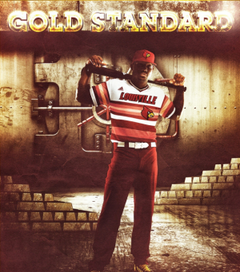 Now I'm not sure if he meant that these will be Louisville's uniforms if they make it to the College World Series or if they'll be wearing them for the super regionals, but I'm pretty sure the truth is the opposite of whatever he meant, because Darren Rovell is usually wrong.

These uniforms are going to be hated on just like the camos or the infra-reds, but we're sort of at a "you can't say sh-t about us" point right now, so whatever. Let's go ahead and ride these bad boys to another title.