Sophie's father (or mother), Brett, sent me this picture with a cheesy line about her "having a lot of heart." I legitimately just got the reference 10 seconds ago. I thought those hearts on the bench were part of a deer antler hat she was wearing. I'm not good at identifying deer antlers.

Gordon Gee becomes just the latest proof that if you cross Rick Pitino in 2013 you will be buried. Not literally...most of the time. Some of the time, though. Allegedly. Probably.

He had my fish killed.

The Cards have players accustomed to the system. They have a coaching staff that has remained nearly intact. Strong hopes that helps the team remain focus despite the outsized expectations.

"It's all about leadership. You have guys that have been in the program. We're going into our fourth season as a coaching staff so we feel like we've established enough with our players that they understand the workload and what it's all about now."

The latest on the Wes Lunt front is that he will, according to ESPN's Joe Schad, meet again with Illinois tomorrow before making a decision. That decision could reportedly come as early as this Friday or as late as the second half of next week.

Considering that Illinois was considered a heavy favorite before Lunt's visit to Louisville and the Oklahoma State transfer still hasn't made a decision, I'd say we have more than a puncher's chance here.

Chris Jones is on campus and already bonding with one of his new backcourt mates. 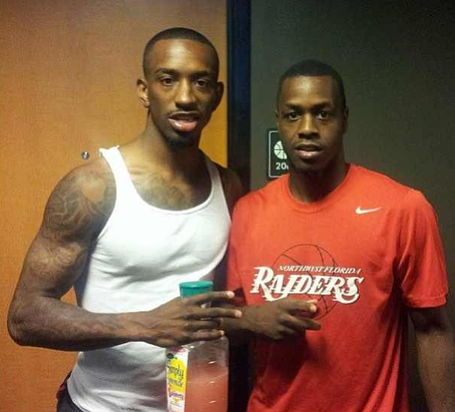 According to Rick Pitino at Tuesday night's Cardinal Caravan, the only two Cardinals not currently on campus are Luke Hancock and Terry Rozier. But fear not, worry warts, Rozier is expected to be here in less than a week. Hancock is touring with the Beatles.

Also, I've never purchased a thing of Simply Lemonade (raspberry OR original) and had it last more than three days. Double also, a "p" in raspberry? Did I just forget that or is this my "learn something new every day" moment? I feel like I knew it at some point. Probably not.

The Louisville basketball program continues to get the job done in the classroom.

Alabama and Louisville are performing almost as well in the classroom as they do on the playing field.

On Wednesday, the reigning national champs in the two most visible college sports made the NCAA's honor roll for academic success. Louisville was one of 35 men's basketball teams to score between 978 and 1,000 on the annual Academic Progress Rate. Alabama was one of 13 Bowl Subdivision schools to make the cut.

In all, 976 teams made the most recent list that covered the four-year period ending in 2011-12. Alabama won the national championship then, too, and Louisville reached the Final Four.

Also, we got lots of trophies and stuff. 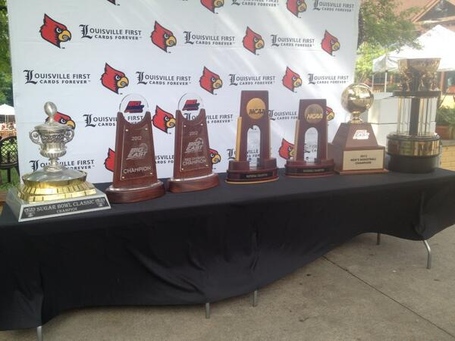 If you were looking for Louisville's (and everyone else in the ACC's) cross-divisional opponents between 2014 and 2024, here's a useful graphic. Sort of sucks that we only get Virginia Tech once in 11 years, but then again there's always the potential of a conference championship meeting.

Gotta love the still image on the trailer for the new NCAA Football video game.

Well I guess you don't have to, but if you're reading this you probably ought to at least get some enjoyment out of it.

The football team began its summer workouts bright and early Tuesday morning, and apparently some of the newcomers weren't quite prepared for the unstoppable force of intimidation that is Pat Moorer.

Congratulations to Louisville's Kyle Funkhouser and Anthony Kidston, who were both named Freshman All-Americans today.

Howie Lindsey says the gap between the Louisville and Kentucky athletic programs has never been larger.

As for Kentucky, the Wildcats lost to Louisville for the second straight season, failed to win a single conference game and finished 2-10 for the season. After the season, Kentucky fired homegrown coach Joker Phillips and replaced him with the defensive coordinator from Florida State, Mark Stoops.

In basketball, there didn't appear to be much of a gap between the two rivals at the beginning of the season when both were ranked in the nation's top three by most preseason polls.

But then things went south for the Wildcats. The painfully young Wildcats were 17-6 when star center Nerlens Noel went down with a knee injury. They finished the regular season 21-10 and still held out hope for an NCAA bid until they lost 64-48 to Vanderbilt in their first game of the SEC Tournament.

The Wildcats went out with a wimper in a 59-57 loss at Robert Morris in the first round of the NIT.

A sight that all Louisville fans this time last year were hoping we'd be seeing this summer. 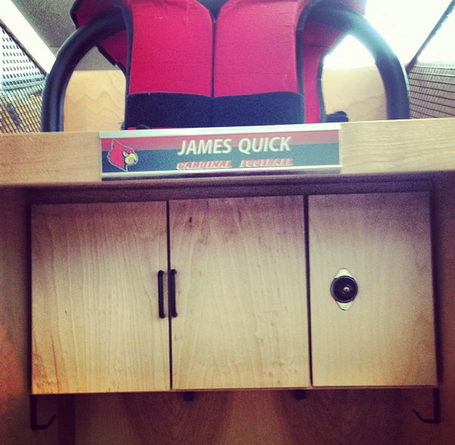 If you have plans to make the trip down to Nashville this weekend to watch the Cards in the super regionals and are still in need of tickets, check out this link.

Fans interested in participating in a March Madness-style bracket challenge for the rest of the NCAA baseball tournament should check this contest out. A Grand Prize winner will be randomly selected from among the four highest bracket point totals and will win a $500 online gift certificate to the NCAA Shop, and one additional randomly selected winner will receive a $100 gift card to the NCAA Shop.

Matt Hayes continues to be awful.

For those who think the Cardinals should be ranked higher based on their Sugar Bowl performance, we remind you that they were playing against an opponent who didn't care (Florida) and that the Cardinals should have lost to Southern Miss, a team that didn't win a single game all season, in 2012. That said, star quarterback Teddy Bridgewater could make those qualifiers go away with a few flicks of his wrist. And, you know, Louisville does play in the American Athletic Conference (see: gift-wrapped unbeaten season).

He's also still confident that Willie Williams is headed to West Virginia to be a star.

I spent last weekend at a bachelor party at Belterra, and was pleasantly(?) surprised (disappointed?) by the number of folks at the casino wearing red 2013 national championship gear. Taking the cake, however, was the elderly man with the championship hat, championship shirt and championship sticker on the front of his walker. He's everything I aspire to be in the unfortunate event that I ever grow old.

Baseball America's list of the top MLB prospects in the state of Kentucky is littered with Cardinals.

Mike Aresco says he nearly named the AAC the "Metro Conference," which would have been pretty cool.

Miller also says that Bridgewater is easily the best quarterback in the draft class and could potentially challenge Jadeveon Clowney to be the No. 1 overall pick.

On a related note, I'll give you -.03 guesses as to whom is at the top of Lost Letterman's AAC QB rankings.

I never had any feelings of ill-will towards Terrence Jennings for leaving U of L early to play pro basketball, but aligning himself with Quacky... 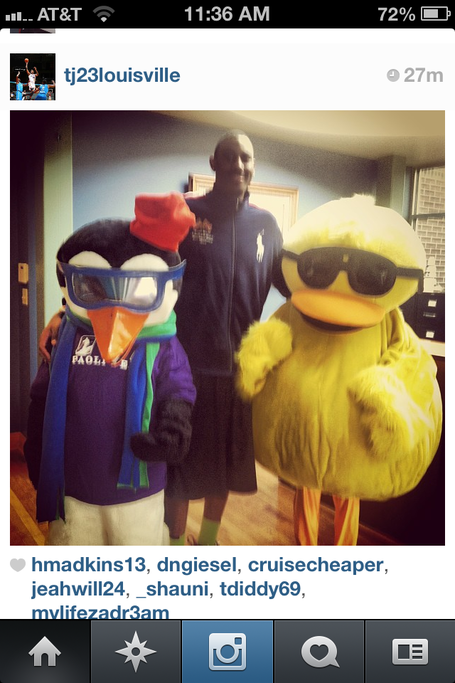 Betrayal is the only truth that sticks.

The complete 2013 U of L men's soccer schedule has been released.

ESPN's Matt Fortuna breaks down the strongest and weakest positions for Louisville heading into nest season.

Hold off the angry emails and tweets all at once. No, this is no knock on Teddy Bridgewater, who is the best quarterback in the conference, maybe even in the country, and deserves all of the praise he has been getting this offseason. But this series is about position groups as a whole, not just one player. And even though there is only one quarterback on the field, there is some uncertainty about who Louisville has behind Bridgewater, especially after the loss of Will Stein. At receiver, meanwhile, the Cardinals are stacked. They were the best passing offense in the league last season, 24th overall in the nation, and they return their three leading pass-catchers from that unit. Damian Copeland (50 catches, 628 yards, 2 touchdowns in 2012), DeVante Parker (40, 744, 10) and Eli Rogers (46, 505, 4) are forces to be reckoned with, and they will be nightmares for opposing secondaries to prepare for this fall.

Fortuna says the weakest position for Louisville is offensive line.

In what is already (easily) the most overblown story of the summer, Fortuna also wonders whether not having a Heisman Trophy campaign actually helps Bridgewater's chances of winning the award.

Last movie you saw at a drive-in theater...GO...

Also saw Independence Day there and seeing Alex from "Saved By the Bell: College Years" being blown up on top of a building on a massive movie screen was one of the defining moments of my childhood.

Take notes, youngsters, this is how refrigerator art is done. 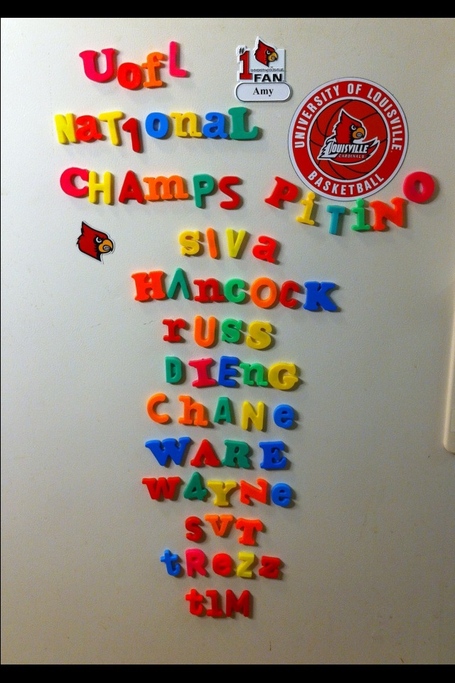 If I walked into the kitchen and saw that my kid had done that, I'd let them stay home from school for a year. We'd enjoy the MTV2 morning lineup together. Obviously, they'd be that cool.