Share All sharing options for: The Rick Pitino Maker's Mark Bottles Are Here

At a press conference Tuesday afternoon, U of L released what the new Maker's Mark bottle featuring Rick Pitino looks like, and it is predictable glorious. 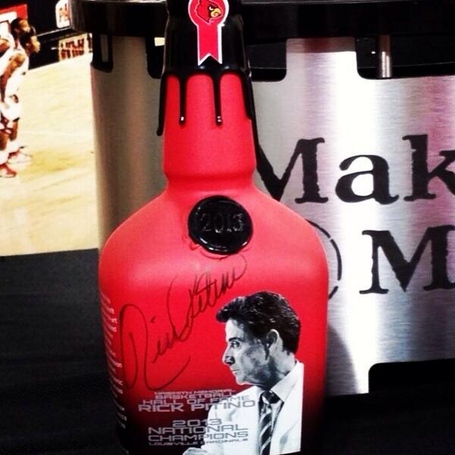 The bottle is the second of a three-year commitment by Maker's Mark, which has pledged over $500,000 in support of the Academic Center of Excellence. A total of 12,600 bottles will be available to the public beginning on Friday. Pitino will also hold a public signing.

A year ago, Maker's Mark began the series by featuring Louisville football coach Charlie Strong on a commemorative bottle. The bottle was a huge success, selling over 8,400 in record time.

The Rick Pitino Summer Tour of World Domination rolls along.