These bad boys will be hitting the streets (and houses) beginning tomorrow: 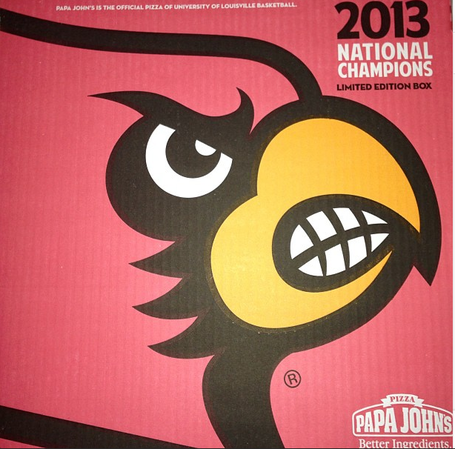 Am I framing mine and hanging it on my wall? Not sayin' I'm not.

Here's more from the Papa himself:

"We are excited to roll out this special pizza box to honor the outstanding achievements of the University of Louisville men's basketball team," said John Schnatter, Papa John's founder, chairman and CEO. "With Papa John's headquarters based in Louisville, it was exciting to watch our hometown Cards win the national championship, which was the pinnacle of what was an incredible year for U of L athletics."

Customers should call their local Papa John's to see if the pizza box is available at their restaurant.

Headquartered in Louisville, Kentucky, Papa John's International, Inc. (NASDAQ: PZZA) is the world's third largest pizza company. For 12 of the past 14 years, consumers have rated Papa John's No. 1 in customer satisfaction among all national pizza chains in the American Customer Satisfaction Index (ACSI). Papa John's is the Official Pizza Sponsor of the National Football League and Super Bowl XLVII. For more information about the company or to order pizza online, visit Papa John's at www.papajohns.com, or visit us on Facebook at www.facebook.com/PapaJohns, on Twitter at http://twitter.com/PapaJohns, or on our blog at www.papajohnsblog.com.