Throwback Thursday: Eric Wood Talks About His Time At Louisville

Share All sharing options for: Throwback Thursday: Eric Wood Talks About His Time At Louisville

I'm selfishly looking forward to Eric's eventual retirement from football so we can be treated to more stuff like this (originally published back in 2011). A very talented guy both on and off the field.

On recruiting and deciding to come to Louisville

As far as coming to Louisville goes, I could have never imagined that it would have worked out as well as it did. Brian Brohm and I always joke about how small he thinks I was on my visit, and how much bigger I got when I came back that summer for training camp. It may have had something to do with hanging out with guys like Jason Spitz and Travis Leffew, and realizing exactly what a Division 1 offensive lineman looks like.

I was not heavily recruited coming out of Elder High School in Cincinnati, but I believe if I had "played the game" as far as recruiting goes, I probably would have picked up a few more scholarship offers. I didn't do any of the summer camps or any of the high school combines, mostly because I was constantly playing basketball in the summer time, which is what I loved to do the most.

I was offered by Louisville (which may seem appropriate now) after a few of the coaches came to watch me play in one of my basketball games. I never sent out a highlight film for football, so I guess that the best way for them to see my athleticism and potential was on the basketball court. I will always remember joking with my buddies after committing to Louisville how I could hopefully make the Cincinnati Bengals practice squad one day and earn $80,000 a year! Things worked out a lot better than I could have imagined. 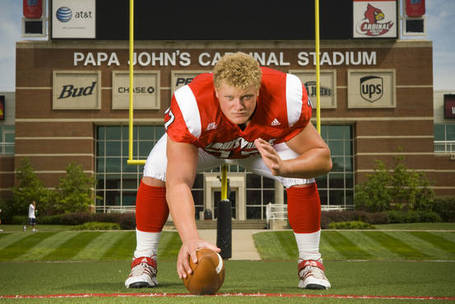 My favorite moment playing at Louisville was winning the 2007 Orange Bowl. I knew we had the chance be good when I came to Louisville, but I didn't know just how good, and consequently, how bad we would be in my time there. The year we won the Orange Bowl I believe we could have beaten anybody. Looking back on how many players we had who play in the NFL now or had stints in the league is astounding to me.

My least favorite moments in college football were probably both of the Rutgers games in Piscataway, NJ. One ended our hopes of a National Championship, while the other ended my college football career on a terrible low.

My favorite road trip was the trip to Cincinnati my junior year when we upset the nationally-ranked Bearcats at Nippert Field. Returning to my hometown knowing that Cincinnati was having a better season than us at that point of the year was embarrassing. Carrying around the Keg of Nails after the game with all of my friends and family in the stands is something I will remember forever (I will also be forced too because my mom has a picture of it in our living room).

On Playing for Coach Petrino

Coach Petrino continues to climb higher and higher in my books the older I get. It is hard to realize it at the time because you're walking on eggshells a lot, but that man is one heck of a football coach. Coach Petrino had no filter, and neither do I, which may be why we got along really well at times. I remember one night he called me up at 9:00 PM to chew me out and tell me how bad of a practice I had. At the time I lived with Travis Leffew and Jeremy Darveau, and they could hear him from across the room. Think about how awkward it was passing him in the hallway of the complex the next morning.

On his position and development

My first two years on campus featured many highs and lows. I got to campus expecting to hop into a starting role, which is what every high school player will hear from the coaches during the recruiting process. Fortunately, I didn't have to play and was able to redshirt that year. I did get to travel with the team though and learned a lot which helped me.

In the spring of that year I was able to hop in at starting right guard. Spitz was playing center and the guard spot opened up. Somehow I caught mono though, and wasn't able to practice the rest of the spring. Don't know how that happened amongst the practice, workouts, studying, and partying (sarcasm). I thought my chances of starting were out the window at that point until one day during training camp when Coach Petrino told me to start taking snaps with the centers. Little did I know at the time that center would be my new position and I would never miss a game as a Cardinal.

I was fortunate to start 49 consecutive games at center, and I got really lucky after I tore my PCL my senior year right before we had a bye week. After being named a Freshman All-America after my first season, it definitely gave me a lot of confidence to lead the team and play at a high level over the next three years.

On his senior year

After my junior year I considered moving on to the NFL. I had received a fairly high grade from the early draft entry reports and we were not coming off a good year. Also, many of the guys I had come in with were moving on: Brian Brohm, Mario Urruttia, Scott Kuhn, Gary Barnidge, Lamar Myles, etc. I had been training for combine prep for about three weeks when I decided that I was going to come back for my senior year.

The first night of meetings back in Louisville was the same night of my grandma’s funeral. Everyone thought I was leaving (that was a fun night of answering phone calls). After deciding to come back I told Dane Mattingly that we had to make this the best year ever. We went on a campus crawl to experience other colleges, I went on my first spring break, went to the Bahamas, started dating the girl who is now my fiancé, and so on.

Needless to say we had a lot of fun, but I was still constantly working my butt off to make sure that I would have a dominant senior season. I set Coach Kenn's conditioning record that summer for all positions and for all players that he had ever coached, which was a great accomplishment in my eyes. All of my hard work paid off because I made it in the first round in the draft the following year. My dreams came true and I was able to start in the NFL. 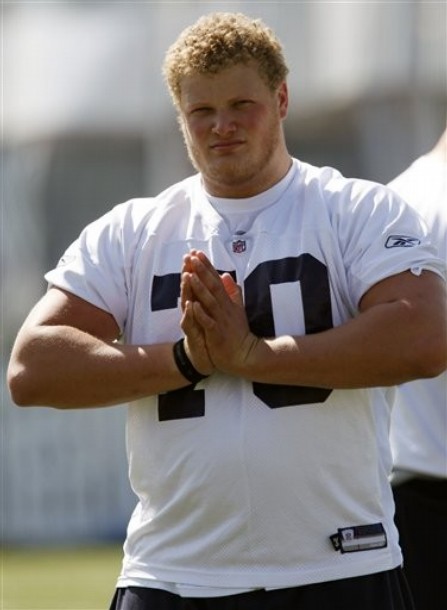 On playing for Kragthorpe and the current program

Playing for Coach Kragthorpe was much different than playing for Coach Petrino. Under Kragthorpe our program was run more like an NFL team. We had a lot more freedom and, given the right group of players, it could have been perfect. I don't think at the time our team was mature enough to handle it.

I like Coach K a lot and think he is a great person. I wish him nothing but success in the future and he helped me become a better player while playing for him. I realize that is not the response a lot of Card fans would like to hear, but I feel like there is more than one way to win as a coach. Unfortunately, his recipe just didn't fit our team at the time

As for the state of the current Louisville team, I like the direction they are going. Players win games and I think Strong realizes this. I have met Coach a few times and he seems like an awesome guy! I couldn't be happier with him at the head of our program.

Anyone who knows me knows that I can be a bit of a crazy dude at times. It helps on the field, but has also provided some entertaining in-game moments. Here are a few:

-After thinking Pat Carter lined up off the ball on the QB sneak against UK, I think it took the whole team to retain me from killing him on the sideline. Now that I think about I am pretty sure it was Harry. (This will be a common theme, but anyone who I write about on here I am actually friends with and we have since made amends)

-After giving up a QB hit during a game my junior year, I threw a Gatorade down in front of me and didn't see our offensive line coach Brent Myers standing in front of me. I soaked him from head to toe.

-I once asked for a woman to be removed from our sideline because I had never seen her before and she was joking around when we were losing. (Never have seen her again to apologize)

-I Accidentally gave our offensive line coach a concussion while chasing an interception out of bounds. (another tough moment for my boy Coach Myers)

-The trainers started packing up early on the sidelines down in South Florida when we were getting whooped so I served water to the offensive players and then threw the water tray. Some of the fans started heckling me so I did the only thing you can do in that situation: I said that one of the guy's wife was ugly (regret that).

-Choked a guy from Pitt because he kept ripping my helmet off and we got a 15-yard penalty on a 2-minute drill. I thought I was going to get yelled at on the sidelines by the coaches but they had my back. Looking back on that it was nice of them.

-I think I set the record for most fights in practice for a career. I texted some of my buddies from Louisville when I got into my first fight in the NFL, and they had all seen it on the NFL Network already. I stopped doing that on the days the NFL Network comes to practice.

I think I'll stop here in case I either, 1) one day write a book and need more stories or 2) people are sick of me rambling and think I'm the biggest jerk of all time based on a few of my vast array of stories from college ball.

In all seriousness, I am very lucky to be in the position I am in today. There have been so many people who have helped me get to where I am and there are so many opportunities that I was lucky to receive. Family, friends, and coaches can be thanked for anything that I have accomplished.

I am still pulling for that Bengals practice squad spot!!