Share All sharing options for: Louisville, Bridgewater Get High Marks In NCAA Football 2014

The release of EA Sports' NCAA Football video game has become sort of like the 4th of July for the modern college football fan. It's a summer rite of passage.

The 2014 edition of the game (I've never understood why the year in the title never corresponds with the one of the season that the game is based on) is set to be released on July 9, but impatient gamers will be happy to know that some details have already been leaked.

Among those details are the offensive, defensive and overall ratings for every FBS team.

As for our mighty Cardinals, EA Sports has the Louisville offense as a 93, the defense as an 88, and the overall team as a 90. That puts U of L behind 18 teams: Alabama, Clemson, Florida State, Georgia, LSU, Michigan, Michigan State, North Carolina (OK), Notre Dame, Oklahoma State, Oklahoma, Oregon, Stanford, Texas, Texas A&M, USC, Virginia Tech and Washington (double OK).

The top 15 likenesses of players in the game have also been unveiled, and Teddy Bridgewater checks in at No. 8. 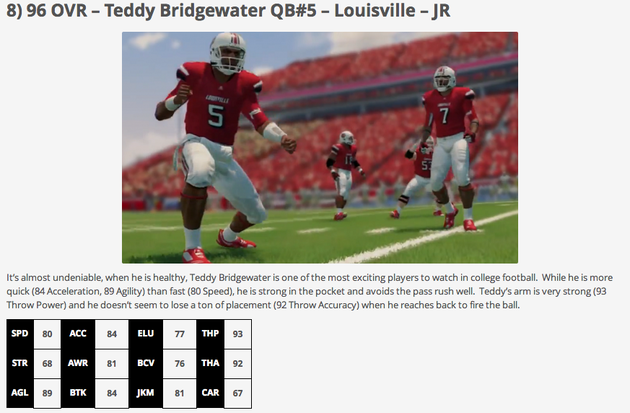 Bridgewater has the most accurate arm in the game, but his speed is a full 11 points lower than Texas A&M's Johnny Manziel. We should probably riot.

I haven't purchased a video game since the year Jared Zabransky was on the cover of this game, but I definitely won't knock any of you who pick this bad boy up. All I ask is that you don't upload any of your highlights onto YouTube. Nobody wants to see them, and it makes finding highlight videos of actual football next to impossible during July and August.