Louisville's quest for a national championship at the College World Series will begin Saturday against Indiana at 8 p.m. ET. The game will be televised on ESPN.

Regardless of their outcome in game one, the Cards will take the field again on Monday.

Louisville already picked up its first win of the College World Series on Monday morning when they won the coin toss for the right to be the home team against the Hoosiers on Saturday.

Here's the full bracket for U of L's pod, which is finalized now that No. 3 seed Oregon State has taken care of Kansas State (Times below are Central): 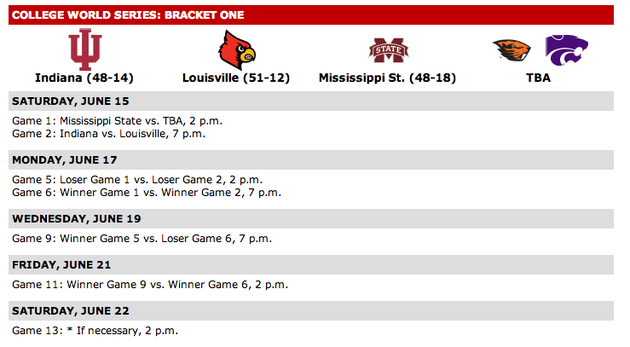 The three-game championship series between the winners of pod one and pod two will be played between June 24-26.

Even if you can't make it to Omaha, the chance for a cookout/party to watch Louisville play in the College World Series on a June Saturday night is a pretty good deal.

This is going to be a lot of fun.