George Katchak holding it down for CC at the USA Pond Hockey National Championships in Eagle River, Wisconsin.

Mel Kiper's first big board for the 2014 NFL Draft is out, and young Theodore Bridgewater finds himself as the No. 2 prospect in all the land.

He's not a finished product, but that's what should excite evaluators about Bridgewater. Bridgewater never looks overwhelmed, and comfortably works his eyes across the field. When he sees a target -- or more likely, a receiver who will come open -- he has a quick release, plenty of arm strength and good ball placement. He has a chance to have a huge year.

South Carolina's Jadeveon Clowney is the only player rated higher than The Ted.

The one guy in the sports world who seems to not be on the Teddy Bridgewater bandwagon is Stephen A. Smith, who said repeatedly on ESPN today that he thought Bridgewater was overrated and not the NFL prospect that Heisman winner Johnny Manziel is.

This is sort of a Digger Phelps picking against Rick Pitino situation; I don't hate it.

Ian Klarer back with some artistic glory for your eyes, brains and hands. Not your ears, though. 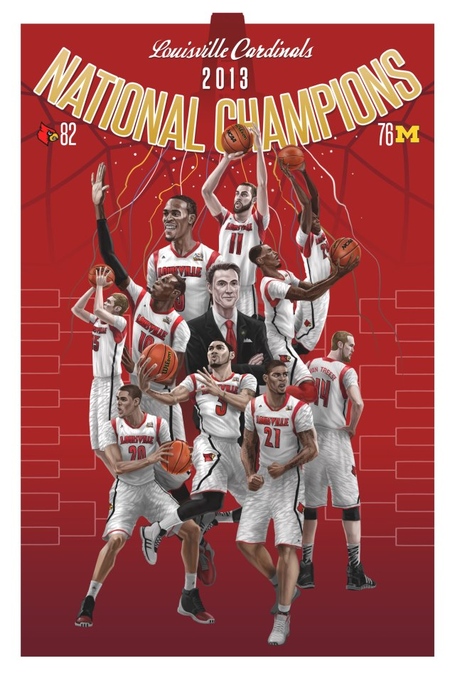 Congrats to Cardinals Shoni Schimmel, Sara Hammond and Bria Smith, who are among the 31 athletes who have accepted invitationsto participate in the 2013 USA Basketball Women's World University Games Team trials. Trials will take place May 16-19 at the U.S. Olympic Training Center (USOTC) in Colorado Springs, Colo., and the USA Basketball Junior National Team Committee issued the invitations.

The latest early season college football top 25 from CBS features the mighty Cardinals of Louisville checking in at No. 10.

Let's see, how to describe Louisville's last few months. How about, fantastic? AD Tom Jurich got the Cardinals into the ACC in November. Louisville then won the Big East and embarrassed Florida in the Sugar Bowl. That good enough for ya? Quarterback Teddy Bridgewater leads a group of 16 starters. This is definitely a top 10 program on the rise with Charlie Strong in place for the foreseeable future.

The ladies were also on the diamond today, dominating Syracuse 12-3 in the first round of the Big East Tournament. Apparently they're enjoying Tampa.

We have officially turned our tour bus into a dance club.

The Cards will play the winner of South Florida/Providence tomorrow night at 6:30 in the semifinals.

As pointed out by GoCardinals, this now exists. 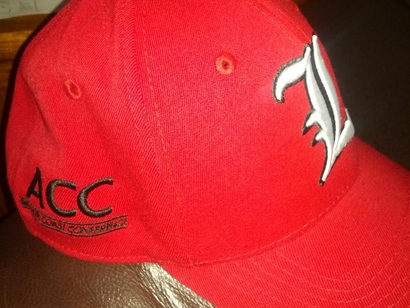 I've said it before and I'll say it again, for the next nine months I'm going to be the biggest AAC supporter you know. If I'm at a restaurant and I see that SMU is beating Creighton by three in the first half, I will be starting a one-man "AAC" chant. Am I going to stop after 10 seconds if no one else joins in? I think you know the answer to that.

In terms of receptions, Eli Rogers will be the second-leading returning receiver in The American this fall.

By now, you've probably heard that Rick Pitino and friends caught an 80-pound marlin during his debut marlin fishing excursion on Wednesday, but if you hadn't... 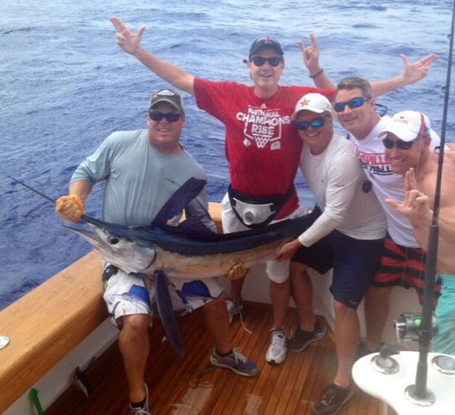 CBS' initial BCS projections for next season have Louisville squaring off against Texas in the Fiesta Bowl. Might as well play in them all.

The latest NBA mock draft from Draft Express has Gorgui Dieng going to the Milwaukee Bucks at pick 15. Other mock drafts floating around have Gorgs going as high as No. 12 and as low as No. 22. The next few weeks are going to be big for him.

Speaking of the Derby, the CCBM chose to do it in style this year, despite the rain. It also took a friend. 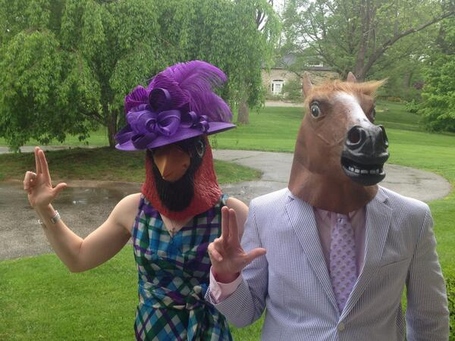 A belated happy birthday to Sir Adam Lefkoe. Come out to Tin Roof on Friday and buy him a drink. He'll be there from 11 a.m. until noon on Saturday.

Good read on the relationship between F. Scott Fitzgerald, The Great Gatsby and Louisville. Yes, I'm going to see the movie. Yes, I'm already planning on it making me upset.

A nice read from Jody Demling on Henry Bacon, a member of the 1972 Final Four team who is about to graduate from U of L.

The Louisville baseball team's regular season-ending series with Pitt next weekend could decide who wins the regular season title in the Big East.

And finally, some words of wisdom from Russ Smith:

I was walking alongside of a blind woman just now . It amazes me how much I complain .. She was perfectly happy on this beautiful day ..

Please note the time stamp. Maybe he's on the coast.