Share All sharing options for: Louisville Baseball Rallies To Top No. 14 Indiana

The third time was the charm for the Lou---I'm sorry, that's so lame. Take two...take two.

The Louisville baseball team avenged two prior defeats to Indiana by topping the 14th-ranked Hoosiers 4-3 at Jim Patterson Stadium on Wednesday night.

The victory came in front of in front of 3,530 fans, many of whom were wearing pink in accordance with U of L's Cancer Awareness Night. Both teams, as well as the umpires, also wore pink to support the cause. 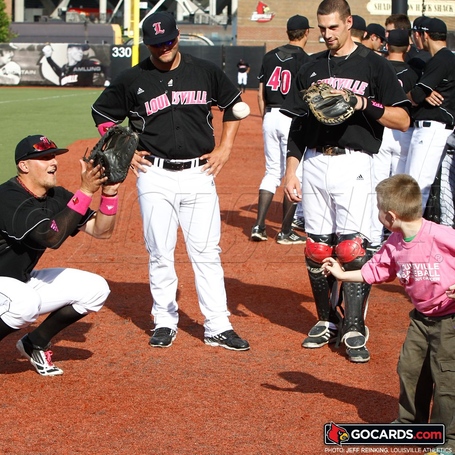 Playing a second game in as many nights, a rarity for work weeks during conference play, U of L used seven different pitchers to hold Indiana to just four hits. Still, the Cards trailed 3-1 before a two-run double by Sutton Whiting evened the score in the bottom of the 7th.

Whiting's big knock set the stage for Louisville to win the game in dramatic fashion two innings later, which they did when Danny Rosenblaum drove in Cole Sturgeon with a sacrifice fly.

The win was the ninth straight for U of L, which currently sits alone in third place in the Big East heading into this weekend's three-game series at Connecticut. The Cards trail first-place South Florida and Pittsburgh by one game. Louisville wraps up the regular season with a three-game set at home against the Panthers in two weekends.