Frazier Museum employee Mick Sullivan says the Wildcats aren't the droids we were looking for.

If you haven't yet, be sure to check out Dana O'Neil's one-on-one piece with Kevin Ware

So far, Ware's mental outlook is good -- "I feel like as long as I don't see the video [replaying the injury], I'll be fine," he said -- but he's not kidding himself. Ask any athlete who has been through a long rehab and they will tell you that it is a lonely path, filled with frustrating steps backward and equally difficult plateaus.

Ware has been the toast of the town since his injury, appearing on countless national TV programs, feted by fans and even scoring an invite to the prestigious White House Correspondents' Dinner.

But soon enough, it will be just him and Hina in a room working to get better.

"I'm sure the hard days are coming,'' he said. "I know they are. But I think I'm a lot stronger now to handle them.''

Where Andrew Wiggins chooses to go to school has become the biggest offseason topic in college basketball and with good reason, the kid is going to be the best high school player since the advent of the "one-and-done" rule. While all the smart money is on Wiggins landing at Lexington Basketball Academy, his host mother in Huntington says if it were up to her, he'd wind up playing for Rick Pitino.

Amid constant speculation about whether Andrew Wiggins will choose Kentucky, Kansas, North Carolina or Florida State, what if he shocked the world and picked Louisville?

Well, calm down, because the nation's top basketball recruit is almost certainly not going to pick Louisville. But if the woman who has put a roof over his head for the past two years had any say, she would point Wiggins toward the Cardinals.

"If it was my choice, I'd say he should go to Louisville," said Lesley Thomas, who has been Wiggins' host mom in West Virginia since he enrolled at Huntington Prep. "Yes, I would have, because I love Coach Pitino's program."

Thomas was also the host mom for The Gorgster.

The Louisville baseball team has bounced back from its first three-game losing streak to win eight straight. The Cards swept Villanova over the weekend and topped Eastern Kentucky 4-0 today.

The run has gotten U of L back into the top 10 of two of the six major college baseball polls.

As for the ladies of the softball diamond, U of L dropped its season finale at Notre Dame over the weekend, which wound up being a de facto regular season title game. As a result, the Cards head into this week's Big East Tournament as the three seed. They'll open play in Tampa on Thursday against Syracuse.

Ron Dugans tweeted out the following picture today, which shows ESPN the Magazine giving even more preseason love to Charlie Strong and the Cards. 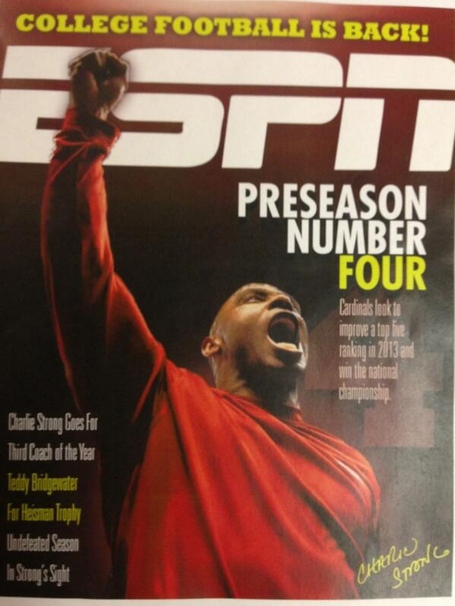 But, but, but all they did was beat a lazy Florida team in an exhibition game. Every time Louisville gets really good at football it reminds me how much perception trumps reality for a large chunk of the sports' fan base.

ESPN isn't the only network upsetting traditional college football powers by placing Louisville in its post-spring top 10. SI joined the party on Tuesday.

Spring star: OT Abraham GarciaThe Cardinals bring back almost everyone from the team that won the Big East and crushed Florida in the Sugar Bowl last season, but when spring began, depth looked bleak at tailback. Jeremy Wright, last year's leading rusher, isn't enrolled in classes. Senorise Perry is still recovering from a torn ACL suffered last season. But Dominique Brown, who missed all of last season with a knee injury, returned at full strength this spring and appears ready to carry the load. Garcia, a sophomore offensive tackle from Fort Lauderdale, Fla., is listed at 352 pounds, but when I met him while covering his 7-on-7 team in 2010, he wasn't a biscuit over 330.

There's a lot going on in this picture, including, but not limited to, Hakeem Smith and Honey Mustard posing with what appears to be an intoxicated Aaron Rodgers, Clay Matthews giving one of the creepiest photobombs of all-time, and someone who looks an awful lot like Troy Aikman lurking in the background. 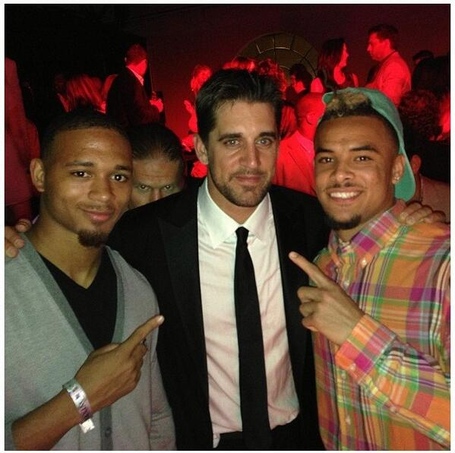 Athlon says Louisville is one of 10 teams with the potential to dethrone national champion Alabama this season.

With an easy schedule and one of the nation's top quarterbacks under center, Louisville could have the most favorable path to a 12-0 mark in 2013. Quarterback Teddy Bridgewater threw for 3,718 yards and 27 scores last season and had a standout performance in the Sugar Bowl win over Florida (266 yards, two touchdowns). Bridgewater will be throwing to one of the nation's top receiving corps, but the offensive line must replace two key starters, including center Mario Benavides. The Cardinals ranked 23rd nationally in total defense last season but need to get tougher against the run after allowing 148 yards on the ground per game in 2012. Most of the defense returns intact, but cornerback Adrian Bushell is a big loss. Louisville doesn't have a strong non-conference schedule, so winning and looking impressive in Big East play is a must.

That ACC Grant of Rights you've heard so much about has officially been signed.

It's worth nothing yet again that this has been a tremendous year for U of L both on and off the athletics field. 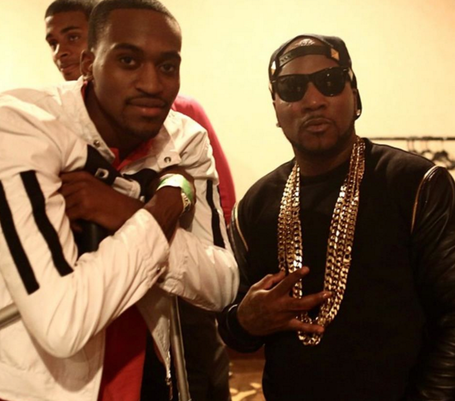 Louisville Sports Live has a look at how the ACC's bowl tie ins are shaping up.

According to Quentin Snider's dad on Twitter (2013, y'all), the class of '14 U of L commit has been invited to the prestigious LeBron James camp this summer.

And finally, we've all got like 14 hours to get one another something appropriately spectacular for tomorrow's one month anniversary celebration. Let's do this right.