There were some great ones this year. Let's vote on the best.

As you may have heard, the Louisville men's basketball team, football team and women's basketball team all won a lot of games, many of them important games, this season. And after most of these games, there was lots of hugging. And it wouldn't be the Chron (don't call it that) without a poll to determine which of these hugs was The Best Hug. Your nominees are:

Rick Pitino and Tom Jurich after Duke game. For some reason, this one really got me. Watch the whole video obviously but the hug occurs at the 7:47 mark. I've seen other video of this somewhere but can't find it tonight.

Ran to my boy hugged him for ever and cried literally . I never felt this way about a teammate. It's bigger than that we are a family!

Chane and Trez hugging after winning the national championship:

Same video a few minutes later, this still shot captures Pitino's joy as he sees his son for the first time after he wins the national championship: 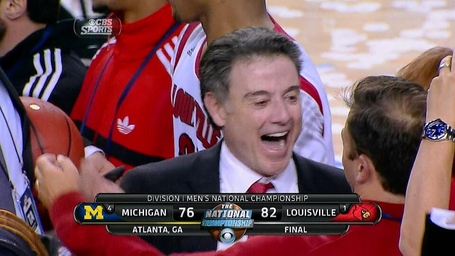 So there you have it. I'm sure I'm forgetting other awesome hugs that occurred, and if there are enough, the winner of this will go against the best of whatever else is out there.

So much celebratory hugging. So much emotion.