Study Says Louisville Has The Best Fans In College Basketball

Share All sharing options for: Study Says Louisville Has The Best Fans In College Basketball

Already home to the reigning national champions, Louisville fans can now lay claim to another title they've already always assumed: Best fans in college basketball. At least according to a project by the folks at Emory Sports Marketing Analytics.

For our College Basketball Fan Equity analysis we use a "Revenue Premium" method. The intuition of this approach is that fan base quality is reflected in a school's men's basketball revenue relative to the team's performance. To accomplish our analysis, we use a statistical model that predicts team revenues as a function of the team's performance, as measured by winning rates and post season success. The key insight is that when a team achieves revenues that greatly exceed what would be expected based on team performance, it is an indication of significant brand equity. The analysis therefore avoids bandwagon effects and gets at the core loyal fan bases.

And here are the results: 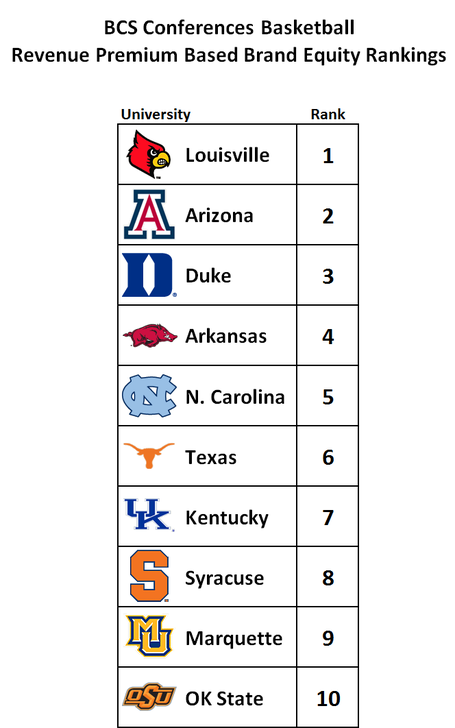 Number one on the list also happens to be the most recent NCAA champion Louisville (note these ranking were computed prior to this past tournament). Louisville scores so well because they have a great tradition, and play in a decent sized metropolitan area that does not have any pro teams. The list does include many of the usual suspects such as Arizona, Duke and North Carolina. How does this relate to recruiting? Simple, strong fan bases equate to strong and high profile programs. If an athlete wants exposure and opportunities to play on a big stage, then it makes sense to seek out a high brand equity program.

Ok, but if you factor "misspelled homophobic tweets to 18-year-olds" into the equation, then the results are going to be TOTALLY different. Just more evidence of anti-UK bias.

Obviously this is sort of a silly exercise, but I don't think that's any reason to keep us from putting the results on a shirt. I also think "No. 1 Fan" coffee mugs are called for here, with a detailed explanation in fine print on the bottom to provide some legitimacy. And when we see each other public, I think a warm "hey, No. 1 fan" greeting is more than appropriate. It's a multi-layered salutation at this point.

See you out there, fellow No. 1 fans.