In the final year of the Big East conference, Louisville is now assured of winning league titles in football, men's basketball and baseball.

The last of those championships was locked up Friday night when the Cardinal baseball team throttled Pitt 12-4 in front of 3,574 fans at Jim Patterson Stadium. The win guaranteed Louisville of at least a share of the Big East's regular season title and the No. 1 seed in next week's conference tournament. U of L can win the title outright by wrapping up a sweep of the Panthers Saturday at noon (the game will be carried on ESPNU).

"I'm really happy for these guys to at least win a share of the regular-season Big East championship," coach Dan McDonnell told the C-J. "I'm really proud of them, and we've played great baseball the last three weeks."

U of L got seven strong innings from ace Jeff Thompson, who struck out seven and allowed just three hits. The win moved Thompson's record for the year to a sparkling 10-1.

The story of the night for Louisville, however, was offense. The Cards touched Pitt's Matt Wotherspoon (9-2) for 10 runs (all earned) in 4.2 innings. Designated hitter Jeff Gardner did the most damage, belting a pair of home runs and driving in a total of four runs. The top of the order also got the job done, as Adam Engel and Nick Ratajczak each scratched a pair of hits and combined for five RBI. 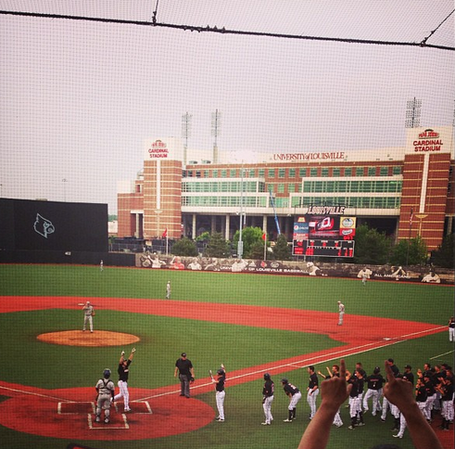 Things are certainly clicking at the right time for Dan McDonnell's bunch. This could be a fun few weeks of baseball.