It's already been one hell of a season for U of L athletics, and there's nothing that could happen at this point which could change that.

Still, it could get even better, and it's Ok to get a little greedy when you're already up big...at least with sports...and when you're only a fan with no actual control over the games.

The Louisville baseball team took a giant step towards cashing in on that greed Thursday night by knocking off Pittsburgh 5-2 at Jim Patterson Stadium. The win leaves the Cardinals and Panthers tied atop the Big East standings with just Friday night's and Saturday afternoon's games left to play. 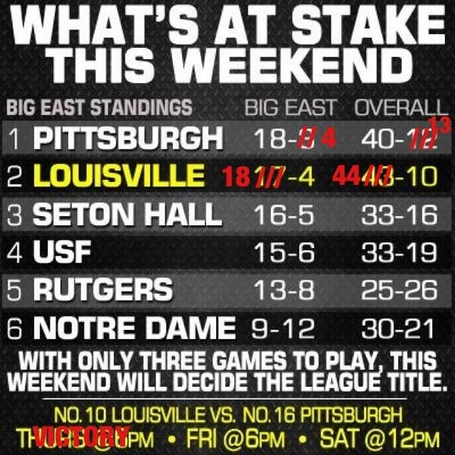 U of L fell behind 1-0 in the series opener before reeling off five unanswered runs to support winning pitcher Chad Green (9-2), who scattered eight hits but allowed no runs over five innings. Ty Young was the star of the night at the dish, going 2-for-3 and driving in three runs. Bat flipper extraordinaire Jeff Gardner also belted his third home in the month of May.

Friday night's game will feature two of the better pitchers in the Big East, as Louisville's Jeff Thompson (9-1, 1.94 ERA) will toe the rubber against Pitt righty Matt Wotherspoon (9-1, 3.0 5ERA).

It's Senior Night at Jim Patterson, and the first 500 fans in the stadium will receive a free team photo. There will also be $1 Budweiser and Pepsi products available for purchase...and consumption.

I'll see you all at the park.

UPDATE: Check out the Cards pulling off the ever-rare 1-2-3 putout in the 7th inning.