My View Of The Duke Game

Share All sharing options for: My View Of The Duke Game

So I didn't really talk about this at the time, but as part of reliving March and April, one of the more complex set of memories is the Duke game. Not just because of what happened, but because until that moment it was the best, most surreal game watching experience I had ever had. Oh, and now I will forever be enshrined in VillenHD and CrumsRevenge videos. Here we go.

I have some ticket connections but they are mostly good for when people I know with good tickets don't want to go to the games. I have season tickets in the upper level, but I buy those through someone. I have little to no "points" and I think I'd probably have to give my real name if I ever applied for a press pass (although one with CardsFan922 on it would be pretty awesome) and I doubt I'd get one either way. I don't mind spending a little money on stubhub to ensure I get into the arena, and avoid outside, game-day scalping at all costs. But I'm not springing for the really expensive tickets. Honestly, I prefer sitting by myself at games, and my wife usually would prefer I sit by myself if she had someone more reasonable to sit with, but usually she is stuck with me. All of this is to say, my tickets for Friday night's game were really good, but not great: sideline view, but up high and a little behind the basket: 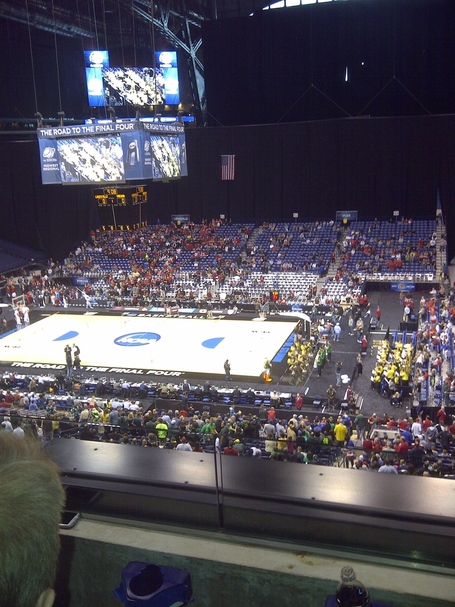 My wife went to that game, but we knew if we won Sunday's game would be Easter. And that there was no way she was going, and no way I wasn't going. I was still able to do some family stuff, I would just have to leave early. No big deal. My brother would go with me to Sunday's game, and we were pumped.

So late Saturday night, I get a text...yadda yadda yadda friend of a friend who I also know and my brother also knows really well (because Louisville is a small town) has 2 seats "4 rows behind the bench." At a very, very reasonable price, especially after I unloaded my seats for face value to someone else, and didn't have to pay stubhub fees. Now, the person who told me about the seat location has a history of not being precise on such things, so I did not really expect 4 rows behind the bench. But I figured they would be an upgrade.

And then we got there: 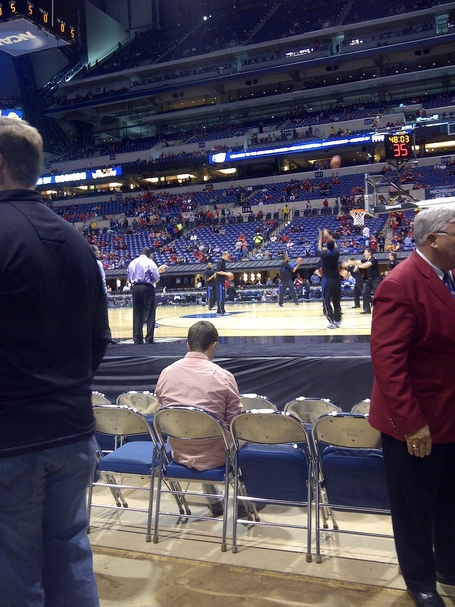 Ya. So that's the UofL bench, two rows of seats, a walkway and then we were in the second row. We got there about an hour early, and basically just stood there in awe the entire time. I think I may have even offered the guys we were with more money beyond what I paid. Big Russ walked by, came over and talked to us. Told us the team was locked in, everyone's health was good, everyone was ready. Jurich stood about 5 feet away, alone, the whole time, but none of us approached him. Charlie Strong, the Pitino family a section over, walk on players who didn't dress (I think it was Slime and Mangok?), all passed by us over and over. It was surreal, and awesome and the most amazing thing ever.

Here is our team warming up: 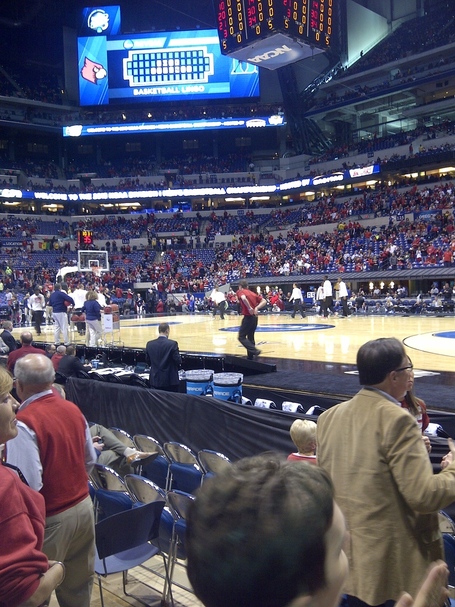 Here they are getting ready for the starting lineups: 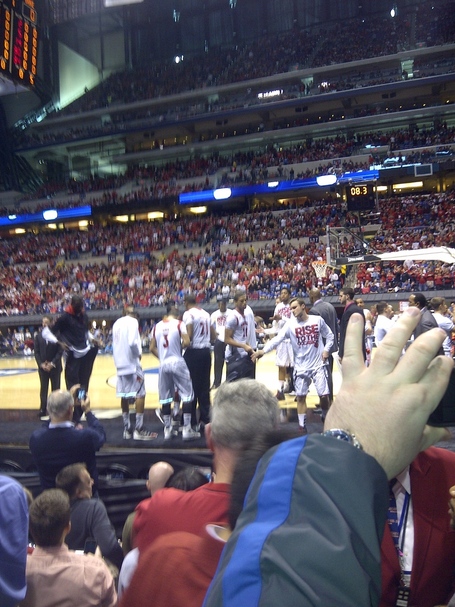 So basically during the game, I'm trying to be on my best behavior, not yell at the refs like I normally do, not yell "EAT HIM UP HENDO" everytime Hendo guards someone (did this in second half though), etc. (Note: I never, ever yell bad things at our players or opposing players, and therefore all of my energy goes towards the refs. They are the only adults out there. One time I wanted to yell at Jamie Dixon that he had ruined college basketball but I was with someone who would never invite me back if I did, so I thought better of it.)

Anyway, trying to follow the action from a vantage point I'm not familiar with is tough, as was trying to also keep an eye on the bench to see the little things you normally don't see during the games, and sorta follow Twitter although that was too much, and hey look there's Charlie Strong. There was a lot going on.

Then, Kevin Ware. I saw Ware closing out really fast, followed the ball as it went in and then looked back and saw Pitino waiving his arms. I looked down and saw bone. I spun around as fast as I could and put my head in my hands and tweeted something along the lines of "that's the worst thing I've ever seen." It was so quiet, I thought I maybe heard moaning, but I wasn't sure. I did not turn around. Once he was covered up, I maybe turned around for a split second and vaguely remember seeing our guys on the court. But all of the video of guys crying, people throwing up, etc., I did not see any of that even though I was so close. I don't remember everything.

So after that, getting to halftime was the longest 6 minutes of the season. You could just feel the energy sucked out. Ball goes in? Good, but really let's not get that excited because does it even matter?. Duke scores? Whatever. Hard to care. Couldn't help but feeling, hey, it's just a game with a ball. I had gone from enjoying the best seats I had ever experienced in the biggest game of the season, to...I don't even know how to describe how all of us were feeling, because I think everyone around me felt the same way. And everyone watching at home.

At halftime, I was this close to Goodman interviewing Richard, but really wasn't in the mood to joke about prizes or Gorgui or twitter or anything: 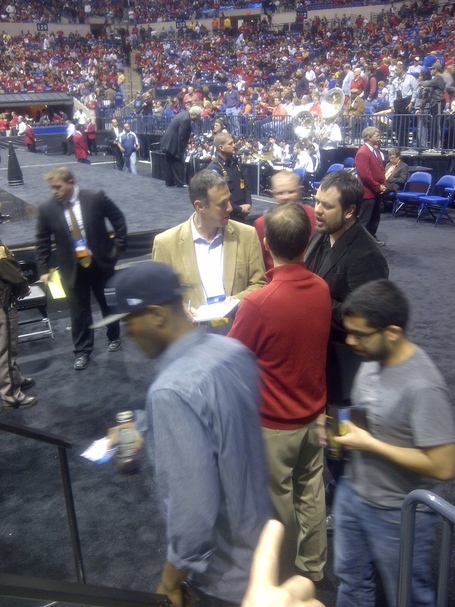 The second half, I mean, I don't even know. It was just as surreal as everything else was that day. Because of the vantage point and the emotional exhaustion and just the overwhelming experience overall, I did not really understand or appreciate the lead we were building. When Duke tied it, and then either Russ or Siva got his 3rd foul, I was close enough to see an assistant tell Pitino it was a guard's 3rd foul, see him look to spot on bench where Kevin Ware should have been, realize why he wasn't there, then look down and mutter some profanities to himself. It was a small moment and ultimately meaningless in the outcome, but it is one I will never forget. Then, Hendo.

At some point I looked up and it was a double digit lead. And then 12 points, then like 16, and that can't be right? This is Duke in the Elite 8? We have made like one 3 pointer. What is happening here? At one point, Duke called timeout and Chane looked up into the crowd and put both hands up into the air and made the #1 sign, nodding his head and smiling. My brother swore Chane was looking directly at him, and started nodding only when my brother started nodding.

Then at some point late in the game, you just sorta realized what had just happened. The people cheering for Duke right around us left. It was just UofL fans and it was a weird euphoria and dread and relief and all those feelings. Then I noticed Chane doing something. Whose jersey is that? 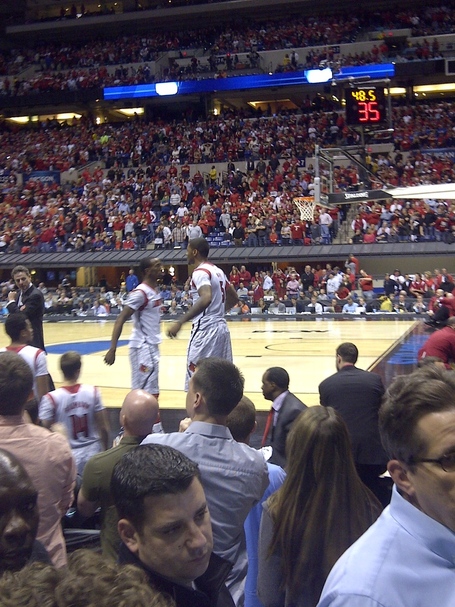 After the game we hung around for awhile. Didn't want to leave. The whole thing was....maybe this is why the Paul Rogers call at the end of the @CrumsRevenge video gets me every time.