I'm going to refrain from revealing the name of the sender in order to prevent them from becoming a social pariah, but the following picture was attached to a message which said: "Lydia and her dad are ACCited!!" Also, I'm really backlogged on these, so the excitement was slightly more relevant at the time. The joke is still equally inexcusable.

The big news of the day is still that Andrew Wiggins is headed to Kansas, a move which makes what was already going to be a an exciting year of college hoops that much more intriguing.

We've now got a national champion bringing back the bulk of its scoring, a team with perhaps the greatest recruiting classes of all-time, another team with one of the greatest recruits of all-time, and then established stars like Marcus Smart, Adreian Payne and Doug McDermott who surprised a lot of folks (or everyone, in Smart's case) by spurning the NBA for another year.

Next year's going to be great.

As you might have expected, searching Wiggins' mentions on Twitter between about noon and 3 p.m. was enough to make you almost lose complete faith in humanity. BBN had its fair share of morons, but UNC fans were also far from innocent in all of this. I'm sure a couple of Florida State football fans also got lost and decided to throw a few homosexual slurs out there as well.

If you're reading this and you ever, EVER find yourself with a desire to spew hate in the direction of an 18-year-old who chose to play a sport somewhere other than the university you support, go for a run, take a nap, put out cigarettes on your arm, whatever, just do not do it. It makes all of us look bad. And I don't mean all of us Louisville fans, I mean all of us people.

All that said, I kind of want to organize a social media attack on a random, non-athlete who recently chose to attend a state school for financial and locational purposes. Just bombard Timmy Jenkins in Des Moines for choosing to accept a partial scholarship to Northern Iowa instead of coming to U of L. I bet it would actually make him feel pretty special. After the confusion.

On another Wiggins note (last one, I promise), earlier this week UK signee Aaron Harrison posted a Vine video in which a friend of his said "F--k Andrew Wiggins." He quick;y deleted it, but Wiggins still saw it, and as you might expect, wasn't exactly thrilled.

Also, I was told by source that Wiggins saw the much-discussed and now-deleted vine video associated w/Harrison twins, & he didn't like it.

Outside of the obvious reasons, Louisville fans should be excited that Wiggins isn't going to be Kentucky because he seems like a pretty hard kid to root against. I don't think you can say the same for a handful of the other youngsters who will be wearing blue this season. I'd expect this group to be much more like the Cousins/Wall team than the Davis/Gichrist one.

>We're not even to the summer and we've already seen Andrew Harrison post this video, say he "hates Louisville," "proclaim" a national championship and claim that he would beat Michael Jordan in a game of 1-on-1...in Jordan's prime. Then there's Marcus Lee and Julius Randle saying their goal is an undefeated season and Dakari Johnson saying he's looking forward to being hated.

Whenever I get overly fed up with UK fans during periods of Wildcat success, I try and tell myself that I should be happy for the players. Catholic guilt over feelings of Schadenfreude probably won't be an issue this season.

Very cool picture of a dusk rainbow over PJCS from Brian Strunk:

Congratulations to former U of L assistant basketball coach Mark Lieberman, who has been named head coach at Floyd Central (Ind.) High School.

"He went to the beer cooler and got him a couple of beers," Ofc. Huffman said. "He ate six steaks, a couple of pounds of shrimp, a dinner salad and a birthday cake...and he drank a case of soft drinks."

Louisville native Jon Bois explores whether or not the actions of this Mt Washington man amount to a sport.

Mel Kiper has Calvin Pryor listed as one of the "next up" in his rankings of the top five safeties for next spring's NFL Draft.

This would seem to be a positive development.

No. 3 Louisville (35-5, won NCAA title): Losing the veteran leadership of Peyton Siva and the talent of Gorgui Dieng hurts, but the Cardinals will return quite a bit from a national championship-winning roster. Leading scorer and eccentric personality Russ Smith, who averaged 22.3 points a game in the NCAA tournament, passed up the pros and will be unquestionably one of the best players in the country this season. Throw in Chane Behanan, Final Four MVP Luke Hancock, Wayne Blackshear and Montrezl Harrell, and this team has the pieces it needs to return to the Final Four for the third consecutive season.

A good story from the C-J on those who bravely led Louisville's desegregation efforts 50 years ago.

ESPN wonders if Kentucky should keep Louisville on its football schedule.

The previous topic is also one we tackled on last night's Two Man Game, which you can listen to here. We also talked with Jody Demling about Louisville's new recruits, and which quarterback has been a bit of a disappointment so far (hint: it's not Teddy).

The CCBM donning some Bird Game clothing and being photobombed by Peyton Siva. 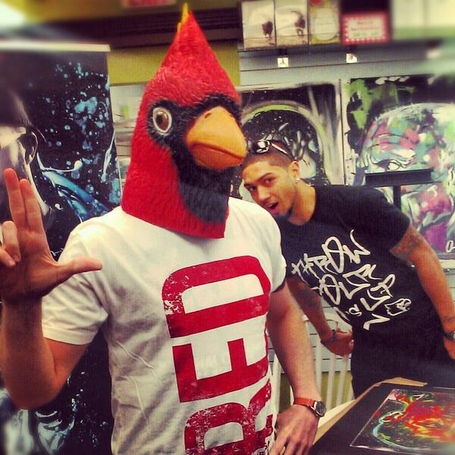 And serving as a scarecrow. 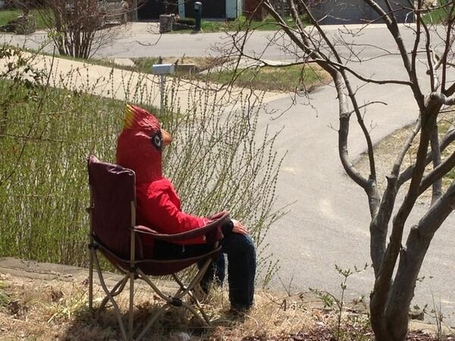 The U of L women's basketball team will be resuming its old series with Western Kentucky.

And finally, ESPN says Chane Behanan is the key returnee for the Cardinals next season, and also looks at Rick Pitino's incoming freshmen.