That's Frankie Underwood celebrating a national title and making it through nine days in the NICU after birth. Lookin' splendid.

Rick Pitino said he was going back to work after the Derby, and he meant it. Pitino will not be traveling to Baltimore this weekend to watch Goldencents run in the Preakness, although Richard might be making the trip.

According to MyCentralJersey.com, U of L associate athletic director Julie Hermann is one of the finalists to take over as the new athletic director at Rutgers. It's about time the Jurich AD tree started getting some Pitino coaching tree-esque love.

Here's the junior highlight video of Hialeah QB Alin Edouard, who reporters in the area are saying might be switching his commitment from Miami to Louisville in the very near future.

Speaking of Edouard, the Miami Herald has more information on his situation and the likelihood of him winding up at U of L.

Edouard, who committed to UM in February and was offered a scholarship by former UM assistant Mario Cristobal (now at Alabama), said new UM offensive coordinator James Coley communicated with him for the first time Monday - via a private message on Facebook.

"I had no previous communication with Coach Coley at all, said Edouard, rated by Rivals as the 16th best dual-threat quarterback. "He asked me on Facebook if I trusted him and I said, ‘Yeah, I trust you but I don't want to change my position [to receiver or anything else].'

"I'm 6-1½ and I don't want to take the chance of playing receiver. He was like, ‘Running routes isn't even in the picture, so don't even think about that.'

"But I'm still worried - not about the quarterback competition, but about them possibly changing my position. What can I say? I saw it coming, to tell you the truth. UM is not the same to me as it was before."

Edouard completed 64 of 132 passes for 926 yards and nine touchdowns, with nine interceptions as a junior last season. He ran for 559 yards and seven touchdowns.

Edouard is good friends with former Miami Northwestern quarterback Teddy Bridgewater, going into his junior season at Louisville. Bridgewater was committed to UM before former coach Randy Shannon left, then shifted his allegiance to Louisville. Edouard said he has talked to at least two Louisville coaches, including head coach Charlie Strong, and is very interested in the Cardinals.

According to 24/7 Sports, Louisville now has the ninth-best 2014 recruiting class.

My fiancé, Johanne Lewis, and I bought CC bird masks in a drunken impulse buy during the Oregon game. We went to the final four as well which was an incredible experience! She's currently at Palmer Station, Antarctica doing research on bloodless fish and we though it would be damned entertaining for her to bring down her bird mask. This is one of the pictures from her "photo shoot" down there. It got quite a few chuckles and weird looks at the station but the mask was a hit! They have a costume closet at the station and they loved the mask so much that they wanted to keep it; we happily obliged. We considered it Card Chronicle's contribution to science. The CCBM will now be forever be etched in the annals of Antarctic research. 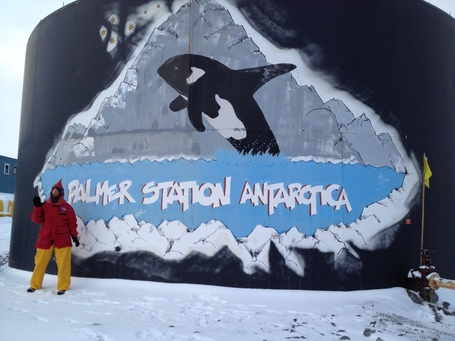 Someone get Disney on the phone. I smell a new Morgan Freeman-voiced documentary.

The National Journal is running a week-long series on the city of Louisville, beginning with a Q&A with Mayor Greg Fischer titled, "The City That Never Went Bust.

And while the changes to the Texas offense moving forward under new playcaller Major Applewhite may often be thought to de-emphasize the position, several formations this spring used two running backs in the backfield, a perfect fit for the hybrid Gresham, who is equally adept at churning out long gains with his tackle-breaking ability and delivering hits as a lead blocker.

Both 247Sports and ESPN are reporting that Ole Miss is in a strong position to land Gresham, as he is friend with 2015 Ole Miss commit Rawleigh Williams, another running back prospect, and several other players set to head to Oxford. A native of Kentucky, Gresham also grew up a Louisville fan, so the Cardinals could factor into the mix as his recruitment progresses. He also holds a number of big-time offers now, including Alabama, Florida State, and Ohio State, among others.

New U of L WR commit George Rushing says that Louisville was his "dream offer." 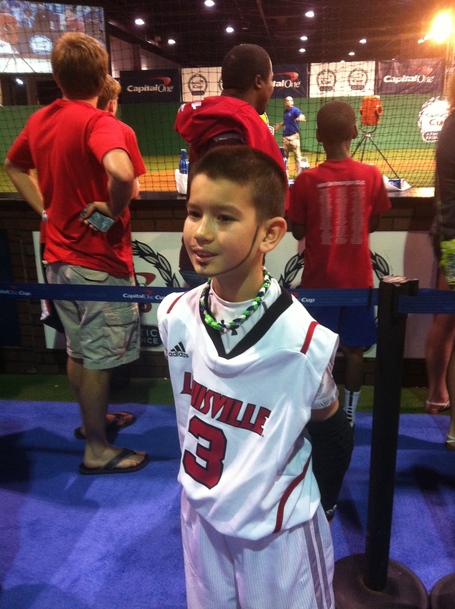 I'm eagerly anticipating the day a Mini-CardsFan922 pops up.

Former U of L recruit Deuce Bello asked Baylor for his release today. My guess is he won't be hearing from anyone on the Cardinal staff.

Here's a worthwhile campaign that fans of the music scene in Louisville may be interested in supporting.

CCBM living the high-life (pun intended), staring down at some F18s. 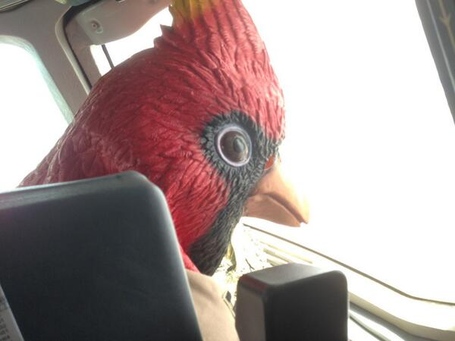 I know as much as anyone about who Andrew Wiggins is going to sign with tomorrow, so allow me to make my official prediction: Not DePaul.

Heading into the final week of the regular season, Baseball America has Louisville at No. 12 in its latest top 25 rankings.

Louisville allowed just one run in a three-game road sweep at UConn to run its winning streak to 12 games (tied for the longest active streak in the nation) and remain a game behind Pittsburgh in the Big East, heading into next weekend's showdown against the Panthers in Louisville. The Cardinals threw shutouts in both games of Saturday's doubleheader, giving them four shutouts during a seven-game span and 10 shutouts this season. Chad Green (8 IP, 3 H, 0 R, 2 BB, 6 K) improved to 8-2 in the opener, and Jeff Gardner and Cole Sturgeon combined for five hits and five RBIs. Gardner (2-for-4, 4 RBI, HR) led the offense again in the second game, helping Jeff Thompson (8 IP, 4 H, 0 R, 1 BB, 7 K) improve to 9-1. The Cards scored two runs in the seventh Sunday to help Dace Kime (6.2 IP, 4 H, 1 ER, 0 BB, 9 K) improve to 5-1, earning coach Dan McDonnell his 300th career victory. After making 11 straight relief appearances, Kime has made three starts in 13 days, winning all of them.

And finally, I'm back on the radio talking about radio stuff tonight from 8-10 on ESPN 680. Listen live or any time on ESPNLouisville.com.