Share All sharing options for: Hancock Plays Hero For Louisville Against Michigan

ATLANTA -- The groans that echoed throughout the KFC Yum! Center in November weren't Luke Hancock's fault, but in hindsight, it's hard to blame the Louisville fans who were making them either.

Hancock, an unheralded recruit out of high school, made the decision to transfer from George Mason to Louisville following head coach Jim Larranaga's move to Miami after the 2010-11 season. His respectable averages of 7.7 and 10.9 ppg in two seasons as a Patriot led most to believe that he could serve as a solid role player on a far more talented U of L team.

Expectations for Hancock remained reserved until the early part of the 2011-12 season that he was forced to sit out because of NCAA transfer rules. It was then that Rick Pitino made he conscious decision to raise the bar.

Similar comments followed for the next several months. Louisville fans well-versed in what they refer to as "Pitino-Speak" still allowed their head coach's comments to seep into their subconscious and drastically alter their expectations for Hancock's debut season as a Cardinal.

Even with the "Hancock hype" circulating throughout the city, Cardinal fans were surprised to hear the junior transfer named as a co-captain before the season. He would share the honor with Peyton Siva, a three-year starter who most expected to be the team's lone leader in his final year at U of L.

The "Captain Luke Hancock" who was going to make Louisville fans forget all about the graduated sharp-shooting duo of Kyle Kuric and Chris Smith did not show up when the season did. He attempted 29 three-pointers in U of L's first four games, and he made just four. He finally broke out of the slup with a 19-point performance against Missouri...and then failed to score a single point in the two games after.

Cardinal fans quickly took to the Internet to declare that Hancock "wasn't a Louisville caliber player." There were also a handful of instances at home games where the "oooos" from the crowd weren't shows of support in the form of a first-name cheer.

Hancock admitted that he was aware of the unrest, but downplayed its significance and vowed to not change his game. He appeared more comfortable in a reserve role and provided a solid lift off the bench for a Cardinal team that began to hit its stride once the second half of conference play rolled around.

The first indication that Hancock could wind up having a significant impact on any postseason success that Louisville might have came during the Cardinals' first game of March. U of L found itself in a dogfight with a Syracuse team that had defeated it at the Yum Center with a last-minute flurry a month earlier. Pitino's team had gone on to lose two more one-possession games over the succeeding three weeks, leading fans and analysts alike to wonder whether or not this was a team capable of performing when the lights were the brightest.

With Louisville and Syracuse dead-locked at 53 and less than a minute to play, the man Cardinal fans had wanted off the team just months earlier was the one with the ball in his hands. Hancock drilled a highly-contested three from the left corner, his fourth of the game, to put U of L up for good. "Cool Hand Luke," a nickname that would have been tossed around only ironically a few weeks earlier, was born.

Once the physical tools began to rear their head, the leadership qualities emerged too. The latter was never more evident than when sophomore guard Kevin Ware broke his right leg during the first half of Louisville's Elite 8 showdown with Duke. While the rest of his teammates understandably turned away from one of the most gruesome injuries the sports world has ever seen live, Hancock instinctively sprinted into action, grabbing Ware's hand and saying a quick prayer. 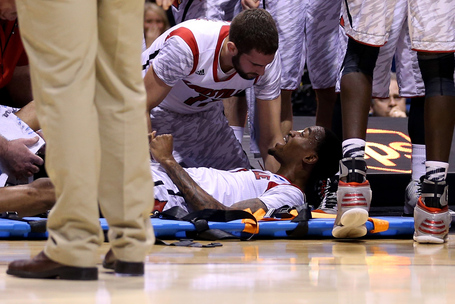 "Lord, watch over us and let Kevin be OK during this tough time. The Lord does everything for a reason, and He will get us through this."

Ware, who was attempting to fight off shock at the time, expressed days later just how much Hancock's actions allowed him to stay strong in front of the rest of his teammates.

"I really, really want to thank Luke," Ware said at a press conference three days later. "Because Luke jumped right on the scene like the captain that he is and just said a prayer for me. When he was saying that prayer what was going through my head was I'm either going to cry and my team is going to be devastated and we probably won't win this game or I'm going to just try to say some words to get us through."

All of this, of course, sets the stage for Monday night.

With his team unable to keep Michigan from hitting anything and everything in the first half, it was again Hancock - the man still bogged down with his fair share of haters - who rose to the occasion. He drilled four three-pointers in the final three minutes of the first half, almost single-handedly trimming a 12-point deficit to just one at the break. Though Michigan put more of a premium on defending Hancock in the second half, he still found a way to kill the Wolverines, most notably using his patented pump fake to draw a fourth foul on big man Mitch McGary.

When all was said and done, Luke Hancock, the man who "wasn't good enough to play at Louisville," had matched a career-high with 22 points and become the first non-starter to ever be named the Most Outstanding Player of a Final Four. Making the night that much better was the fact that Hancock was able to play in front of his father, who is battling an undisclosed illness serious enough that he wasn't expected to make the trip to Atlanta.

"I'm so excited for this team to be in this situation. It's been a long road," Hancock said after the game. "There's really no way to describe how I feel that my dad was here. It's hard to put into words. I'm so excited that he was here, it just means a lot."

From "not Louisville caliber" to the most valuable player on the Cardinals' first national title team in 27 years. A long road indeed.

A disinterested cab driver may have summed up the night better than I ever could: "I like the white guy. I don't know his name, but he's good."