Lucas Stoller and Mike "Buoy" Brown showcasing the primary benefit (and a mandatory pit stop) of any bachelor party in Chicago. Congrats to Shane Monaghan on his pending nuptials.

Will Teddy Bridgewater be the first player selected in the NFL Draft 12 months from now? More and more early mocks are saying yes.

If the Jaguars happen to finish with the top pick in the 2014 NFL Draft, it means Blaine Gabbert was an utter failure. Undrafted free agents Matt Scott and Jordan Rodgers are nice stories, but Bridgewater looks like the next great quarterback prospect.

And another one from CBS.

1. Teddy Bridgewater, QB, Louisville (Jr.): He has a rocket for an arm, plays in a pro-style offense and has the size teams love. He will be the No. 1 pick next April.

Luke Hancock's beard made up 35 percent of the justification for this selection. The other 65 percent came from the time I refused multiple upgrade "recommendations" by the Valvoline guy during my last oil change.

CBS updates its way too early college hoops top 25 for next season and has Kentucky and Louisville in the top spots.

Russ Smith's return makes Louisville the primary competition for a Kentucky team that just might have the greatest recruiting class of all-time, at least on paper. Adreian Payne's decision to come back to Michigan State puts the Spartans in the discussion for the top overall spot -- and Oklahoma State went from off the board to a top-10 club after Marcus Smart spurned the NBA. Both Colorado and Marquette tumbled after key losses.

Rick Bozich, conversely, likes Louisville at No. 1 and Kentucky at No. 3.

3. Kentucky - This is two spots lower than the consensus forecast for the top-ranked Wildcats, but when in doubt I vote with veteran guards. The Wildcats will have more NBA Draft picks than anybody in the field, which means my next two picks will have to defeat UK with talent that is experienced in the task of ego management. And these two squads have shown that skill.

2. Michigan State - Tom Izzo took a monstrous chance by focusing all of his recruiting juice on Jabari Parker - and then finishing in a runner-up spot. The misfire isn't as damaging as it could have been now that Harris and Payne have decided to return, giving Izzo four returning starters, a very formidable bench and two late recruits.

1. Louisville - The last NCAA champion to return its leading scorer as well as the Final Four Most Outstanding Player was Florida - and then the Gators backed-up their 2006 title by winning another in 2007. Louisville returns its leading scorer (Russ Smith) and the Final Four MOP (Luke Hancock). Replacing Dieng and Peyton Siva won't be a joy, but the return of Smith, two more starters, four top subs and a solid quartet of recruits means that Rick Pitino's team is Number One until somebody proves that the Cardinals are Number Two.

Regardless of the order (it's probably going to be Kentucky, Louisville, Michigan State when the real polls come out), it's pretty clear that the decisions to return by Russ Smith and Adreian Payne have set up a "big three" heading into next season.

Someone has created a website devoted entirely to the photos Chane Behanan posts online.

Proper respect to our man, Francisco Garcia, who has done about as solid a job defensively on Kevin Durant over the past two games as anyone in the NBA has this season. Cisco got the start last night for the Rockets and wound up forcing the Durantula to give the ball up on the game's final possession as Houston notched its first win of the series.

U of L is hard after five-star class of 2014 star and former Louisville native D'Angelo Russell.

The Cardinals visited him at his school last week.

"They were like if I came to Louisville they would want me to replace Luke Hancock, and those would be the shoes I'd have to fill," said Russell, referring to the Cardinal senior-to-be who earned Final Four Most Outstanding Player honors.

"Those are big shoes, and they were like, ‘If you come, you've just got to be ready for it.' "

Russell said he viewed it as a blessing that the national champs deem him worthy to take over Hancock's position.

If you haven't been keeping up with Eric Crawford's "profiles of a champion" series, then you've been missing out.

Here are the profiles thus far:

If Logan Baumann gets less than 5,000 words, I'm boycotting WDRB.

You're probably aware that Rick Pitino is part-owner of Godlencents, but you might not know that the horse's jockey is going to be just the second African-American to ride in the Derby over the past 100 years. Here's a great profile of Kevin Krigger from the New York Times.

And here he is sporting a Louisville championship hat on the backside this morning: 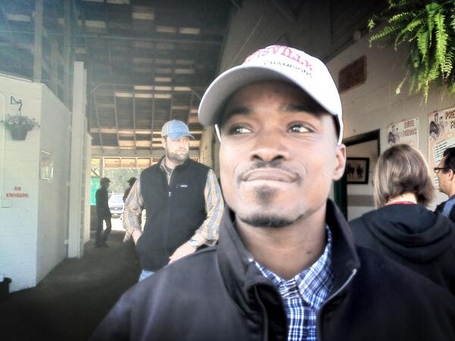 Speaking of Goldencents, here's a profile on his personality, which Doug O'Neill referred to earlier this week as "a mixture of Russ Smith and Peyton Siva."

Thanks to all of you who filled me in with the details of the shaver from the Luke Hancock/SVT beard shave event last week. Apparently his name is Jay White and he's an extremely popular guy who had a barbershop on campus ("Jay's Campus Cuts") before moving to his new locale over on Market St.

Always love getting the 411 on interesting folks. Well done, Jay.

Luke Winn, the king of college hoops power rankings, has Louisville on top of his post-draft deadline edition.

Russ Smith made the most surprising and impactful stay-in-school decision of this offseason, and he should be considered the early frontrunner for the 2014 Wooden/Naismith Awards. There will be plenty of time for Russ-praising in the lead-up to next season, though, so I'll use this space to look back at one of his teammates' remarkable shooting exhibitions in the NCAA tournament.

No one had a timelier hot streak than Luke Hancock, whose jump shots were worth an absurd 1.789 points per possession during the NCAA tournament -- more than twice their value during the Big East tournament:

That 1.789 PPP figure made Hancock the best jump-shooter in the bracket, by a wide margin:

Hancock stayed on a roll when he returned to Louisville, too: He and teammate Stephan Van Treese raised nearly $9,500 for Relay For Life by shaving off their tourney beards.

Winn has Michigan State at No. 2 and Kentucky at No. 3.

According to a tweet from Chris Jones, the junior point guard to-be has just one more exam left and will arrive at U of L on May 25.

The Louisville baseball team returns to the field tonight for a home game against Western Kentucky at 6 p.m. inside Jim Patterson Stadium. The Hilltoppers beat the Cards by 1 in Bowling Green earlier this month.

Kevin Ware and Luke Hancock kicking it in D.C. 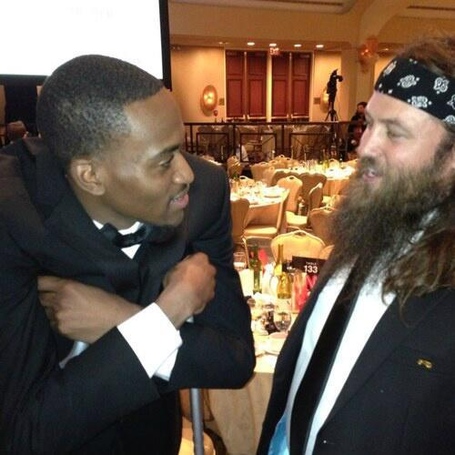 So it turns out that trainer Doug O'Neill, and not Rick Pitino, took it upon himself to dub one his new 2-year-old colts as "Three Point Luke." I guess "Bearded Assassin" was a little too esoteric. I get it.

Remember Brian Wardle, the freshman guard at Marquette who hit the shot at the buzzer that sent Mike Deane into a tirade on the Freedom Hall court? Well he's now the head coach at Wisconsin Green Bay and he's in more than a little bit of trouble.

According to the simulation work by the folks at What if Sports, the 2013 Louisville Cardinals are the 16th-best national champion since 1985, and the second-best of the three Cardinal championship squads.

Here are the numbers:

According to Alex Kline of The Recruit Scoop, Louisville offered class of 2015 power forward Cheick Diallo of New York a scholarship last night. Diallo is a 6'9, four-star prospect who is rated as the No. 24 prospect in the class by Rivals.

Gorgui Dieng is basically doing for the Commonwealth what Rocky did for Russian/US relations in Rocky IV. 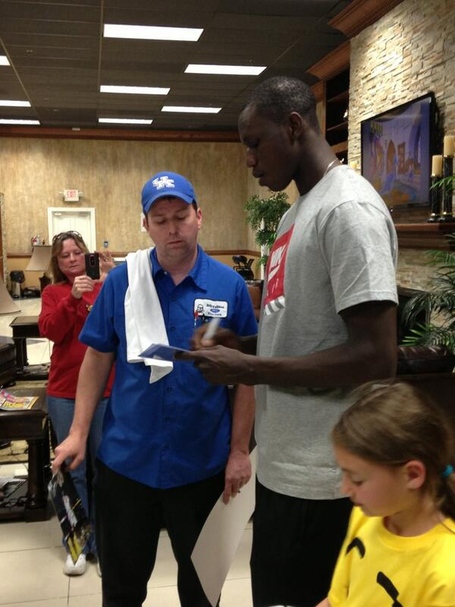 Sports Illustrated's early mock draft for 2014 has Teddy going at No. 2 behind only South Carolina star Jadeveon Clowney.

ESPN has Russ Smith as the second man on its way too early preseason All-American team for 2013-14.

Russ Smith, Louisville: Actually, "duh" will be a running theme for the early portions of this list. Like Smart, Smith was just too obvious to even consider for longer than, like, half a second. (It might not even have been that long.) He was the leading scorer on the defending national champions! Of course he's going to be a preseason All-American. Duh.

Thing is, I'm not sure the wider public really realizes just how good Smith was last season. Indeed, I remain convinced that Smith's struggles in the Final Four and his very visible Russdiciulous fugue state in Louisville's five-overtime loss to Notre Dame in February -- as well as how much of his value came on the defensive end -- essentially turned a significant portion of the casual college hoops viewing public (and voting media) off to the idea that Smith might well have had the best individual season in the college game. But for as good asTrey Burke was, that idea is worth considering, because at the very least it helps us put expectations for Smith's senior season in context. He could still improve as an outside shooter; there are still some rough edges to sand off here. But this may finally be the season Russdiculous the Endearing Crazy Sideshow gets the last laugh.

I hope everyone supports Jason Collins in a #Positive way. This world can be cruel.

The mugshot of former Kentucky and Syracuse player LeRon Ellis looks like someone who got take in for booking while trying on a Halloween wig. 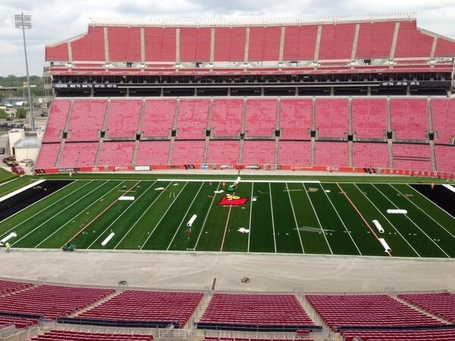 Something bad is going to happen to the first person who accidentally steps on that bird once it's in place. Something real bad. Like jaundice.