Share All sharing options for: Louisville Women Top Tennessee To Earn Their Own Final Four Trip

Tom Jurich has built an empire.

Rick Pitino, Charlie Strong, Dan McDonnell, Ken Lolla, Rex Ecarma and others have all made history during their time at U of L, but I'm not sure I've ever seen a better job done by a Cardinal coach than the one Jeff Walz has pulled off with this Louisville women's basketball team.

The Cardinal team that has been without standouts Tia Gibbs and Asia Taylor all season, the one that lost sophomore forward Shanta' Dyer to a torn ACL and MCL in December, the one whose senior captain, Monique Reid, has been limited by swelling in her left knee; that Louisville team is headed to the Final Four.

And they did it by knocking off No. 1 overall seed Baylor and second-seeded perennial powerhouse Tennessee in back-to-back games.

The latter of those colossal achievements came Tuesday night when the Cards got 24 points from Shoni Schimmel and dominated the Volunteers for the bulk of the 40-minute contest.

"We ruined the entire party," Louisville coach Jeff Walz said. "We're the ugly ducklings that ruined the party. No one gave us a chance and we shocked everybody. It's a journey and we're going to continue."

Did I mention that Tom Jurich signed Walz to a monster contract extension before this season? 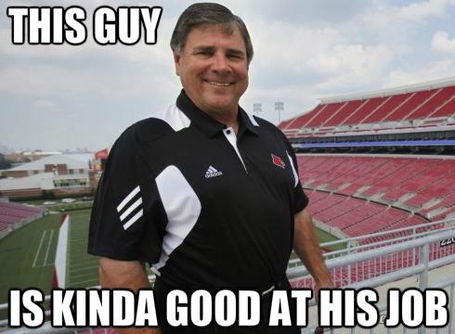 Louisville becomes just the eighth program to land both its men's and women's basketball team in the Final Four in the same season. It's also just the 10th time the feat has been achieved.

Additionally, the Cardinal women are just the second fifth seed to ever make it to the national semifinals. If they defeat Cal, the second-seeded champions of the Spokane Region, they'll become the first team seeded higher than fourth to ever win a Final Four game. Louisville will face the Bears on Sunday at 6:30 p.m.

Connecticut is the only program to ever win both the men's and women's national championships, a feat they pulled off back in 2004. 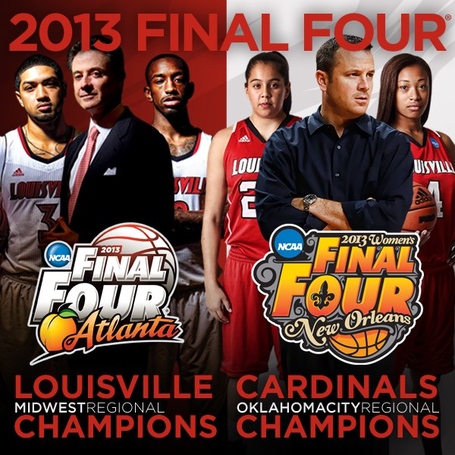 The victory by the Cardinals means that five of the eight teams in the men's and women's Final Fours hail from the Big East conference. Not a bad send-off for a league which, for all intents and purposes, will cease to exist after this season.

Seriously though, there's never been a better time to be a Louisville Cardinal fan than right at this second.