I've never been a big fan of the "L1C4" mantra. There, I said it. Mostly because it sounded kind of funny and seemed like a hokey thing that the marketing department on Floyd Street came up with for Twitter Trends. 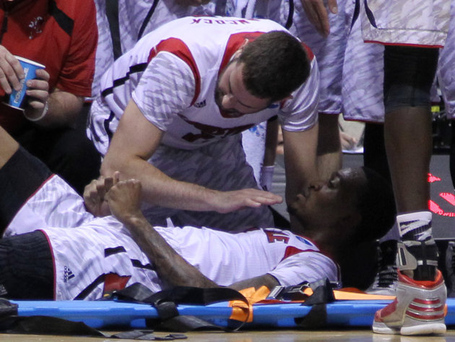 What I witnessed when Kevin Ware collapsed to the floor in Indianapolis yesterday afternoon was disturbing. What I saw, and then subsequently learned about the immediate aftermath of the situation that unfolded, was nothing less than extraordinary. After a little reflection and comparison with my own real life experiences, I felt the need to express a few things to this wonderful community of Cardinal fans.

I spent four years in the United States Navy from ages 19-23. In those four years I built bonds with people that have endured the tests of time, and will probably last forever. I spent those years working as a firefighter on the flight decks of aircraft carriers; I had the misfortune of seeing an F-14 crash on takeoff, three other aircrafts engulfed in flames, and numerous injuries to flight-deck personnel.

I can tell you that the mantra of "All of us before myself (L1), and true brotherhood (C4)" was personified by Kevin Ware and Luke Hancock yesterday.

I'm not saying that a basketball game is the same thing as a wartime situation. What I'm saying to you is simply this: when Kevin Ware pulled himself together, and fought off what had to be excruciating pain, to deliver the selfless message of "win this game," he put his team before himself. When Luke Hancock ran towards Kevin, as others were running from the gruesome scene, he displayed the awesome strength of the bonds that have been formed among this group.

There's no shame in being someone who couldn't handle what unfolded in front the Louisville bench yesterday. Some people are born with the "immediately run towards trauma/ emergency situations to help" gene, and some are not. Most people are able to rally and do what needs to be done after composing themselves, and that was true of the entire team yesterday.

I can tell you this much, you don't go running towards something like that, the way that Luke did, and stay by someone's side the way that he did without having a love for your brother in arms. You don't choke back tears and pain the way that Kevin did yesterday without truly believing that you are a part of something bigger than yourself. Those young men made me proud to be a Louisville fan yesterday, more proud than I have ever been.