Share All sharing options for: Rick Pitino Gets Special Gift From Son Richard For His 300th Win At Louisville

Rick Pitino made some waves last October when he stated publicly that he listens to Pitbull every morning during his short commute to work.

Knowing this, son Richard decided to make a major play and get his dad something special in celebration of the elder Pitino's 300th win at Louisville. 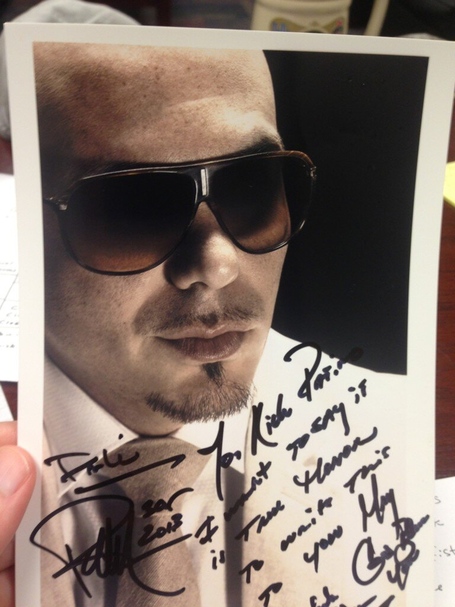 I'm not 100% certain, but I believe that reads: "For Rick Pitino, I want to say it is true honor to write this to you." And then of course you've got your "Dale" underlined up there at the top. Classic Pitbull.

They can't. They won't. Ever. Stop DePaul Day.

While we're on the subject, I suppose this is as good a time as any to say congratulations to Richard on a remarkable first season at Florida International.

When he accepted the job last year, I said that it was a mistake for two reasons. First, because he could have held out for something better. Second, because it was a place where it was impossible to win right away. I've been proven completely wrong by Pitino, who has managed to lead the Panthers to their first winning season since 1999-2000.

FIU is the No. 4 seed in the Sun Belt Tournament, and will begin play against Arkansas Little Rock in the quarterfinals on Saturday. Best of luck to Richard and his squad down in Hot Springs.