Senior Night Sentimentality: Mike Marra, The Quote He Did Not Say, and How He Helped Redefine UofL Basketball

Bad luck and unreasonably high expectations will be dominant memories, but we'll always have the first few months of the 2010-2011 season.

Share All sharing options for: Senior Night Sentimentality: Mike Marra, The Quote He Did Not Say, and How He Helped Redefine UofL Basketball

Mike Marra's whole basketball career will be colored by something he didn't say, which may have been true at the time it was said and still may be true. It will be told over and over again as an anecdote, quickly followed by a general reference to "injuries derailing" his playing career, charitably, or used as a data point on the credibility of the original speaker. It will follow Marra even though it says more about the person who said it than it does about Mike Marra and his "unfulfilled potential." Mike Marra didn't ask Rick Pitino to call him the best high school shooter he had ever seen, but that quote will follow him for the rest of his life.

Here's what Jody Demling (then of the Courier-Journal) posted at the time, about Marra's reaction, with the all-time greatest picture below:

University of Louisville signee Mike Marra said he was 'speechless' when he heard his future coach - Rick Pitino - say he was the "best shooter he had ever seen.' 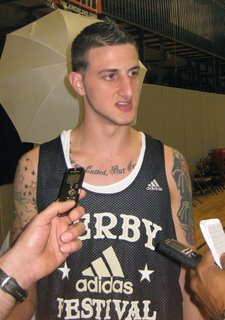 Mike Marra's shooting failed to live up to Pitino's hype from the opening tip of the 2009-2010 season. He started his Louisville career 0 for his first 6 threes, 4 for his first 17 and 7 for his first 28, including a 3-11 showing in a 22 point home loss to Charlotte. I was at that game and it seems like a million years ago. Anyway, the next 7 games he had two DNPs and averaged less than 5 minutes per game when he did get in.

Then, all of a sudden, Northeast Mike Marra (NEMM) was born:

Some uneven games followed. NEMM returned and Mike had his best game of the season, hitting some big shots (even though he went 4-12 from 3 overall) and getting some key rebounds. There's video evidence of it here:

After that game, we apparently didn't play in the northeast again (and Reggie Delk came back from injury) as Marra DNP'd in 3 games and never played double digit in minutes in the games he actually got time in. No one expected Marra to come in and steal a lot of minutes from Kuric, Delk, Jerry or Preston. Without Pitino's quote, the big games he had and the energy he brought would have made it a decent debut. But, because of the hype, Marra's freshman season was generally seen as a big disappointment.

The Bridge Year (aka The Curse) (aka The Faried No-Call)

More on this in the Siva post (sobbing) but the 2010-2011 season was such a crazy ride, and Mike Marra was a big reason why. He still wasn't the consistent knock down shooter we hoped for, but his "basketball player" mentality - like passes so good that we coined the #MarraPass hashtag - typified the "Louisville First" motto. Here's what I wrote in an early season post about that team:

But after two games, one thing is clear: I can really see myself liking this team. They play hard, they play unselfish, they make passes and know that they'll get it back, they make layups (especially Chris Smith!), they run, run, run and they seem to really actually like each other.

Watching Marra highlights from the first few games of the season, it is hard to believe it is the same guy who barely played a few months earlier:

Marra averaged double figures for the first 6 games of the season, capped off with a 23 point performance on 5-14 (!) from 3 shooting in a 27 point win over South Alabama on December 4th. He was playing very, very well.

Then, on December 7th, I wrote:

hands down, Mike Marra has become our best player. He is hot from 3, he's dunking all over the place, he passes well, he seems to be playing good defense (hard to tell) and he doesn't really make mistakes. The funniest thing about the Marra thing is that throughout the preseason, Pitino said the only two certain starters were Siva and Kuric. Either Kuric was playing like LeBron in practice or Marra just does better in games than Kuric, who has had a rough start to the season. Regardless, I don't think the Marra thing is a fluke

On December 8th, the very next game, Marra played 22 minutes in a 26 point blow out, but shot an abysmal 1-9 from 3 point range. He went 0-5 and 0-2 in his next two games, "improved" to 2-6 in a blowout win against Gardiner-Webb and then missed a couple games due to injury. When he came back, outside of NEMM returning against Seton Hall, and a decent 11 point, 3-7 from 3 game against USF, Marra scored in single digits the rest of the way except for 2 games (both of which were big wins: home against Pitt in the cheerleader game, and against Marquette in the Big East tournament).

This isn't about me and a supposed curse, but, seriously though, watch the first few games of the 2010-11 season and tell me that the Mike Marra you see doesn't look like a superstar?

Regardless, even though Marra was never quite the same as he was in the start of the season, he still managed to be involved in some of the biggest moments of the year. Specifically, in the UConn game, Marra was 2-3 from 3 including the "oh that's a big three" three in OT. And, more importantly, it was Marra's steal (on Senior Night) that set up what is arguably the defining moment of the 2010-2011 season (and therefore, I will argue in the Siva post) the defining moment of, and I say this with just a hint of Pitino exaggeration, the best years of Louisville basketball outside of 1980-1986. I don't even have to link to it and you can hear it in your head. Click on the link and see for yourself: not only was it Marra who stole the pass, it was none other than Bryce Cotton who tripped Siva in the first place. On Preston(!)'s Senior Night. Life is weird.

Maybe the biggest moment of all, though, was the one on which the 2010-2011 season ended: Marra's 3 pointer against Kenneth Faried that even the announcers thought was a foul, but then the refs just sprinted off the court and it was all over. Literally almost made Rick Pitino hang it up for broadcasting. Fitting that Marra made the first shot of the season (check the Butler highlights above) and missed the last one.

Marra played 1 full game in 2011 and then late in the Lamar game, looked like he just stepped wrong, tore his ACL, and has not played a minute of basketball for the Louisville Cardinals since that day, November 13, 2011. Because life is weird, that was literally the only game I've ever taken my son ("MarraFan427") to, and Mike was so kind as to specifically blame me and my family for Marra's injury. Then, after a full season rehabbing and great reports from practice, devastating news: torn ACL in his first practice back. Career over. Marra's reaction said it all: "You know, Fred, it wasn't meant to be. So I'll get a head start on coaching."

It's hard not to wonder what Marra's career would have been like without Pitino's exaggeration, without the injuries. Watching this clip now is especially poignant because we know what happens afterwards, how the story - on the court, at least - ends.

But Marra's life story is not yet written. He is likely going to have a successful career in basketball. He will become part of the Pitino coaching tree, and who knows where that will take him. All we know now is that when he was healthy, when we needed him, when our team and program needed a new identity, Marra's passing, team-first, unselfish, run, run, run, style was the perfect model and set the tone for three of the most memorable seasons in Cardinal basketball history, and whatever comes next.