Five Things You Should Know About Oregon

Share All sharing options for: Five Things You Should Know About Oregon

Because they play late and I'm often up late, I watched more Pac-12 basketball this season than any reasonable human being should (ask me something about USC...f'ing do it). Unfortunately, the one team in the league I feel like I didn't see enough of was Louisville's Friday night opponent, Oregon.

All told, I've seen all or parts of four Oregon games this season: Their overtime win at Washington State in January, their Pac-12 title game win over UCLA, and their two wins in the big dance. I've partly used those experiences to lay out the following five characteristics you should know about the Ducks heading into tonight's game.

1. Their Freshman Guards Are Talented, But Excitable

By now you've probably heard at least a little bit about Oregon's youth at the guard position and their propensity for turning the ball over. Well, you're about to hear a little bit more.

The Ducks turn the ball over a little more than 15 times per game, a number that's due partly to the freshmen backcourt duo of Dominic Artis and Damyean Dotson (although to be fair, it's forward E.J. Singer who's the team's worst offender). In two NCAA Tournament games, Oregon has coughed the ball up a whopping (whopping!) 36 times (Singler has 12).

Obviously, this is not an ideal characteristic for a team about to play Louisville.

But despite their flaws, Oregon's guards have more than enough skill to carry them to a victory over just about anyone in the country.

Artis is probably the player you're the most familiar with. He missed all of February with a foot injury, and the Ducks went from the top 10 to out of the top 25 without him. He hasn't played as many minutes since returning to the court as he did before the injury, but he's still a vital part of the UO attack. His shiftiness and spotty outside shot reminds me a little bit of Russ Smith (although Russ is a much better shooter). He'll do most of his damage in transition, but he's a terrific passer who's gotten better at taking care of the ball as the season has gone along.

Dotson enters Friday night as easily the hottest player at Dana Altman's disposal. In five postseason games, he's averaging a team-best 16.8 points while shooting 48.4 percent (30 of 62) from the field and 53.3 percent (16 of 30) from beyond the arc. He dropped a career-high 23 points in the upset of Saint Louis last Saturday. Dotson's best asset against Louisville's shorter guards is his 6'5 height, which will force guys like Luke Hancock and Chane Behanan to be aware of where he is on the court at all times when the Cards are in zone. He's not a terrific ballhandler, but he doesn't need to be in Oregon's offense.

The third member of the guard triumvirate is junior Johnathan Loyd, who averages just 5.0 ppg, but earned Pac-12 Tournament MVP honors in Vegas two weeks ago. Loyd might be the most skilled ballhandler of the bunch, but he's turnover prone if you can speed him up. After throwing the ball away just four time in three Pac-12 tourney games, he's given it up nine times in the Ducks' two games in the big dance. He gets most of his points either at the rim or the free-throw line, but he is capable of knocking down the occasional outside shot if he's left alone.

2. Arsalan Kazemi Is An Animal

It's sort of ironic that Pitino has used Kenneth Faried as a teaching tool so many times this season, because there isn't a player left in the tournament who resembles Faried more than Oregon's Arsalan Kazemi.

Now Kazemi doesn't have nearly the physical gifts that Faried had when the Cards faced Morehead State two years ago, but he does have the same desire for rebounding and the same knack for finding the ball. He's also a more polished offensive player than Faried was.

Kazemi leads the tournament in rebounding after pulling down 17 against Oklahoma State and 16 against Saint Louis, a mark which ties him for the career tournament record at Oregon. He's scored 19 total points on 8-of-15 shooting, but Kazemi can hurt you in other ways when Oregon has the ball. He's a terrific passer and a guy who really understands the game.

If you were thinking that his name sounded familiar, Kazemi played his first three seasons at Rice and flirted with transferring to Kentucky at one point last summer. Had he done so, it could have altered UK's season in a fairly dramatic fashion.

If Oregon does pull off the unthinkable tonight, this is going to be the guy who made the huge putback dunk or kept all those possessions alive that made you pull your hair out. This is the guy whose name we'll be cursing all offseason.

3. They Have Crazy Uniforms

Have you guys seen this? Have you heard about this? 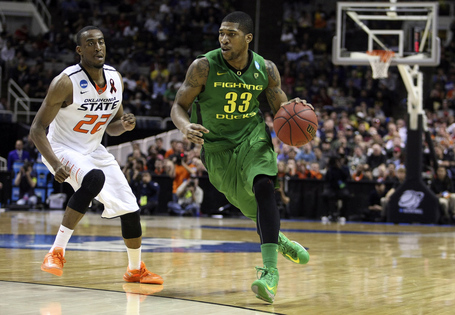 They wore darker green unis against Saint Louis two days later, so who knows what the look will be tonight. Regardless, expect a good old-fashioned crazy uniform-off tonight in Indy.

Singler, the younger brother of former Duke standout Kyle Singler, leads the Ducks in scoring (11.6 ppg), is tied for the team-lead in assists (103) and is UO's biggest outside threat.

His play also has a tendency of reflecting the way a game goes for the Ducks.

Oregon has lost eight times this season, and in six of those games Singler was held to less than 10 points. Included in that group is a pair of 2-point performances against UTEP (made more amazing by the fact that the game went to three overtimes) and Colorado. Singler has failed to make at least three field goals eight times this season, and Oregon is 3-5 in those games.

5. It's Where Tony Woods Wound Up

The Tony Woods saga was one of the more bizarre that has taken place at Louisville over the past five years or so.

For the uninformed, Woods was kicked out of Wake Forest after being involved in a physical altercation with his girlfriend. After being pursued by a number of schools, and it being reported that he was "likely" headed to Kentucky, the 7-footer ultimately chose to come to U of L. The decision by the coaching staff to accept Woods was one of the more controversial I can remember.

Woods came to Louisville and laid low for a year while he sat our per NCAA transfer rules. There were a few reports here and there about him playing pickup ball, and a couple of published reports about him volunteering at the Daniel Pitino Shelter in Owensboro. Other than that, he remained a man of mystery.

Then Tim Fuller bolted for Missouri and suddenly Woods didn't want to be a Cardinal anymore. He quietly wound up at Oregon, where he's put up respectable numbers over the past two seasons. He enters tonight's game averaging 9.1 points and 3.6 rebounds, and he scored a career-high 19 points against Washington in the first round of the Pac-12 Tournament two weeks ago.

Bonus Knowledge: They're Going To Press Us