Milton Russ doing what all dogs in Louisville should be doing this afternoon: Wearing U of L jerseys and eating Ducks.

Rick Pitino has crafted an NCAA Tournament favorite despite not having an elite roster loaded with future NBA talent.

But No. 1-ranked Louisville enters the Midwest Regional semifinals Friday as a potential antidote to that premise, which has been overwhelmingly accurate over the past 20 years. Though the Cardinals are favored both by seeding and Las Vegas odds to cut down the nets in Atlanta on April 8, Rick Pitino has gotten here by building a roster deep with good players, practically none of whom would be described as sure-fire NBA prospects. Just one Louisville player - junior center Gorgui Dieng - would likely be picked in the first round of this year's draft.

"Pitino has squeezed the hell out of those guys," said one NBA player personnel director, who spoke to USA TODAY Sports on the condition of anonymity because league rules prohibit discussing underclassmen. "I don't see any of them being consistently in a (NBA) rotation. I'm not even sold on Dieng."

Two other league executives - one in both the Eastern and Western Conferences - shared that view of the Louisville roster, projecting Dieng as a late first-round pick and junior guard Russ Smith as a possibility in the second round. And though several other Cardinals will be on the NBA's radar including senior point guard Peyton Siva, sophomore forward Chane Behanan and freshman forward Montrezl Harrell (who might be the best long-term prospect of the group), it is atypical for such a powerful college basketball team to draw so little excitement from NBA scouts.

Oregon has been riding a hot offensive streak in recent weeks, but so has Louisville.

You only have a couple of days left to vote Russ Smith Best Chef in Louisville.

tmjoel01 coming through once again in the clutch. 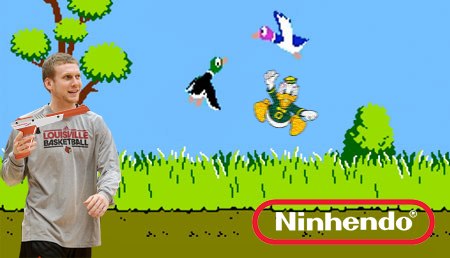 Both teams are fully aware of what the biggest key tonight for Oregon is.

Oregon turns over the ball 15.1 times per game, which is 299th in Division I. Louisville just got done forcing a combined 44 turnovers from North Carolina A&T and Colorado State with a jazzed-up press they rarely used in Big East competition. They figured to retreat to their soft press and 2-3 zone as soon as they faced a serious Final Four contender. But now?

"We've got to do a better job handling the ball against them," Ducks coach Dana Altman said. "They do extend their pressure. They do a great job at changing it up.

"We're not, in three or four days, going to change the way we've played all season. We've got to try to clean it up a little bit. But we're going to make mistakes. We've just got to play through those mistakes. We've been able to overcome our turnovers in most situations."

So Digger Phelps went ahead and made it official this morning by picking Oregon to upset Louisville during his segment on SportsCenter. He did so while wearing a neon green tie to go with his neon green highlighter.

Old heads always going to have something to say.

Speaking of Digger, his predicted national champion - Miami - was bounced by Marquette last night, which forced this website into a massive overhaul.

One of the biggest reasons Oregon is in this position is the surprisingly hot postseason hand of freshman guard Damyean Dotson.

To get here, Oregon (28-8) rode the hot hand of Dotson, a 6-foot-5 freshman from Houston's Yates High School. Armed with a cool, quiet swagger, Dotson scored a career-high 23 points last Saturday in the Ducks' upset of No. 4 Saint Louis to advance to the Sweet 16 for the first time since 2007.

"This is a big stage and it's very exciting," Dotson said Thursday after the team's first workout at the home of the NFL's Indianapolis Colts.

In five postseason games, including three Pac-12 Conference tournament victories, Dotson is averaging a team-best 16.8 points while shooting 48.4 percent (30 of 62) from the field and 53.3 percent (16 of 30) on thee-pointers.

"To be honest, I don't even know," he said when asked about his recent shooting. "I'm blessed. It's been going good for me, and it's been a blessing."

5. Scrooge McDuck
4. Howard the Duck
3. The duck at Cave Hill that tried to bite me when I was five because I got too close to a dead fish
2. Quacky
1. Lester Averman

Along the same lines, just call him Rick "The Dentist" Pitino. 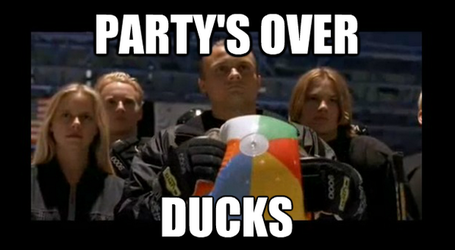 Three years ago E.J. Singler was watching his brother, Kyle, win a national title in Indianapolis with Duke. Tonight he gets his own shot at Indy glory.

Indianapolis also has a special place in the heart of Oregon coach Dana Altman.

Oregon provided Altman the resources of a major-conference program, a familial atmosphere in Eugene, Ore., which Altman sought, and a fresh slate. He has responded by taking the Ducks, picked to finish seventh in the Pacific-12 Conference before the season, into the N.C.A.A. tournament's Round of 16 for the first time since 2007.

It is purely coincidental that the genesis of Altman's hiring at Oregon stemmed from a four-hour meeting with the then-athletic director Pat Kilkenny at the Conrad Hotel in Indianapolis, blocks from Lucas Oil Stadium, where the 12th-seeded Ducks face top seed Louisville on Friday.

The folks over at Addicted to Quack are viewing Rick Pitino's flawless record in the Sweet 16 as a sign that he's due.

A quick congratulations to former U of L QB Adam Froman, who has been hired as the quarterbacks coach at Valdosta State University

Tarc buses in the city are pretty pumped about all of this. 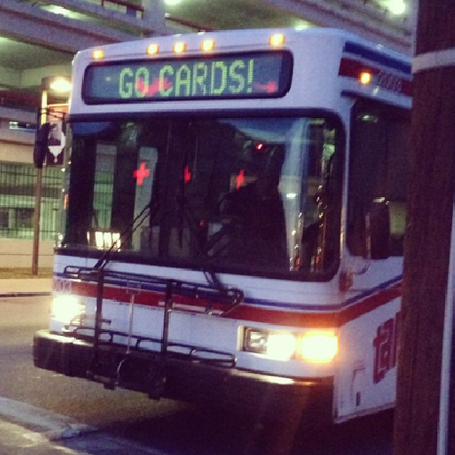 As of this morning there were just 1,000 tickets remaining for tonight's session in Indy.

So Indiana used Louisville as its model to prepare for Thursday night's game against Syracuse. Not sure they were watching the right tape.

Also, I wonder how these bros were feeling this morning:

IU admins at Lucas Oil just came up to Oregon newspaper guys and said, "Alright Oregon, let's get it done."

The television ratings for the first weekend of the NCAA Tournament were the highest they've been in 23 years. Weird, Kentucky didn't make the big dance that year either.

Cool close up shot of a 1986 championship ring: 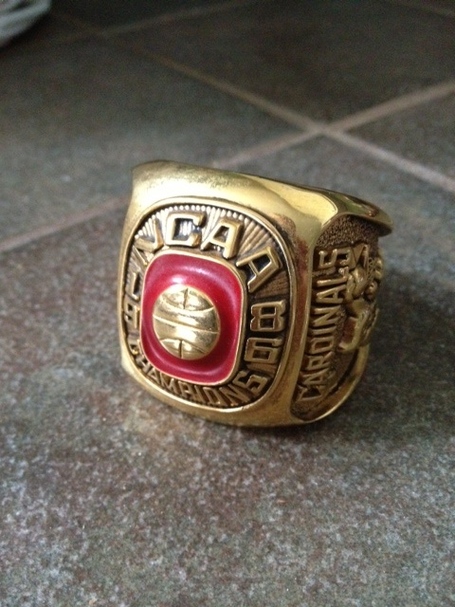 Edgar Sosa and Russ Smith both get some solid love in this Esquire piece.

More than once this week, Altman has compared the way Louisville plays basketball to the way Oregon plays football.

Yeah, Dana Altman and his Oregon Ducks know exactly what they're up against with Louisville and that hair-on-fire defense. They've been watching the Oregon football team wreak the same kind of havoc for years now.

"It's almost the same situation that our football team runs into when teams are trying to get ready for them. They play so much faster and their team speed is different," Altman said Thursday. "I don't think teams can really get ready for our football team. ... And I don't think we can prepare for the speed of Louisville: their quickness, their guard quickness, their overall team speed and the different looks they throw at you.

"They beat people up mentally as much as physically," Altman added. "If you're not focused, if you make a mistake, they get those runs that they just turn a game around."

The biggest key in Louisville's recent surge might be the increase in production they've received from their bench.