Share All sharing options for: Louisville Women Secure Their Own Sweet 16 Spot

The Sweet 16 just got a little bit sweeter in Louisville oh my God I can't believe I just wrote that put me down right now.

In front of an energetic crowd of 9,236 (mostly) red-clad spectators, the fifth-seeded Cardinals took care of business against No. 4 seed Purdue on Tuesday night, 76-63. Sara Hammond was the star of stars for U of L (26-8), scoring 21 points to go with her 10 rebounds.

"I'm as proud of this basketball team as I was of our team that played for a national championship in 2009," Louisville coach Jeff Walz said. "With the amount of injuries that we've sustained, and they're not just one week, two weeks you miss. We've got kids that are missing the entire season. We've had Mo (Monique Reid) playing on one leg. We found a way to continue to play."

To get this far is a remarkable achievement for the Cardinals, who have been without standouts Tia Gibbs and Asia Taylor all season, and lost sophomore forward Shanta' Dyer to a torn ACL and MCL in December. Additionally, senior Monique Reid (who celebrated a birthday on Tuesday) has been limited by swelling in her left knee. 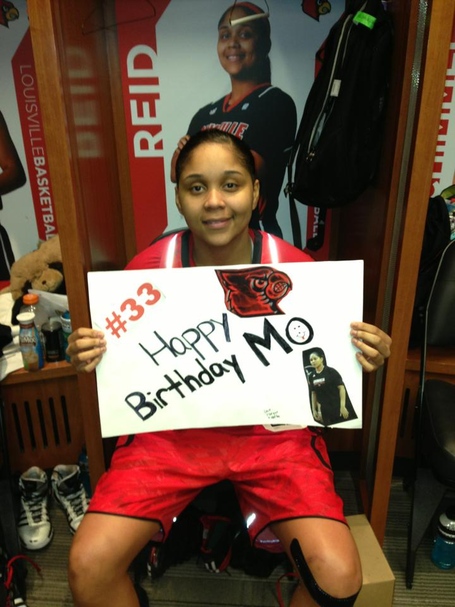 She fought through the pain on Tuesday and played 23 huge minutes.

The road doesn't get anywhere easier for the Cards, who will face defending national champion and No. 1 overall seed Baylor in the Oklahoma City Regional semifinal on Sunday at approximately 7 p.m.

Kudos to the fans (including the Pitino clan and several members of the men's basketball team) for showing up and helping this team to its biggest win of the season, and double kudos to Jeff Walz and the Cards for what has already been a terrific postseason run.