If you did a word cloud of every tweet from UofL fans freaking out about this Colorado State game, I think the three biggest words would be "REBOUNDING" "TURNOVERS and "SENIORS". The time for flowery language and What It All Means and team of destiny talk is during the week. This is game time, and with stakes this high, it helps to try to look at the numbers and figure out rationally what is or may be going on in this game. The two teams they have been compared to from the Big East are Pitt and Notre Dame. Obviously those teams have been tough games for us, both this season and in previous ones. They don't shoot the 3 as well as ND, but they play well together and, if they even have half of ND's poise under our pressure to be able to make the EXACT perfect pass, our defense may not be as effective against them as against some other teams.

Because of this, it sounds like Rick is leaning towards more PT for one Stephan Van Treese. I don't like the idea of starting him because we are in a groove with our rotation as it has been for the last 10+ games. However, SVT and Gorgui playing together can work, and if Chane can't grab and hold onto rebounds, we may see it before the under-16 timeout. I don't like the pre-game adjustment until you actually see that we can't hang with them on the boards AND it may be outcome determinative.

Even more disconcerting, as a senior-led team that doesn't turn the ball over, Colorado State seems to be, on paper, our worst nightmare. Even their relative lack of 3 point shooting is all of a sudden a thing to worry about: they shot 7-14 against Missouri Thursday night. If they shoot 50% from 3 with 7+ makes, don't turn the ball over and out rebound us by double digits, I mean, ya, that's a tough game to win.

They also, at least publicly, don't seem to be intimidated by our reputation. Crawford has a great piece on Larry Eustachy (who was apparently on the short-list to replace Crum if Rick said no) and his seeming indifference to our team. The biggest thing to me - and for some reason I cannot get over this - is that Eustachy claims he didn't know any of our players' names. I can't get over this for two reasons: 1) how can that be true? 2) If it's not true, why would he say it? 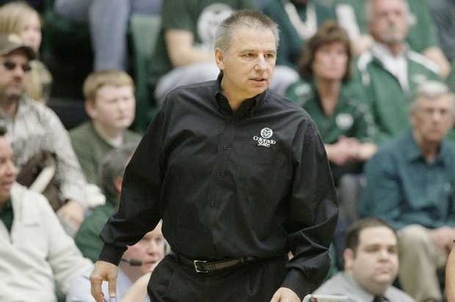 The players don't seem intimidated either, which is fine. Notre Dame, Nova and Syracuse were not intimidated by us. I cannot fathom that an 8 seed doesn't take a 1 seed seriously, especially the overall No. 1 seed playing an effective home game. We are all so accustomed to bland pregame quotes by coaches and players, but of all the attitudes to take in this game, I don't understand how downplaying us or acting like our pressure is nothing they haven't seen before is the right attitude.

Because looking at Colorado State's record, one big thing jumps out: they are 16-1 at home (in an 8,000 seat gym), 6-6 on the road and 4-1 in neutral games. The Mountain West has had an awful tournament so far, with Colorado State being the only winner thus far (pending San Diego State game), and CSU split the home/home series with every Mountain West tournament team (UNLV, Boise State, San Diego State), lost both games to New Mexico and lost to Colorado on the road and UNLV in the (Las Vegas-based) Mountain West tournament. They also ended up 20-1 against the teams ranked 51+ in the RPI, their only loss being a head-scratcher to University of Illinois-Chicago. 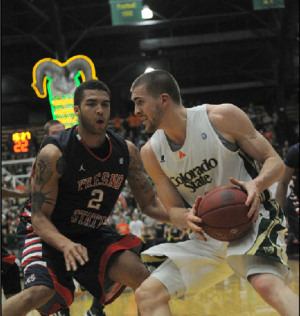 Further, they don't really play efficient defense: KenPom has them ranked 97th, slightly above the national average, and anecdotal evidence suggests they don't pressure the ball, preferring to rebound your misses than prevent you from even shooting in the first place. They aren't very deep, and their starters play a ton of minutes. And, bluster notwithstanding, they have likely never seen a defense like ours, in a Saturday afternoon game with the crowd heavily in our favor, or the depth and talent we have. The closest teams to us in talent in the Mountain West are UNLV and New Mexico, and they were 1-4 against those 2 teams, with the only win coming at home by 5 points in January.

So, on paper, this isn't as bad of a matchup as it could be. But, the game isn't played on paper, and in a one-and-done tournament, if they go off from 3 (which NC A&T did in the first half and Marquette did in the last minute) and we can't make open shots, and aren't getting any second chances, well, it could get tense.

Nightmare Scenario: Eustacy's pre-game working of the refs (from Crawford's article: "You know, from an officiating standpoint, they grab, they reach and it becomes so common, you know, and I have no problem with it, but we just have to be men and be strong with it and not let them jar it loose because I think we're going to get it for 40 minutes.") leads to two quick fouls on Siva and/or Russ, which both limits our offense and prevents us from speeding the game up and getting turnovers. CSU shoots out of their mind from 3s and gets every missed 2, puts it back and then we miss open shots, we lose the game.

Do I really think that will happen? No, probably not. I said on Twitter earlier, this feels like either one of those OK/Stanford type blowouts where the other team has no idea what to do, or a Texas A&M/Sienna type game that is slow, whistle-heavy, grinding, and close until the very end. Don't really see anything in between being crazy likely - don't think CSU will blow us out, don't think this will be a game we are leading by 4-8 for the whole game, never put away until the end and CSU matching us point for point.

I will be more and more nervous as we approach this game, and by tip-off I will be convinced that rebounding margin is the most important stat in the history of college basketball. But it isn't, and I'm not playing, and I really hope that we can enjoy this game because, like life, the college basketball tournament is frustrating and terrifying and amazing and can end at any moment. While it feels good to thrive, sometimes all you have to do to advance is survive.